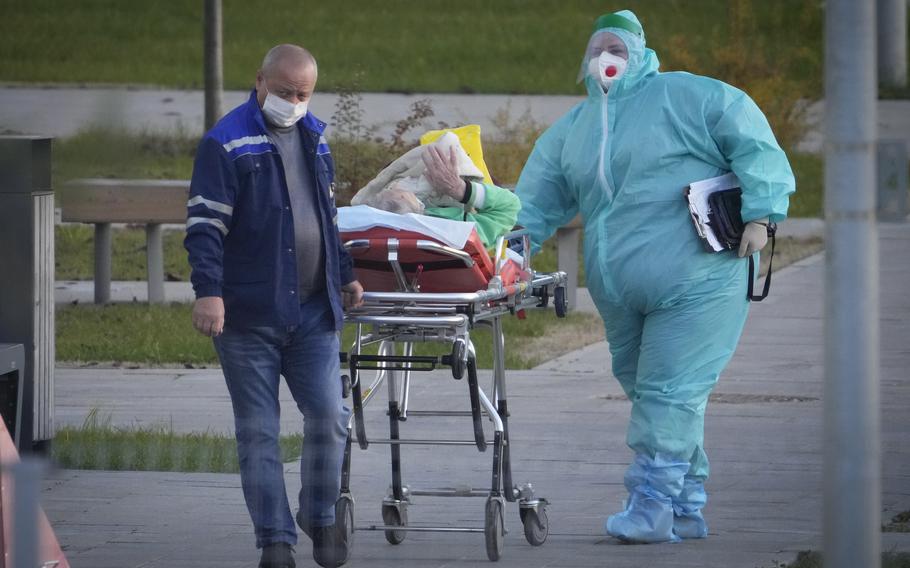 Medical workers carry a patient suspected of having coronavirus on a stretcher at a hospital in Kommunarka, outside Moscow, Russia, Monday, Oct. 11, 2021. Russia’s daily coronavirus infections and deaths are hovering near all-time highs amid a laggard vaccination rate and the Kremlin’s reluctance to toughen restrictions. Russia’s state coronavirus task force reported 29,409 new confirmed cases Monday. That’s the highest number since the start of the year and just slightly lower than the pandemic record reached in December. (Alexander Zemlianichenko/AP)

MOSCOW — Russia on Thursday recorded the highest daily numbers of coronavirus infections and deaths since the start of the pandemic, a rapidly surging toll that has severely strained the nation's health care system.

The country has repeatedly marked record daily death tolls over the past few weeks as infections surged amid a slow vaccination rate and lax enforcement of measures to protect against the coronavirus.

Prime Minister Mikhail Mishustin said Tuesday that about 43 million Russians, or just about 29% of the country's nearly 146 million people, were fully vaccinated.

Russian President Vladimir Putin has emphasized the need to speed up the vaccination rate, but he also has cautioned against forcing people to get vaccine shots.

Despite the mounting toll, the Kremlin has also ruled out a new nationwide lockdown like the one during the first months of the pandemic, which badly crippled the economy and dented Putin's ratings, while delegating the power to enforce coronavirus restrictions to regional authorities.

Asked if there is a level of contagion that would force the Kremlin to impose a lockdown, Putin spokesman Dmitry Peskov said that each of Russia's 85 regions will make a decision depending on the situation.

He noted that the country's health care system has the resources and experience needed to cope with an influx of COVID-19 patients, adding that it would allow authorities to avoid lockdowns for "as long as the health care infrastructure isn't overwhelmed and remains in a working condition."

"When the situation approaches a critical point where a regional health care system becomes unable to treat incoming patients the authorities may make the relevant decisions," Peskov said in a conference call with reporters.

Some Russian regions already have restricted attendance at large public events and limited access to theaters, restaurants and other places. But life remains largely normal in Moscow, St. Petersburg and many other Russian cities with unrestrained access to restaurants, cafes, nightclubs and other venues.

Murashko said that more than 1.1 million COVID-19 patients are currently being treated at hospitals and at their homes, adding that the number is putting a "high load" on the nation's health care system.

He noted that 42% of Russians older than 65 received the shots, adding that the proportion in the most vulnerable category of the population was clearly insufficient.

Amid the growing strain on the health care system, authorities have offered retired medics who were vaccinated to return to work, Murashko said.

However, the state statistics agency Rosstat, which also counts deaths where the virus wasn't considered the main cause, has reported a much higher toll of pandemic deaths — about 418,000 deaths of people with COVID-19 as of August. If that higher number is used, Russia would be the fourth hardest-hit nation in the world, surging past Mexico.

Follow AP's coverage of the coronavirus pandemic at https://apnews.com/hub/coronavirus-pandemic