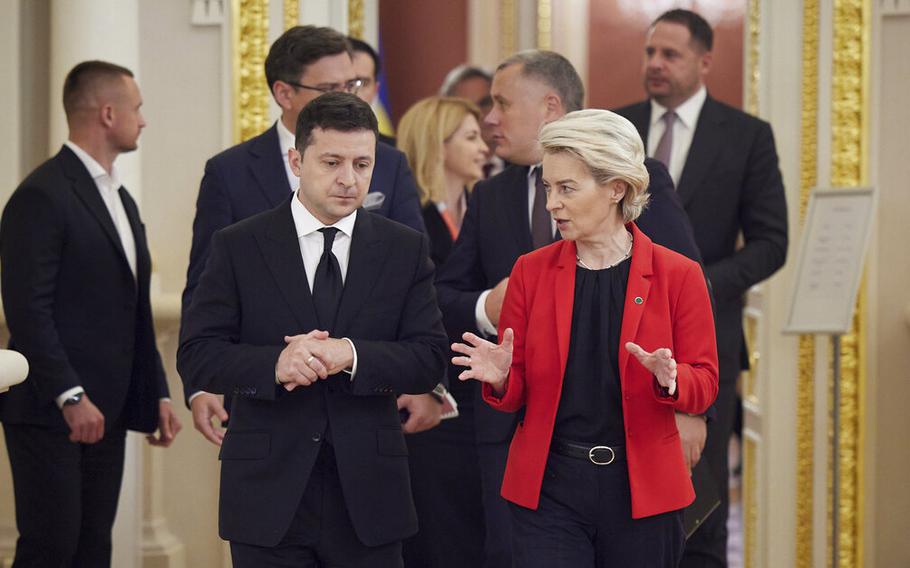 Ukrainian President Volodymyr Zelenskyy, left, and European Commission President Ursula von der Leyen share a word as they meet on the occasion of a Ukraine EU summit, in Kyiv, Ukraine, Tuesday, Oct. 12, 2021. The 23rd summit between the European Union and Ukraine is held in Kyiv. (Ukrainian Presidential Press Office via AP)

They emphasized that further reforms and regulatory changes in Ukraine would help establish conditions for enhanced economic and trade relations with the 27-nation bloc, leading to Ukraine’s further gradual economic integration into the EU market.

“I want us to remain ambitious in our relationship,” von der Leyen tweeted. “The EU and Ukraine share a deep and special bond.”

Pressed about prospects of Ukraine’s eventual EU membership at a news conference after the talks, von der Leyen responded that “we are one European family and we work together.”

The Ukrainian leader lamented the EU’s refusal to set a clear timeline for the country’s membership in the bloc in remarks that reflected Kyiv’s frustration.

“We are walking one path, but where is the finish line?” Zelenskyy said. “And is there any? Every Ukrainian wants to hear that signal.”

On Tuesday, Ukraine and EU signed a deal intended to facilitate air travel, which Michel said “opens market to low cost airlines and offers many more opportunities for exchanges and visits.”

The EU leaders also reiterated their “unwavering support and commitment to Ukraine’s independence, sovereignty and territorial integrity within its internationally recognized borders.”

Along with the U.S., the EU has provided political and economic support to Ukraine, which has been locked in a tug-of-war with Moscow following Russia’s 2014 annexation of Ukraine’s Crimean Peninsula and its support for a separatist insurgency in eastern Ukraine.

Zelenskyy on Tuesday called on the EU to ramp up its sanctions on Russia.

He also reaffirmed his country’s strong opposition to a new Russian natural gas pipeline that goes directly to Germany under the Baltic Sea, bypassing its territory. Kyiv fears that the Nord Stream 2 pipeline will deprive the country of $2 billion in annual gas transit fees and erode its international standing.

“Gas supply security would include a reverse flow if necessary from the European Union, for example, Slovakia, which is willing to step up,” von der Leyen said. “Overall, what we are working on together ... is independence. Energy independence is vital for Ukraine and for the European Union.”