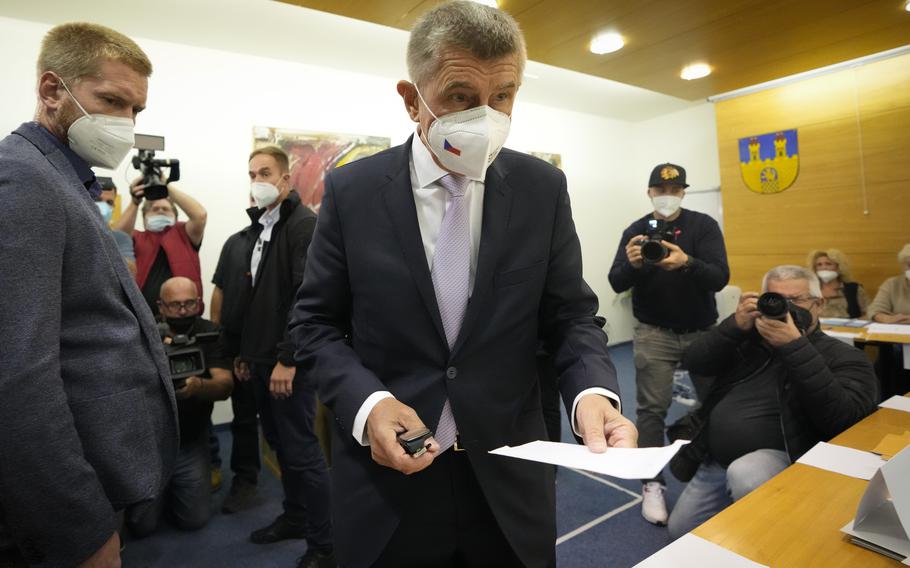 The two-day election to fill 200 seats in the lower house of the Czech Republic's parliament took place shortly after the International Consortium of Investigative Journalists reported details of Babis' overseas financial dealings in a project dubbed the "Pandora Papers." Babis, 67, has denied wrongdoing.

After votes from almost 30% of the country's 14,900 ballot stations were counted Saturday by the Czech Statistics Office, ANO has received 30.1% of the vote. It won big with 29.6% four years ago.

ANO was followed by two coalitions that were created by five parties — one group on the right and one on the left — in an effort to oust the populist prime minister from power.

The center-right Together coalition was capturing 23.9% of the votes while the center-left coalition of the Pirate Party and STAN, a group of mayors and independent candidates, were coming in third with 13.5% support.

The anti-migrant, anti-Muslim force in the Czech Republic, the Freedom and Direct Democracy party, appeared to be in fourth place with 10.9% support while the leftist Social Democrats, who were part of Babis' previous coalition government, were the only other party to win parliamentary seats with 5.1% support.

Final results will be known later Saturday. It's expected that the euroskeptic Babis will seek to form a new coalition government in the Eastern European country, which is a member of both the European Union and NATO.

In the Pandora Papers investigation, the consortium alleged that the Babis put over $20 million into shell companies to buy 16 properties in France. The Pandora Papers presented details of how many of the world's richest and most powerful people allegedly hide their wealth from tax collectors.

Prior to the vote, the euroskeptic Babis led a minority coalition government of ANO and the Social Democrats in the Eastern European country, which is a member of both the European Union and NATO. He has also governed with the support of the maverick Communists.

During his aggressive campaign, Babis portrayed migration as a threat even though his country is not a typical destination for asylum-seekers and refugees. He also condemned the 27-member EU's plan to tackle climate change.

He hasn't ruled out forming a coalition with Freedom and Direct Democracy, a party that wants to lead the Czech Republic out of the EU and to hold a referendum on its NATO membership.