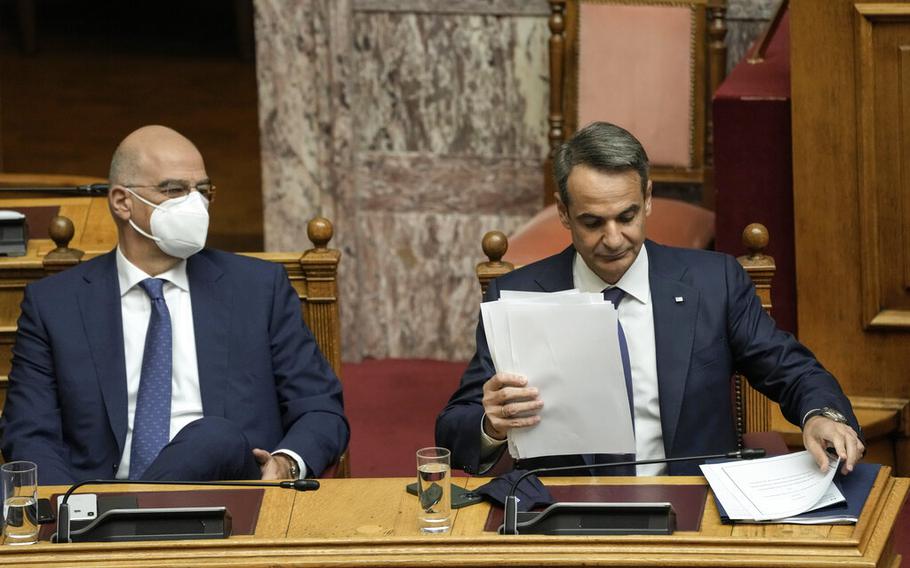 ATHENS, Greece — Greece’s lawmakers Thursday ratified a landmark defense deal with France that includes a mutual assistance clause in case of an armed attack against either — a pact that has irked fellow NATO member Turkey.

The five-year agreement was announced in Paris last week by Prime Minister Kyriakos Mitsotakis and French President Emmanuel Macron. Greece also announced plans to buy three French frigates, a deal due to be finalized by the end of the year.

“For the first time, an explicit and unequivocal military assistance clause is provided in the case of a third party attack on one of the two states,” Mitsotakis told lawmakers. “We all know ... who is threatening whom with a casus belli (a cause for war) in the eastern Mediterranean.”

The agreement was opposed by the main left-wing opposition party Syriza, which argued that it imposes too many concessions on Athens including the risk of involvement in France’s overseas military operations.

Greece is pinning much of its defense strategy on close military cooperation with France and the United States as it remains locked in a volatile dispute with neighbor Turkey over sea and airspace boundaries.

Athens is currently concluding negotiations with the U.S. to extend and possibly increase the scale of a Mutual Defense Cooperation Agreement that allows U.S. troops access to Greek military bases.

Turkey says it has been unfairly excluded from sea and seabed mineral access in the eastern Mediterranean in a dispute that triggered a tense naval standoff with Greece last year and renewed tension in recent weeks.

Over the weekend, a spokesperson for the Turkish Defense Ministry described Greece’s actions as “unlawful, provocative and aggressive.”

In response to the tension, Greece’s government announced last year it would be overhauling its military, including the hiring of personnel and a major military procurement program that has already seen the country buying 18 French Rafale fighter jets.

The defense deal with France includes a mutual assistance clause, which states that the two sides will come to each other’s aid “with all appropriate means at their disposal, and if necessary with the use of armed force if they jointly ascertain that an armed attack is taking place against the territory of one of the two.”

The idea of collective defense is a principal tenet of NATO, of which both Greece and France are members, as is Turkey. Article 5 of the alliance’s treaty stipulates that an attack on one member nation is considered an attack on all.

“Does Article 5 apply in the case of an attack by a NATO member? I’m not sure NATO has ever been very clear on that issue,” Mitsotakis had said when asked during the conference why Greece needed an extra alliance agreement. “My obligation is to defend my country and to form the necessary alliances over and above the security arrangements that we already have.”

On Tuesday, NATO Secretary-General Jens Stoltenberg appeared to be critical of European defense initiatives that aren’t within NATO.

“What I don’t believe in is efforts to try to do something outside the NATO framework or compete with or duplicate NATO, because NATO remains the cornerstone, the bedrock for European security, and also actually for North American security,” Stoltenberg said in a speech without directly mentioning the defense deal between Greece and France.