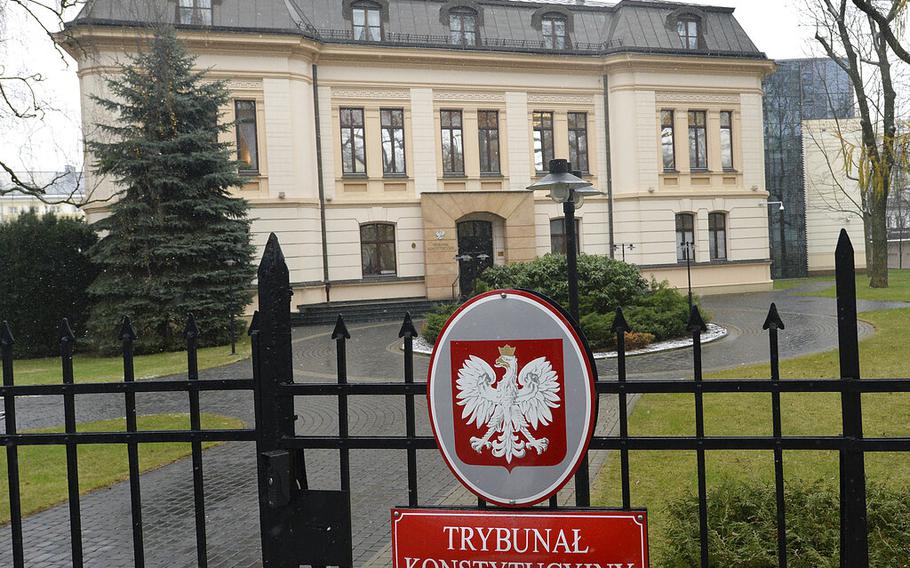 FILE - In this Wednesday, Dec. 20, 2017 file photo, Poland’s Constitutional Tribunal is seen in Warsaw, Poland. Poland’s constitutional court is to rule Thursday, Oct. 7, 2021 in a key case over whether Polish or European Union law has primacy in the EU member country. The ruling by the Constitutional Tribunal is expected to define the future of Poland’s already troubled relationship with the 27-member bloc in the key area of law and justice. (Czarek Sokolowski/AP)

WARSAW, Poland — Poland's constitutional court ruled Thursday that Polish laws have supremacy over those of the European Union in areas where they clash, a decision likely to embolden the country's right-wing government and worsen its already troubled relationship with the EU.

The Constitutional Tribunal held that some provisions of the treaties binding EU members and some rulings by the 27-nation bloc's highest court conflict with Poland's Constitution. Two of the 14 judges who considered the case dissented from the majority opinion.

The tribunal initiated its review of law supremacy in July on a motion from Polish Prime Minister Mateusz Morawiecki. He asked for the review after the European Court of Justice ruled in March that Poland’s new regulations for appointing judges to the Supreme Court could violate EU law, which takes precedence. The ruling obliged Poland’s right-wing government that had introduced the regulations — which gave politicians influence over judicial appointments — to discontinue them and to observe the independence of justice.

The tribunal majority said Thursday that Poland's EU membership since 2004 did not give the European court supreme legal authority and did not mean that Poland had shifted its law sovereignty to the EU. They said no state authority in Poland would consent to an outside limitation of its powers.

The opinion drew a strong response from EU institutions and officials. The bloc's executive arm, the European Commission, issued a statement flatly contradicting the holding of the Polish court.

“EU law has primacy over national law, including constitutional provisions,” the statement said. “All rulings by the European Court of Justice are binding on all member states’ authorities, including national courts...The (EU) Commission will not hesitate to make use of its powers under the treaties to safeguard the uniform application and integrity of Union law.”

European Parliament member Terry Reintke, the shadow rapporteur on Poland for the legislature's Greens-European Free Alliance group, said the ruling “flies in the face of what the Polish government has signed up to as a member of the European Union.”

“Fellow EU governments must no longer stand by and do nothing as the Polish government attempts to rewrite the rules of democracy to suit their own interests," Reintke said.

European Parliament member Jeroen Lenaers said the decision and other recent actions in Poland make it hard to believe the Polish government doesn't want to lead the country out of the EU.

"The Polish government has lost its credibility. This is an attack on the EU as a whole,” said Lenaers, the European People’s Party spokesman for justice and home affairs.

A group of protesters with banners reading “We are Europeans” gathered before the constitutional court in Warsaw shortly after the verdict. Around 80% of people in Poland support the country’s EU membership.

Since the Law and Justice party came to power in Poland in 2015, it has taken steps to control the justice system and the judiciary, including placing loyalists on a judicial appointments body, forcing the retirement of some Supreme Court justices and establishing a legal chamber with the authority to discipline judges and prosecutors. The EU court ruled the disciplinary chamber was illegal and ordered it closed, which has not happened.

Poland’s policies in the area of law and the judiciary have created conflicts with the European Commission, including a lack of decision over the payment of billions of euros to the country from the EU pandemic recovery fund.

Government spokesman Piotr Mueller said Thursday's ruling had no effect on areas of EU treaties such as competition, trade, consumer protection, and the exchange of services and goods. He reiterated the government’s assertion that top courts in Germany, France, Spain and other EU nations also have upheld the primacy of national laws.

The ruling followed months of court proceedings in which representatives of Poland's government, president and parliament argued that Poland’s Constitution comes before EU law and that rulings by the European Court of Justice sometimes conflict with Poland’s legal order.

Representatives of the country's human rights commissioner argued Thursday before the decision was issued that Poland agreed to respect the EU legal order when it joined the bloc in 2004. They said questioning that order would lower the legal protection standards for people in Poland.

“It’s a confederation of anti-democratic forces against Poland’s membership in the European Union,” Michal Wawrykiewicz, a pro-EU lawyer who is critical of the government, tweeted. He called it a “black day” in Poland’s history.

Poland’s government insists that the justice system and the judiciary are the sole purview of EU member nations and not the EU, and has ignored a number of the EU court’s rulings.

But a deputy foreign minister, Pawel Jablonski, insisted that a ruling giving primacy to Poland’s Constitution would not go against the EU membership treaties. He said that it would instead give them a new definition in a situation where, he said, top courts in many member countries have not followed European Court of Justice's rulings

The European Parliament adopted a resolution last month calling on Morawiecki to cancel the case, stressing the “fundamental nature of primacy of EU law as a cornerstone principle of EU law.”

The Constitutional Tribunal itself is seen by the EU as illegitimate due to the political influence of Poland’s governing party on the appointment of some of its judges. Many of them are government loyalists — including the court’s president, Judge Julia Przylebska.

One of the two dissenting judges, Piotr Pszczolkowski, said in court Thursday that the tribunal had no authority to rule in the case and that no true conflict exists between EU treaties and Poland's Constitution. He also argued that EU treaties are the foundation of the bloc.

In Thursday's ruling, the tribunal said that the constitution is the supreme law in Poland and every international agreement or treaty, being lower in rank, must be in accordance with it.