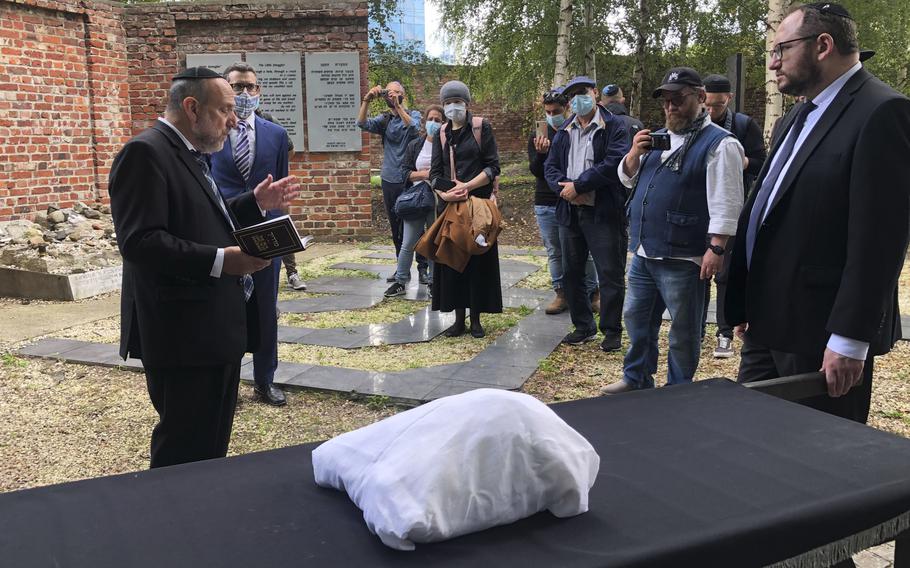 Warsaw's Jewish community held a funeral for an unidentified Holocaust victim after human remains were recently discovered in an area that belonged to the Warsaw Ghetto during World War II, in Warsaw, Poland, Tuesday Sept. 14, 2021. (Vanessa Gera/AP)

WARSAW, Poland — Warsaw's Jewish community buried an unidentified Holocaust victim on Tuesday whose remains were discovered this summer in a building that was within the Warsaw Ghetto during World War II.

"We are here as the family for a person we don't know," Poland's chief rabbi, Michael Schudrich, said as the bones, wrapped in white cloth, lay on a wooden cart and community members gathered together.

Four men pulled the cart to the grave, where the bones were buried with soil from Israel, and Jewish leaders recited Kaddish, the Jewish prayer for the dead.

The ceremony took place in Warsaw's Jewish Cemetery, one of the largest Jewish cemeteries in Europe in a city that was a leading center of Jewish life until the Holocaust.

Leslaw Piszewski, chairman of the Jewish Community in Warsaw, said the burial was a very emotional event for him, all the more so coming on the eve of Yom Kippur, one of the most sacred days in the Jewish calendar.

"After nearly 80 years this unknown person got his dignity back," Piszewski said. "This is very important. This is the only thing that we can do for the unknown victim."

The remains were discovered due to a water break in a building in Muranow, a Warsaw district that was largely Jewish before the war and was the site of the Warsaw Ghetto during the German wartime occupation of Poland.

Marek Slusarz, a man who lives and runs a community nonprofit foundation in the building, discovered the human bones when he was searching in the basement for the source of a water break. When he and a plumber found them, he alerted police and the Jewish community.

It is believed that the remains belonged to a Jew who was in hiding when the German forces crushed the Warsaw Ghetto Uprising of 1943 by razing the area to the ground.

The area was rebuilt after the war on top of the wartime rubble.

Slusarz said that despite the tragedy, it was a source of satisfaction for him to have a role in the victim receiving a dignified burial. Not Jewish himself, he said he hoped such events would inspire younger generations in Poland to preserve the memory of the centuries of Jewish and non-Jewish co-existence in Poland.

A representative from the Israeli Embassy laid a wreath and Wojciech Kolarski, secretary of state in the office of President Andrzej Duda, also paid his respects at the funeral.