Police clash with opponents of Serbian church in Montenegro 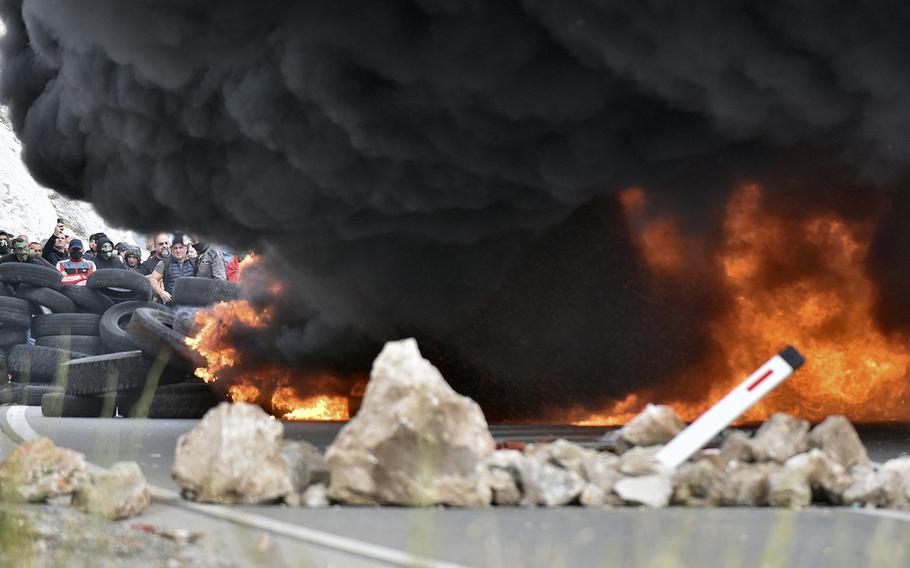 Smoke rises from burning tires which protesters set fire at one of the blockades near Cetinje, Montenegro, Sunday, Sept. 5, 2021. (Risto Bozovic/AP)

CETINJE, Montenegro — Arriving in a military helicopter, the head of the Serbian Orthodox Church in Montenegro was inaugurated in the state's old capital on Sunday amid clashes between police and protesters who oppose continued Serb influence in the tiny Balkan nation.

Hospital officials in the city of Cetinje said at least 60 people were injured, including 30 police officers, in clashes that saw police launch tear gas against the demonstrators, who hurled rocks and bottles at them and fired gunshots into the air. At least 15 people were arrested.

Evading road blockades set up by the demonstrators, the new head of the Serbian church in Montenegro, Metropolitan Joanikije, arrived in Cetinje by a helicopter along with the Serbian Patriarch Porfirije. TV footage showed the priests being led into the Cetinje monastery by heavily armed riot police holding a bulletproof blanket to shield their bodies.

Patriarch Porfirije later wrote on Instagram that he was happy that the inauguration was held, but added that he was "horrified by the fact" that someone near the monastery wanted to prevent the ceremony "with a sniper rifle." The claim could not be immediately independently verified.

The demonstrators set up barriers with trash bins, tires and large rocks to try to prevent church and state dignitaries from coming to the inauguration. Chanting "This is Not Serbia!" and "This is Montenegro!," many of the protesters spent the night at the barriers amid reports that police were sending reinforcements to break through the blockade. Tires at one blockade were set on fire.

Montenegrins remain deeply divided over their country's ties with neighboring Serbia and the Serbian Orthodox Church, which is the nation's dominant religious institution. Around 30% of Montenegro's 620,000 people consider themselves Serb.

Metropolitan Joanikije said after the ceremony that "the divisions have been artificially created and we have done all in our power to help remove them, but that will take a lot of time."

In a clear demonstration of the sharp political divide in Montenegro, President Milo Djukanovic, the architect of the state's independence from Serbia, visited Cetinje while the current pro-Serb Prime Minister Zdravko Krivokapic went to Podgorica to welcome the Serbian patriarch.

While Krivokapic branded the protests as "an attempted terrorist act," Djukanovic said the protesters in Cetinje were guarding national interests against the alleged bid by the much larger Serbia to impose its influence in Montenegro through the church.

Djukanovic accused the current Montenegrin government of "ruthlessly serving imperial interests of (Serbia) and the Serbian Orthodox Church, which is a striking fist of Serbian nationalism, all against Montenegro."

Montenegro's previous authorities led the country to independence from Serbia and defied Russia to join NATO in 2017. Montenegro also is seeking to become a European Union member.

In Serbia, President Aleksandar Vucic, who has been accused by the opposition in Montenegro of meddling in its internal affairs in conjunction with Russia, congratulated Joanikije on his inauguration and praised the government for going ahead with the ceremony despite the clashes.

"Cetinje is a town where some 90% of the people are against the Serbian Orthodox Church, where there is hate towards everyone who is not Montenegrin," Vucic said in Belgrade. "This is not a real hate, its hate that is induced by certain politicians in Montenegro, so it was quite logical to expect what happened there."

The U.S. government urged all sides "to urgently de-escalate the situation."

"Religious freedom and the freedom of expression, including to peacefully assemble, must be respected," the U.S. Embassy said.