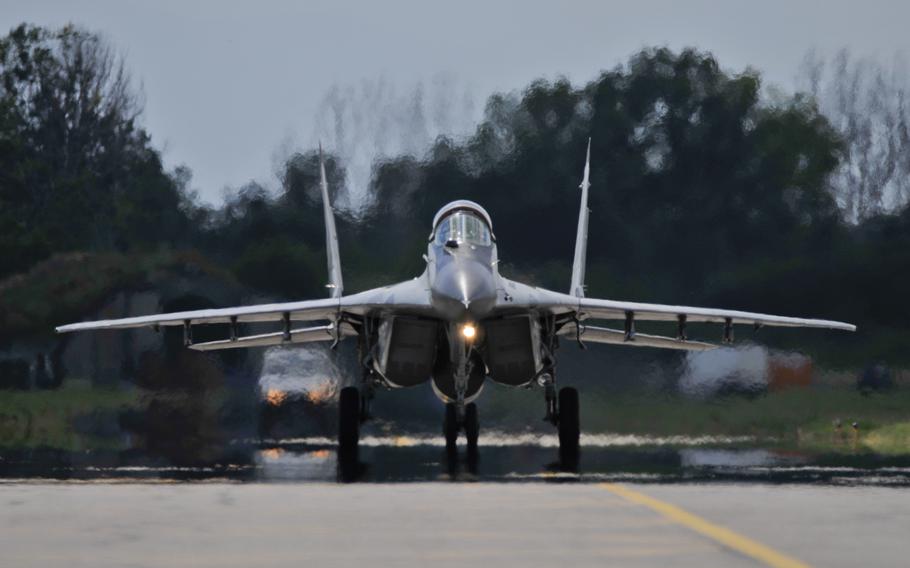 A Bulgarian air force MiG-29 Fulcrum taxis back to the ramp at Graf Ignatievo Air Base, Bulgaria, on July 15, 2015. (Andrew Moseley/U.S. Air Force)

SOFIA, Bulgaria — A Soviet-built MiG-29 fighter jet from Bulgaria's air force crashed into the Black Sea during a military exercise and the pilot is missing, the Bulgarian Defense Ministry said Wednesday.

The ministry said the fighter jet disappeared from radar at 12:45 a.m. local time over the country's territorial waters. It said a search and rescue operation was launched immediately and is continuing, but the pilot's status remains unknown.

The reasons for the crash are unclear, but military officials suspended the Shabla 2021 drill.

Since joining NATO in 2004, Bulgaria has sought to replace its air fleet of Soviet-made Mig-29 jets, but financial problems have caused repeated delays.

The Balkan country signed a deal in 2019 to buy eight F-16 military jets from U.S.-based firm Lockheed Martin as part of efforts to bring its air force in line with NATO standards. The first of the F-16's are scheduled to be delivered to Bulgaria by 2023.