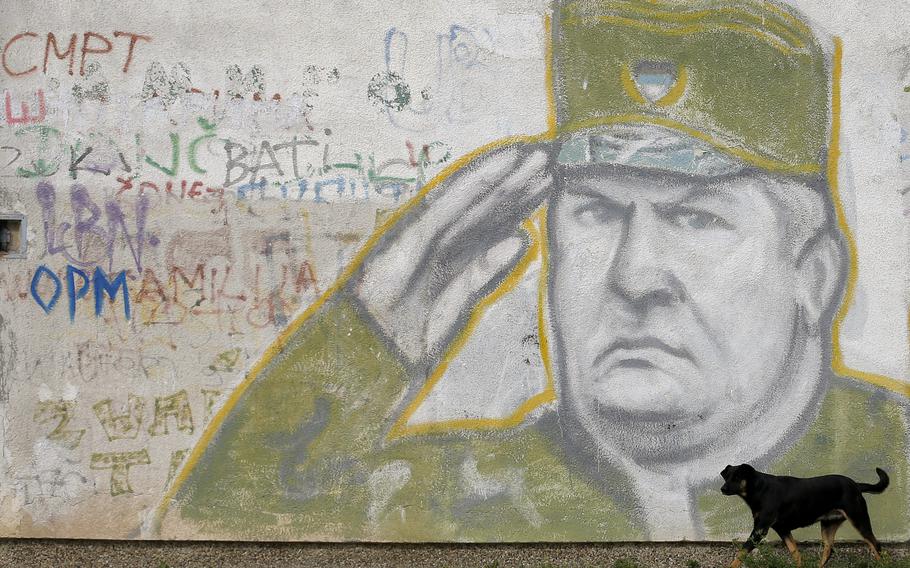 A dog walks past a mural depicting former Bosnian Serb Gen. Ratko Mladic decorating a the wall of an apartment building in Belgrade, Serbia, on Nov. 7, 2017. U.N. judges on Tuesday, June 8, 2021, are set to deliver their final ruling on the conviction of former Bosnian Serb army chief Radko Mladic on charges of genocide, war crimes and crimes against humanity during Bosnia’s 1992-95 ethnic carnage. (Darko Vojinovic/AP)

Grabovica's 11-year-old daughter, Irma, was among the 10,000 civilians killed in the relentless shelling and sniping that Serb troops under Mladic inflicted on the Bosnian capital of Sarajevo.

But an apology is unlikely from the general known as the "Butcher of Bosnia" for his ruthless campaigns of mass murder and expulsion.

Nearly three decades after Europe's worst conflict since World War II, a U.N. war crimes court in The Hague, Netherlands, is set on Tuesday to close the case against Mladic, the most notorious figure in the 1992-1995 war that killed more than 100,000 people and left millions homeless.

"If only he would admit that he made a mistake, that he was wrong," said Grabovica. "But that won't happen."

The tribunal sentenced Mladic in 2017 to life imprisonment, after convicting him of masterminding crimes throughout the 1992-95 Bosnian War, including genocide in the eastern enclave of Srebrenica in 1995, where his forces murdered more than 8,000 Muslim Bosnian men and boys.

Mladic appealed, but the case has been repeatedly delayed by his ill health and, more recently, by the COVID-19 pandemic.

Many hope the final ruling will bring closure for the victims' families and drive home the message that there is no impunity for war crimes.

Sofia Stolk, a researcher at the T.M.C. Asser Institute in The Hague, said the final verdict is important because it closes the tribunal's last key case and because it concerns genocide, the deliberate killing of people from a particular nation or ethnic group with the aim of its destruction.

Stolk said the reaction in the Balkans to this and other war crimes trials is predictably mixed.

"It's both received as having an impact on transitional justice and to contribute to justice for the victims of the crimes committed there and … it's also been regarded as a political trial ... mastered by the West," Stolk said.

Diametrically opposing views over Mladic's wartime legacy reflect deep ethnic divisions that still exist in Bosnia so many years after the war ended with a U.S.-brokered peace agreement. For Bosniaks, mostly Muslim, he is a villain and war criminal. Bosnian Serbs, however, still worship their wartime commander as a martyr and hero.

"I cannot accept any verdict," said Serb war veteran Milije Radovic from the eastern Bosnian town of Foca. "For me, he is an icon. And for the Serb people, he is an icon."

"Nobody can convict him of anything, especially not The Hague tribunal," Radovic said. "He is one of us. He is the victim of an international conspiracy by mafioso politicians. He is our man, a man from here, who respected the rules of war."

Posters, monuments and painted images of Mladic can be seen in the Serb-dominated half of Bosnia called Republika Srpska, where many believe Mladic's conviction is the result of fabrication and Western support for rival Bosniaks and Croats.

While charged with war crimes in 1995 by the Yugoslav war crimes court, Mladic went into hiding and evaded justice until 2011, when he was caught and handed over to The Hague from neighboring Serbia by its then-ruling pro-Western government. 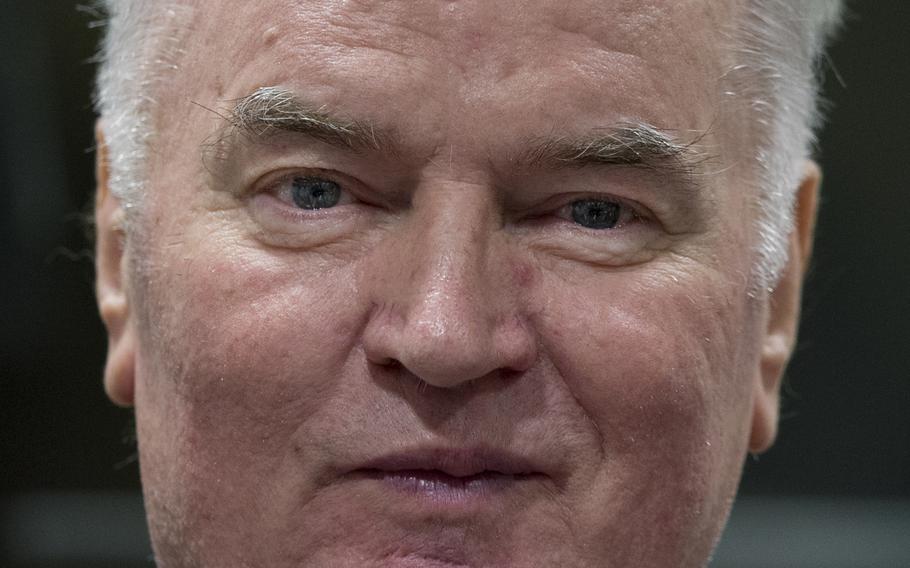 Ahead of the final verdict, Mladic's lawyers have sought acquittal on charges that included orchestrating Europe's only post-WWII genocide in Srebrenica, and involvement in numerous other atrocities, including the siege of Sarajevo.

On the other hand, prosecutors weren't content that Mladic was convicted for genocide only in Srebrenica and not also in other areas where Bosnian Serb forces under his command tortured, imprisoned, killed and expelled non-Serbs.

One such location is Prijedor in northwest Bosnia, where residents last week commemorated over 100 children killed by Bosnian Serbs. At the time, Bosniaks and Croats were rounded up and forced to wear white ribbons before being sent to prison camps — scenes that reminded many of Nazi crimes.

Mladic's son, Darko Mladic, insisted in an interview with The Associated Press that his father is innocent and that his rights have been violated during the trial. The only legally appropriate decision would be to annul the initial conviction, he said.

"If the law is to be respected, he should be set free to return home," Darko Mladic said. "I never doubted him because I know him so well, I know his character."

Now 79 and in frail health, Mladic was known as a ruthless and fiery commander during the war, who personally led the Bosnian Serbs as they took control over large swaths of Bosnia to create a separate mini-state. Mladic remained defiant during the trial, lashing out at the tribunal as an anti-Serb instrument.

Standing by a monument for the 1601 children who died in the siege of Sarajevo, Grabovica said he could not understand such brutality.

"That he would act like that, issue orders to kill innocent children who had just come into this world, who just started to dream their dreams," he said. "My little girl was killed like that, who was only 11 and who could not have been guilty of anything,"

In Srebrenica, thousands of white tombstones in Islamic tradition mark the graves of the massacre victims. who were rounded up by Mladic's troops when they seized the enclave that was under U.N. protection at the time. Their remains are still being excavated from dozens of mass graves.

"If he could come here now to see these gravestones, everything would be clear to him," said Djulija Jusic, who lost her two sons and 33 other relatives in the massacre.

"He should spend the rest of his life in prison. I don't wish to do him any harm myself. All I wish is that God may let him see the grave of his son as I am watching the graves of my two sons," she said.

Jovana Gec and Dusan Stojanovic in Belgrade, Serbia, Aleksandar Furtula in The Hague, Netherlands, and Sabina Niksic in Sarajevo, Bosnia, contributed to this story.