173rd troops injured in training jump are released after treatment 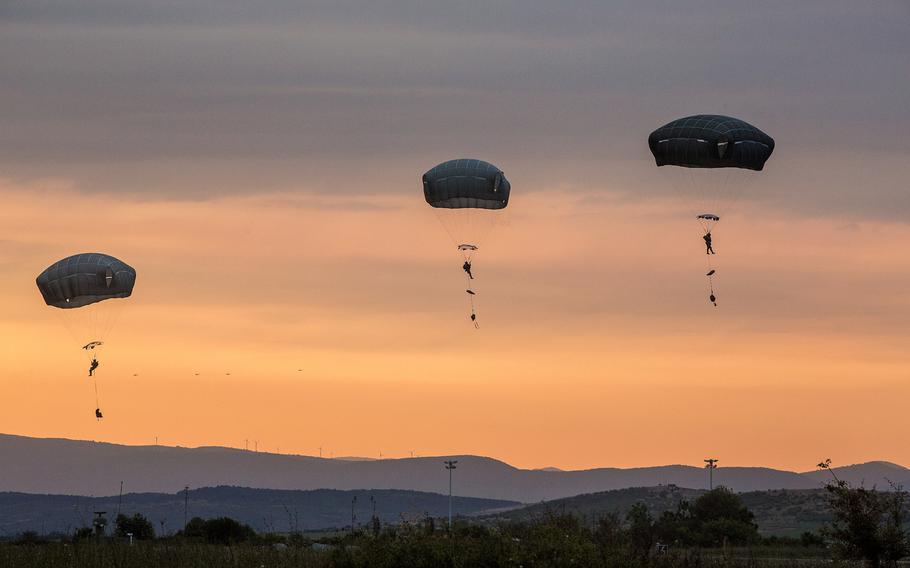 Soldiers of the 173rd Airborne Brigade, descends on Bezmer Airbase, Bulgaria, after jumping out of a C-17 aircraft during exercise Saber Guardian 17, on Tuesday, July 18, 2017. Eleven 173rd paratroopers were injured during a nighttime training jump near Turzii on Saturday. Jada Owens/U.S. Army (Jada Owens/U.S. Army)

A 12th soldier injured during the Friday night jump was set to be released Monday and will return to the unit’s home station in Vicenza, Italy, USAREUR said.

“He is expected to recover fully from his injury,” Don Wrenn, a USAREUR spokesman, said in a statement.

More than 570 U.S. and allied troops participated in the airborne operation near Campia Turzii, Romania.

During the jump, a part of exercise Saber Guardian 17, the paratroopers conducted an operation to seize an airfield under cover of darkness while carrying a full combat load.

“While night jumps are routine, there is always an increased level of risk associated with limited visibility and greater carrying weight,” Wrenn said.

About 25,000 troops are taking part in Saber Guardian, USAREUR’s largest exercise of the year, in Romania, Bulgaria and Hungary.