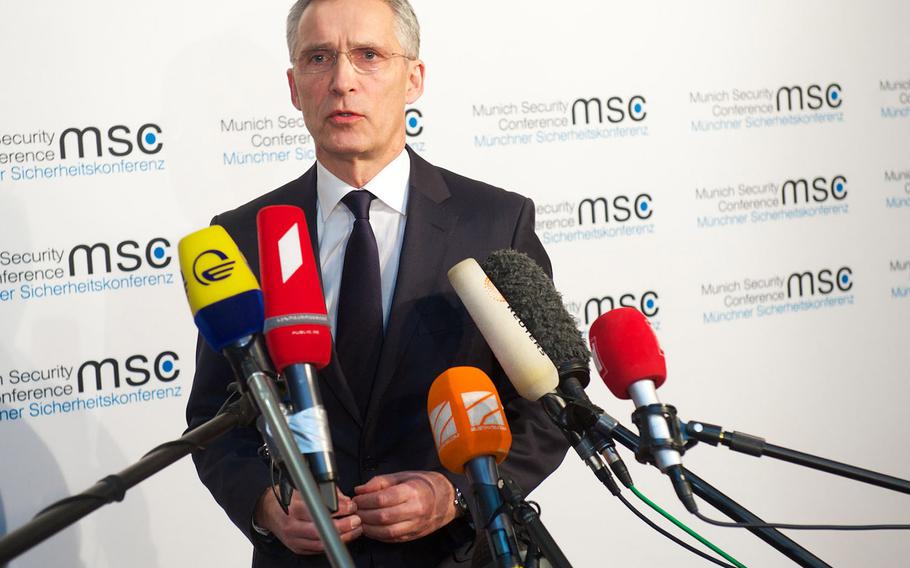 “We want to remain trans-Atlantic, but we also want to be more European,” Defense Minister Ursula von der Leyen said inside a Munich convention hall filled with leaders such as Defense Secretary Jim Mattis.

“We intend to work on an army of Europeans,” von der Leyen said, apparently referring to a plan adopted by the European Union in December establishing a defense and security network including 25 of the bloc’s 28 members. According to the EU, the nascent defense pact will provide for greater cooperation among member states through joint projects aimed at boosting the union’s military capabilities.

Over three days, scores of military leaders, heads of state and diplomats are meeting at the annual Munich Security Conference. Mattis and National Security Adviser H. R. McMaster are leading the U.S. delegation.

The gathering is happening at a time of widespread global tension: North Korea, Syria and a more aggressive Russia are matters under discussion.

“The world has moved closer, much too close, to a brink of major interstate war,” said Wolfgang Ischinger, chairman of the Munich Security Conference.

Yet unease over Europe’s relationship with the U.S. was apparent at the start of talks.

Von der Leyen took subtle jabs at a shift in U.S. policy under President Donald Trump, who has emphasized U.S. military power in his approach to foreign affairs, but has blasted institutions such as the United Nations.

“Germany wants to strengthen the United Nations,” she said.

“Our American friends too have a precious obligation that goes beyond military matters alone,” she said.

At the same time, von der Leyen acknowledged that Germany continues to fall short on defense spending, which has been a source of tension with the U.S. for years and has intensified under Trump.

In Europe, Washington’s NATO allies say they remain committed to the alliance, but they also are championing the effort — known as Permanent Structured cooperation, or PESCO — to bolster EU defense initiatives. NATO has warned those efforts shouldn’t duplicate the alliance’s efforts or give the impression that Europe can do without the U.S. and its non-EU members.

“I welcome EU efforts on defense, but with opportunity comes risk,” NATO Secretary Jens Stoltenberg said in Munich. “The reality is the European Union cannot protect Europe by itself.

But with the impending departure from the EU of Britain — which blocked most non-NATO defense initiatives within the trading bloc — Europe’s focus on its own security has been deepening.

“We want to revive the European idea,” said French Defense Minister Florence Parly. “Europe is not a luxury, Europe is a necessity.”

Obstacles abound, however, as Europe attempts to chart a more independent course. Most major NATO militaries, while upping spending in the past two years, are still struggling to boost defense expenditures at significant rates.

There is a tendency to shy away from tough decisions on the world stage, von der Leyen said.

“When it comes to making controversial decisions, we are always hampered by the need for unanimity,” von der Leyen said.

But Europe is drawing closer out of necessity, Ischinger noted.

“There is a renewed determination in the German-French partnership, and also a new sense of urgency.”