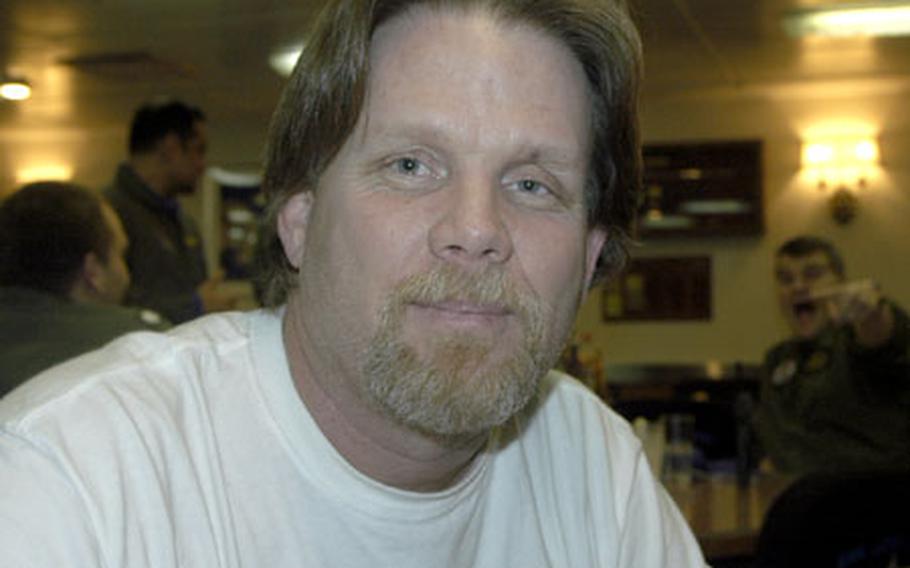 OK, on a carrier there&#8217;s so much else going on, people mainly get wrapped up in flight operations and stories of war from the sea. What do you do? I&#8217;ve got the greatest job out here. It&#8217;s my job to bring fun to the ship, to bring morale to the ship. It&#8217;s important that these guys and girls have an outlet, something entertaining to keep them motivated.

How long have you been doing it? I&#8217;ve been at it for 6 years. I was on the [aircraft carrier USS] Carl Vinson prior to coming here.

What kind of entertainment is provided for the 5,000 or so sailors and Marines on board? We try to provide a little something for everyone. We&#8217;ve got DVD movies, Xbox games &#8212; well, those are the most popular. We&#8217;ve got books for them to read. Sometimes, we transform the hangar bay into a full-court basketball court. Sometimes, I try to think of something off the wall. Once, [I] hosted a macaroni and cheese sculpting contest, and the other day we had a dodge ball game. The XO (executive officer) was a pretty popular target.

I&#8217;m sorry, could you back up a second? A macaroni and cheese sculpting contest? I try to shake things up. Be creative. Catch people off guard. It makes things more interesting for them. At first, people had the same reaction. A what!? But they really got into it. It turned out to be real fun and real competitive. It threw everyone off, but they ended up having a really good time. We&#8217;ve also had a contest called &#8220;pimp my office,&#8221; (based on the MTV show &#8220;Pimp My Ride&#8221; in which programmers overhaul someone&#8217;s beat up vehicle). We send out teams who redo someone&#8217;s office, within reason. They can&#8217;t be vulgar or anything, and the most creative wins a prize.

Know someone whose accomplishments, talents, job, hobby, volunteer work, awards or good deeds qualify them for 15 minutes of fame? How about someone whose claim to glory is a bit out of the ordinary &#8212; even, dare we say, oddball? Send the person&#8217;s name and contact information to:news@mail.estripes.osd.mil