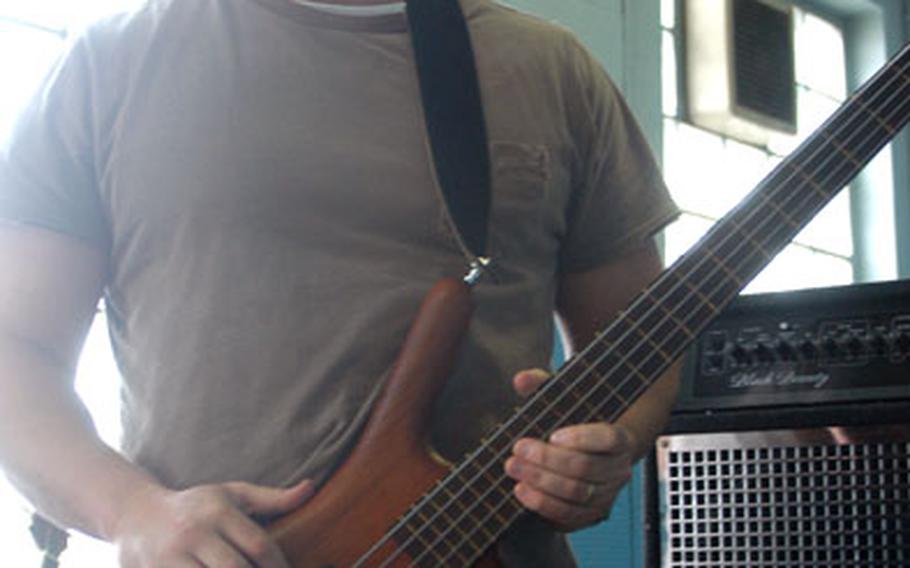 Describe your band&#8217;s music.We go from Black Sabbath to Ted Nugent to Rage Against the Machine. Stone Temple Pilots and Nirvana. We even throw some Beatles in there.

What is your favorite style of music? Metal. I&#8217;m kind of a metalhead. Stone Sour, Slipknot, Trivium. Trivium is coming here pretty soon, by the way. I have tickets (at LKA Longhorn in Stuttgart). I just went to the Stone Sour show there on Monday.

How was it? It was amazing. We were right up there, right in the middle of the whole mess. It was such a good show.

How long have you been together? Since October of &#8216;05. Everything clicked pretty good. We started playing some shows here and there, basically fundraisers. After a while, we started getting offers to get paid to play. It&#8217;s not a whole lot of money when you divvy it up between four people, sometimes five because we took on a DJ as well. He (runs) our sound while we&#8217;re playing, so in case there&#8217;s some feedback he&#8217;ll find it and eliminate it. Between sets he&#8217;ll play dance music. It&#8217;s kind of like non-stop entertainment.

You play bass. Any influences? Dirk Lance (formerly of Incubus). He was not overly complex but did a lot of really good bass lines, and their music at the time was really bass-driven. It was a good challenge for me when I was learning how to play the bass, because I would watch videos of Incubus playing and try to figure out how he was doing what he was doing.

Do you play with pick or not? Some songs I play with a pick but most of the time I use my fingers. After our O&#8217;Donovan&#8217;s show [in Boeblingen] you can see where my skin broke on the end of my finger. My fingers get all shredded up, but it&#8217;s all in good fun.

Do you have groupies? Define groupie.

Females who follow the band because they&#8217;re interested in its male members. Well, our wives are definitely our biggest groupies. We had a girl throw her bra up at us, but she was the wife of one of my friends. She was like, &#8220;Woo-hoo!&#8221; That sort of counts.

Do you have a Web site?www.myspace.com/onebrickshy

Know someone whose accomplishments, talents, job, hobby, volunteer work, awards or good deeds qualify them for 15 minutes of fame? How about someone whose claim to glory is a bit out of the ordinary &#8212; even, dare we say, oddball? Send the person&#8217;s name and contact information to: news@mail.estripes.osd.mil