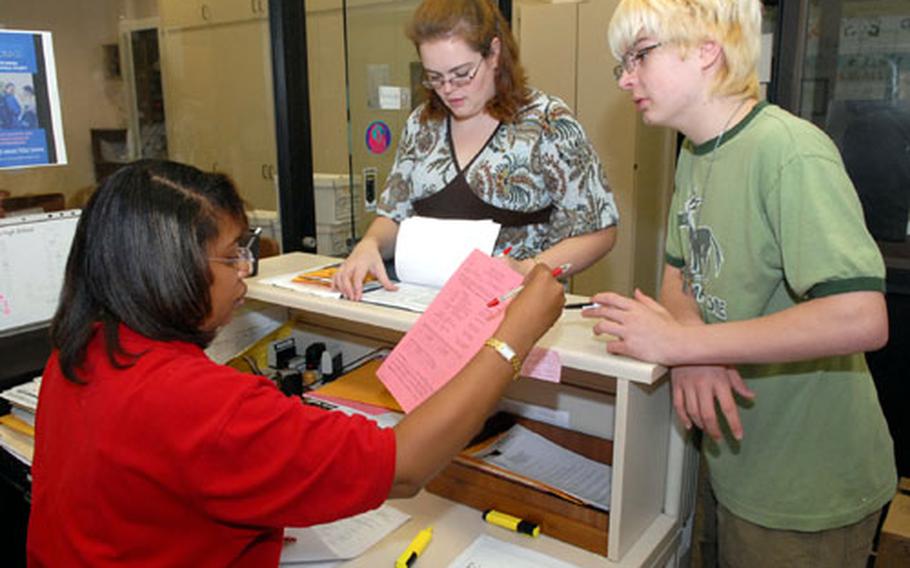 In an attempt to make the first few days of the school year less chaotic, DODDS-Europe officials are urging parents to get their children registered as soon as possible.

Sue Gurley, chief of staff for Department of Defense Dependents Schools-Europe, said Tuesday that thousands of parents haven&#8217;t signed up their children for the 2008-09 school year, which starts Aug. 25 across most of Europe. Schools in Belgium and the Netherlands begin a week earlier.

DODDS relies on enrollment figures to determine how many teachers it needs for each school and each grade in a particular school.

"Some of our schools are under their projected enrollments and we&#8217;re not sure if that&#8217;s because people have moved or parents haven&#8217;t registered yet," Gurley said.

Accurate counts are needed "so we can ensure our resources are there for the first day of school," she said.

Late enrollments can cause class sizes at schools to at least temporarily climb above student-to-teacher ratios that the system maintains, Gurley said. DODDS guidelines call for one teacher for every 18 students in the first three grades and for every 25 students in the next three.

Over-populated classrooms also might not have enough supplies initially for all the students.

"I cannot overemphasize the importance of registering or re-registering students as soon as possible," said Diana Ohman, DODDS-Europe director. "The importance of doing so is that class assignments, teacher hires and classroom supply allocations are based on student enrollment figures."

Parents can register their children online at www.eu.dodea.edu or in person at school.

Schools are open during normal business hours. Laurel Eisinger, deputy of DODDS-Europe education division, said offices should be open from 8 a.m. to 3 p.m. on weekdays and many will have longer hours than that.

The Department of Defense Education Activity requires immunizations under guidelines issued by the Centers for Disease Control and Prevention and posts them on its Web site at www.dodea.edu, Eisinger said. Students will need to get required shots at their local military clinic. Some clinics might require appointments.

DODDS will allow students a 10-day grace period between registering and getting their required shots.

Eisinger said all children need to receive the appropriate immunizations so they won&#8217;t spread illnesses or diseases among their classmates.