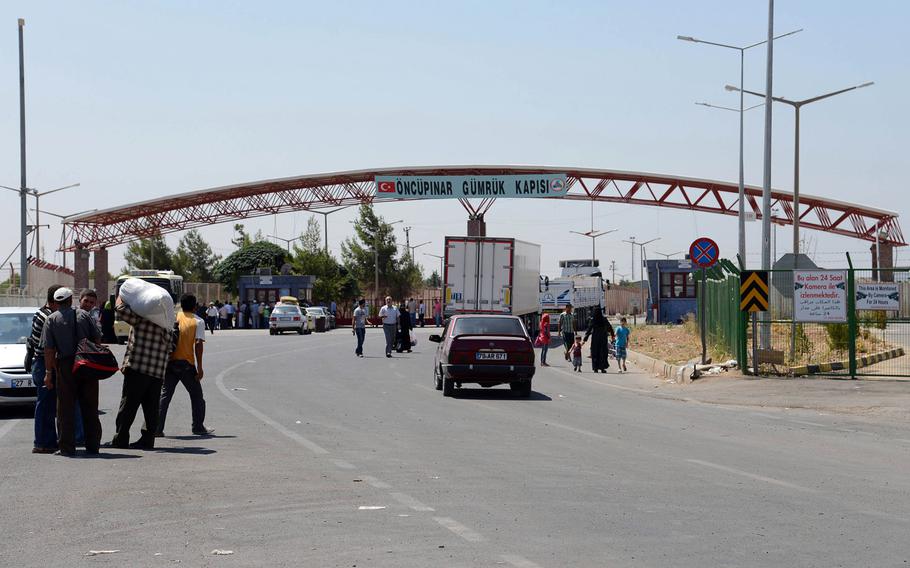 Pedestrians and vehicles travel between Syria and Turkey at the border crossing at Kilis, Turkey, in August 2013. Since the start of the civil war in Syria in 2011, scores of young men from Europe and the United States have slipped into Syria through Turkey. (Michael Abrams/Stars and Stripes)

Pedestrians and vehicles travel between Syria and Turkey at the border crossing at Kilis, Turkey, in August 2013. Since the start of the civil war in Syria in 2011, scores of young men from Europe and the United States have slipped into Syria through Turkey. (Michael Abrams/Stars and Stripes) 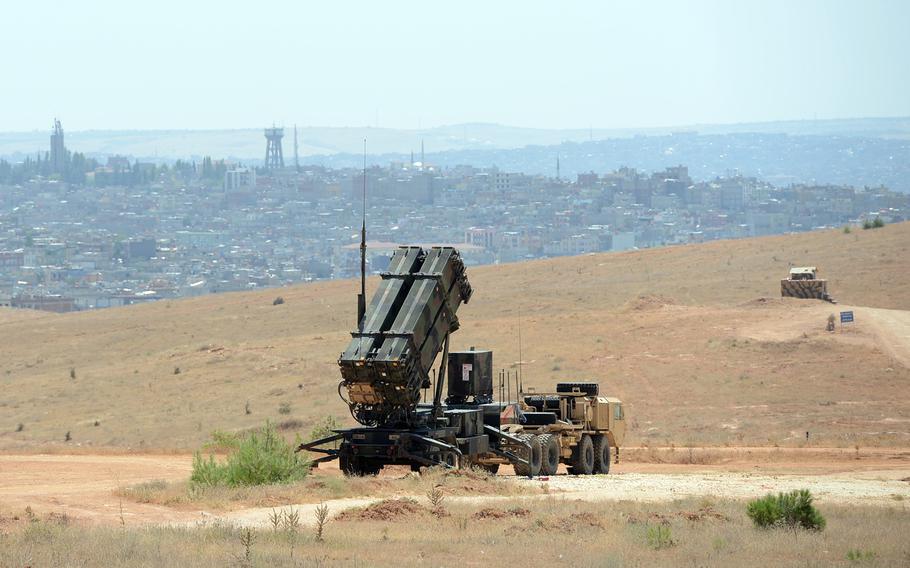 A Patriot missile launcher of the 3rd Battalion, 2nd Air Defense Artillery, sits on a hill overlooking Gaziantep, Turkey, and in the distance, Syria, in August 2013. Gaziantep, a border city, is one of the towns that has been frequently used by foreign fighters along the way to Syria. (Michael Abrams/Stars and Stripes)

STUTTGART, Germany — The man known as Kreshnik B., whom German authorities say left his Frankfurt home in 2013 to take up arms with the Islamic State of Iraq and the Levant in Syria, could be the West’s new worst nightmare.

Earlier this month, the 20-year-old German was charged by federal prosecutors with planning to carry out an attack at home after months of fighting in Syria.

Like thousands of other foreign fighters — including up to 2,000 from Europe alone — Kreshnik B. had made his way into Syria via the unchecked border with the NATO state of Turkey to join militants fighting in Syria and Iraq.

For Western officials, the unnerving question now is how many of the battle-tested fighters of European origin intend to make the same journey back across the Turkish border, ready to launch jihad at home.

“There is an enormous risk, approaching a certainty, that a Levant / Syria / Iraq dominated by ISIL would pose a direct threat to Europe and the United States,” said retired Adm. James Stavridis, NATO’s supreme allied commander until last year.

“As the ‘front line state,’ Turkey would be at a very high level of risk. Given both the direct threat of Jihadists to Europe broadly, and the danger to Turkey specifically, NATO should consider all of its options in the region,” said Stavridis, now dean of the Fletcher School at Tuft’s University.

As Islamic militants continue to gobble up territory in their quest to carve a new Caliphate stretching from western Iraq into Syria, the United States and NATO face perhaps their most serious security threat in years. On June 29, the Sunni insurgent group took the next step, declaring that it has established a formal state of its own across large parts of Syria and Iraq.

Domestic and foreign critics of the Turkish government — a key supporter and facilitator of the rebels fighting Syria’s secular regime — have repeatedly pointed out that it has tacitly acquiesced to the infiltration of fighters, arms and other supplies for the insurgents, including militant fundamentalists.

“It’s been an open door policy to jihadists in Turkey. So much so that the flight from Istanbul to Gaziantep has been called to jihad express,” said Marc Pierini, a former European Union ambassador to Turkey. “This has been going on and on and on and it is coming back to bite Turkey.”

There are signs that fighters returning to Europe can launch attacks, such as the deadly March sniper assault on a synagogue in Brussels believed to have been carried out by a French national who spent time fighting in Syria.

“Just recently, of course, we’ve seen a returnee strike a tough attack in Belgium, and then he was arrested in France. So what does this tell us? Foreign fighters can return to these nations,” said Gen. Philip Breedlove, NATO’s supreme allied commander in Europe, told reporters June 30. “They can effect an attack or some sort of problem for that nation and then move quickly across borders into other nations.”

Since the start of the civil war in Syria in 2011, scores of young men from across Europe have slipped into Syria through Turkey; a smaller number from the U.S. have made the same journey.

For Istanbul, the main objective was the elimination of Bashar Al-Assad even if that means tolerating the transit of foreign fighters, but that position now appears to be undermining European security.

In concert with Turkey, Stavridis said, NATO should be developing a range of tactics, including sending special operations forces to work with Turkish counterparts in conducting cross-border intelligence-gathering operations, unmanned air surveillance, and manned airborne warning and control system flights.

“This will be a perfect mission for AGS (the NATO Global Hawk aerial drone) and I would push to accelerate deliveries,” Stavridis said.

In addition, quick-reaction aircraft for “strike and surveillance” should be moved forward in Turkey along with a small command element from the NATO Response Force, the alliance’s crisis responders, he said. NATO also should be on top of cybersurveillance, exploiting social networks to monitor ISIL communications, he said.

Estimates vary, but it is believed that 10,000 foreign fighters have made their way via Turkey to Syria. Some of those fighters have likely carried on into Iraq, where ISIL has seized control of large swaths of the country, experts say.

“Turkey’s Syria policy has played a major role in fomenting the conditions that allowed (ISIL) to capture Mosul,” Turkish columnist Kadri Gursel wrote in a recent essay for Al-Monitor, a regional news site.

“Ankara, by ignoring its own border security, had allowed its Syria border to become a two-way ‘jihadist highway.’ Thousands of international jihadists used this highway to reach Syria. Though al-Qaeda outfits did not topple the Damascus regime, they made a ‘jihadist bonanza’ of northern Syria thanks to this highway.”

ISIL is also believed to be in control of at least two border crossing areas along Syria’s expansive Turkish border, underscoring that the group moves freely on NATO’s doorstep.

The Turkish Foreign Ministry did not respond to questions about what measures it is taking to secure the border.

However, Turkish Foreign Minister Ahmet Davutoglu, speaking during a meeting with fellow ministers in Brussels on Wednesday, acknowledged a host of security challenges in the region around Turkey.

“Now it is time to consult more frequently, act together as two strategic allies, and that cooperation will continue in all things and all challenges,” said Davutoglu, appearing alongside U.S. Secretary of State John Kerry.

Added Kerry: “Turkey is such a key partner in so many ways, but particularly given what is happening in Syria and now in Iraq with ISIL and the participation that we’ve had. We have obviously some major issues to confront.”

NATO will likely need to keep a closer eye on its southern flank even as it contends with challenges in the east, where tensions with Russia over the crisis in Ukraine continue to absorb much of the alliance’s attention, analysts say.

The issue of instability along the Turkish border “is now going to be front and center,” said Ian Lesser, senior director for foreign and security policy at German Marshall Fund’s Brussels office. “The alliance right now is very much looking east and to the crisis in Ukraine ahead of the upcoming summit in Wales, but there are mounting challenges and risks in the south as well. These are things that will affect the security of western Europe and Europe as a whole. NATO will have to take this on.”

If drones aren’t already deployed to monitor Turkey’s border areas, that could be one possible move for NATO in the near future as it seeks to stem the back-and-forth flow of fighters, Lesser said.

For Turkey and its allies in NATO, the challenges along the Turkish border with Syria are daunting and more complex than simply shutting down transit routes or building a fence. The border is a 550-mile mix of rugged terrain, dotted with assorted urban centers where fighters can blend into the population. A shadowy network of fixers and enablers has taken root in Turkey’s border areas, facilitating the transit of fighters in what has become a lucrative business, experts say.

“It is very difficult to distinguish who is who in these areas,” Lesser said.

Gaziantep, a border city and host to a U.S. anti-missile Patriot battery, is one of the towns that has been frequently used by foreign fighters along the way to Syria.

Recently, international pressure on the Turkish government has intensified, and there are signs that the country is doing more to get control over who is moving through the country, Pierini said. “It has slowed down due to tighter controls by the Turks, but there are still people crossing,” he said.

But the corresponding rise of ISIL now poses a serious threat to Turkey and the region as whole, prompting dire warnings from top European political figures.

“The people in that regime, as well as trying to take territory, are also planning to attack us here at home in the United Kingdom,” British Prime Minister David Cameron warned during a June 18 speech before the House of Commons.

Experts acknowledge there are no quick and easy solutions to a crisis that has its roots in deep sectarian divisions in Syria and Iraq, which have served as a magnet for foreign fighters. Stavridis, who has likened the current unraveling in Iraq and Syria to the upheaval during Europe’s 150-year religious Reformation, said the West must remain engaged in the region but also recognize the limits of its ability to influence the forces at play.

“We must recognize this is a lethal mix indeed of religion and politics and do all that we can to stabilize the situation. Simply avoiding it will ultimately cause terrible effects in the United States and Europe as radicals come back,” wrote Stavridis in a recent essay in Foreign Policy. “But at the same time recognize that fundamentally this is not our problem to solve. The ultimate solutions must come from within Islam and the region. This means working with the more moderate regimes and pushing for balance in the treatment of Sunni and Shiite.”

In the meantime, Breedlove says NATO must guard against any spillover into Turkey or beyond.

“This (Turkey) is an ally that, if we have to, we will defend,” Breedlove said. “And so we’re concerned about all of the operations by all of the players on the south side of that border that would ... increase the flow of foreign fighters or any of the things that could affect us in Europe.”