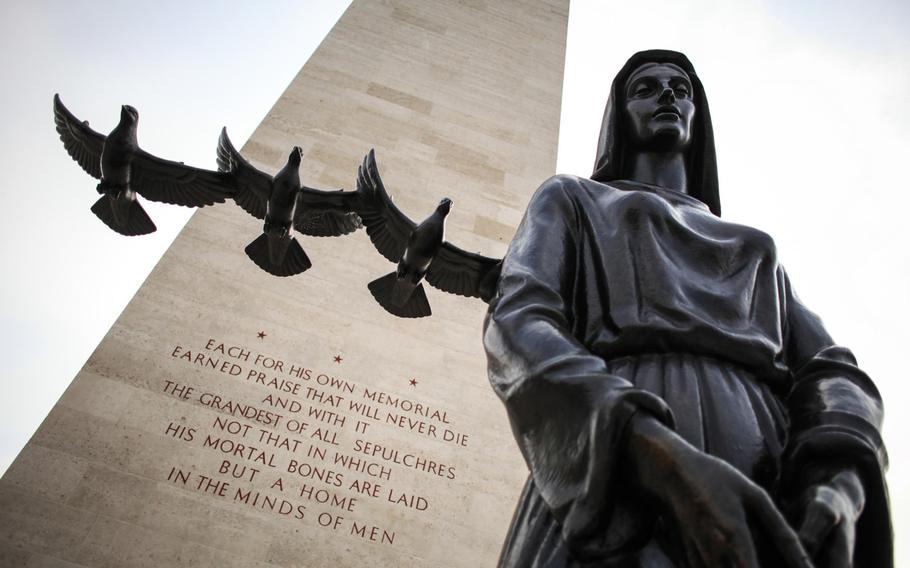 A statue stands before the chapel at the Netherlands American Cemetery and Memorial in Margraten, Netherlands, where 8,301 American dead from World War II are buried. (Matt Millham/Stars and Stripes)

A statue stands before the chapel at the Netherlands American Cemetery and Memorial in Margraten, Netherlands, where 8,301 American dead from World War II are buried. (Matt Millham/Stars and Stripes) Richard Arsenault, assistant superintendent of the Netherlands American Cemetery and Memorial in Margraten, Netherlands, talks with relatives of World War II veterans who came to visit the graves of the six men who died when their plane was shot down over Belgium on April 13, 1944. (Matt Millham/Stars and Stripes) Ernest Schrasser, who cares for the grave of Staff Sgt. Raymond Marz at the Netherlands American Cemetery in Margraten, Netherlands, shows a picture of his parents undertaking the same task. Schrasser's father adopted the grave in 1946, and the job of caring for it has been in the family ever since. All 8,301 American World War II graves at the cemetery have been similarly adopted by Dutch families. (Matt Millham/Stars and Stripes) 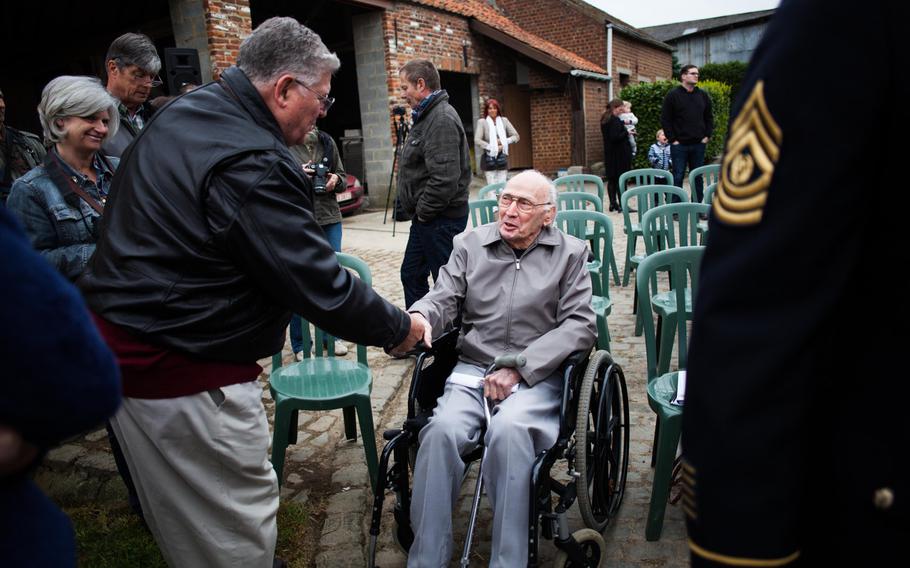 Albert Brady, whose father Lloyd Brady was killed in a plane crash during World War II, shakes hands with Troy Hollar, who managed with four other men to bail out. Hollar, Brady and about two dozen other family members of the crew went to Fouleng, Belgium, on Sunday, April 13, 2014, for a ceremony marking the 70th anniversary of the crash. (Matt Millham/Stars and Stripes) Belgian dignitaries and former members of the Belgian resistance from World War II stand during a ceremony in Fouleng, Belgium, honoring the crew of an American B-17 bomber that crashed here on April 13, 1944. Four crew members bailed out and survived; six others died. (Matt Millham/Stars and Stripes) 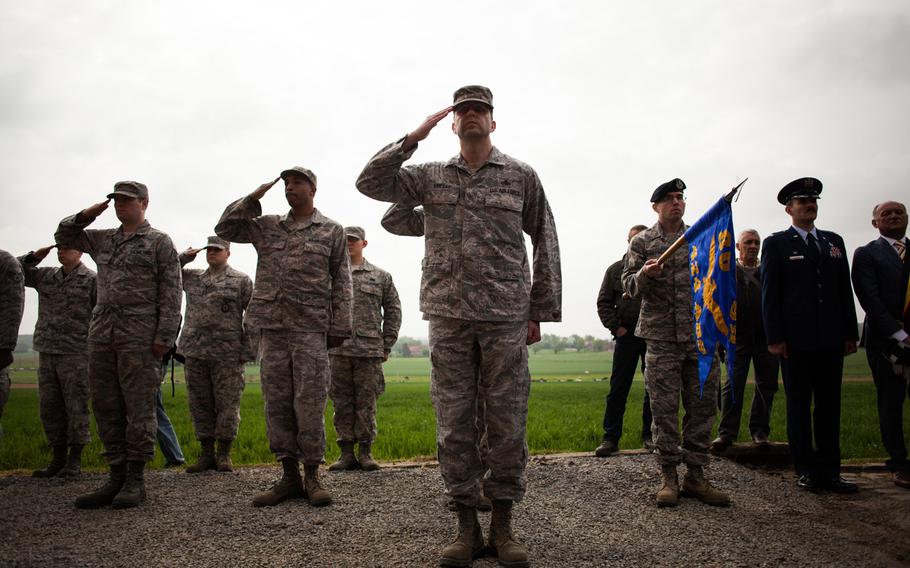 U.S. airmen from Chievres Air Base in Belgium render honors during a ceremony commemorating the 70th anniversary of an American B-17 bomber crash in Fouleng, Belgium. Four crewmen bailed out of the plane after it was hit by German flak guns; six others died when the plane crashed into the field behind the airmen. (Matt Millham/Stars and Stripes) 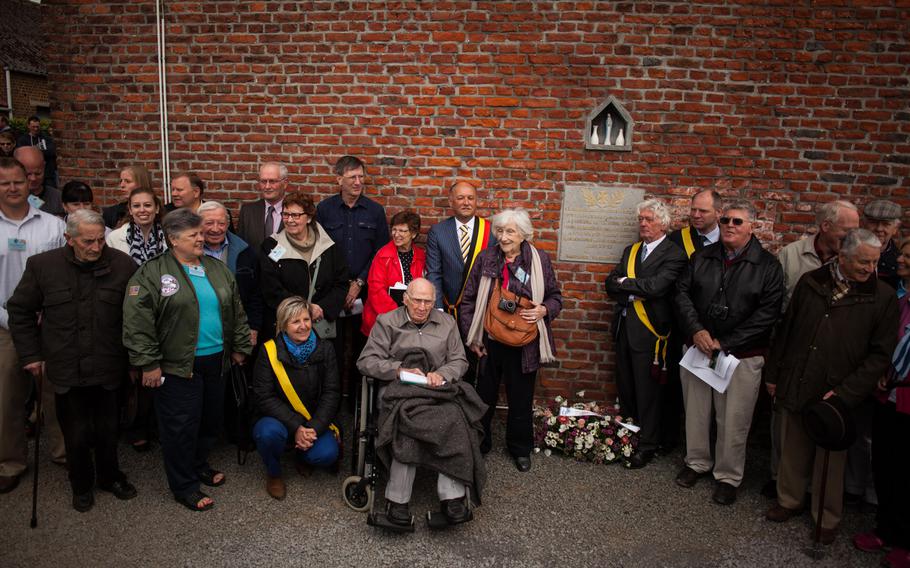 Troy Hollar, seated center, poses for photos with Belgian officials and the relatives of some of his former crew mates from World War II in Fouleng, Belgium, on Sunday, April 13, 2014. The village, along with U.S. forces from nearby Chievres Air Base, held a memorial ceremony marking the 70th anniversary of a B-17 bomber crash here in which Hollar was involved. Hollar and three other crew members bailed out before the plane, hit by German flak, crashed in a field. (Matt Millham/Stars and Stripes) Cows graze near an American flag that marks the spot where an American B-17 bomber crashed in a field in Fouleng, Belgium, on April 13, 1944. (Matt Millham/Stars and Stripes) Troy Hollar, center, speaks with an American airmen moments before he is granted honorary citizenship in the village of Silly (Fouleng), Belgium, where his B-17 bomber crashed in World War II. Hollar and three others survived, bailing out before the plane hit the ground. (Matt Millham/Stars and Stripes) 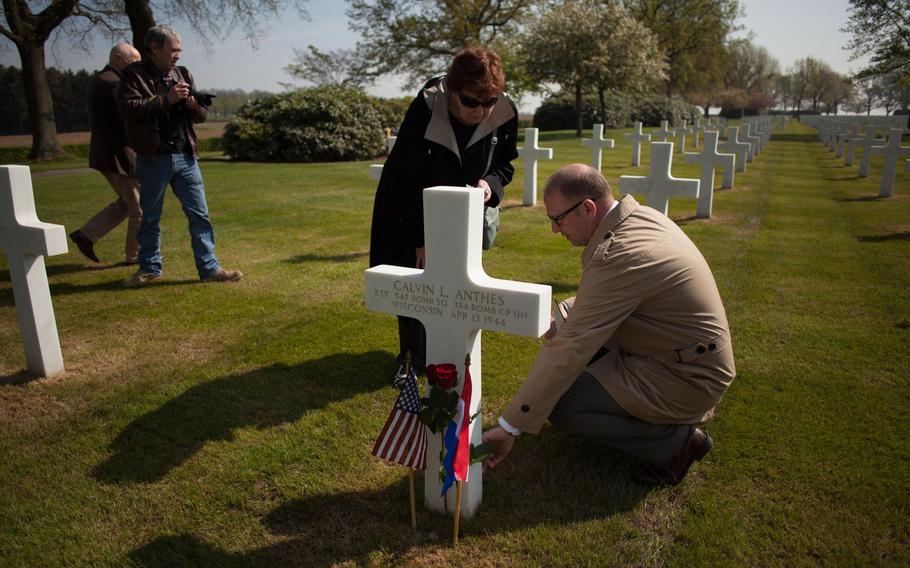 Richard Arsenault, assistant superintendent of the Netherlands American Cemetery and Memorial in Margraten, Netherlands, explains the markings on the headstone of Calvin Anthes to his daughter, Lois O'Keefe, who was born a day after her father died. Anthes and five other airmen died April 13, 1944, after their B-17 bomber was hit by German flak guns and crashed in Fouleng, Belgium. (Matt Millham/Stars and Stripes)

FOULENG, Belgium — Some townspeople here still remember that day in April 1944 when a burning American B-17 screamed low overhead, crashed and exploded in a nearby field.

Crippled by German flak, the bomber sailed like a flaming arrow into ground now occupied by dozens of grazing cows. Antonio De la Serna, who was 11 when he witnessed the crash, shudders when recalling the sputtering roar of the dying engines.

“We were quite afraid,” he said.

But seven decades later, the town of Fouleng celebrates that day as if it were a holiday. Four Americans bailed out before impact. One was captured by the Germans; three were rescued by local residents. It was the villagers’ first brush with the forces that would, five months later, liberate Belgium.

“The reason we are here in Fouleng is that we all have a duty to remember,” Mayor Christian Leclercq said in a ceremony Sunday, marking 70 years to the day that the Flying Fortress crashed here. “For you Americans, it is to show your affection to the servicemembers who defended the country. For us Belgians, it is to thank the Americans for joining World War II against the invasion of the Nazis.”

The commemoration drew at least 100 people — the best-attended event marking the crash since a church service in 1944.

Those numbers were driven largely by the return of 94-year-old Troy Hollar, the sole surviving member of that ill-fated flight, and of more than 20 family members of the crew.

But time is also a critical factor.

Commemorations across the Continent are pulling out all the stops this year to mark the 70th anniversary of the last year of World War II, with an expectation that by the next major milestone in five years there might not be many WWII veterans to celebrate with.

The Netherlands American Cemetery, where 8,301 U.S. servicemembers from World War II are buried, is the second-most visited American cemetery in Europe — only Normandy gets more traffic. Yet despite healthy attendance of between 250,000 to 300,000 visitors annually, only three veterans of the war have visited in the last year, said Richard Arsenault, the cemetery’s assistant superintendent.

Not long ago, much of his time was spent accommodating veterans and their direct descendants.

“But now we realize that we are getting less,” he said. Visits by the siblings of World War II veterans also are in steep decline; same, too, for their children.

“We are getting a lot of, ‘He was our great uncle,’ or things like that,” Arsenault said.

Still, interest in the cemetery has not waned. Numerous groups, many of them made up of World War II enthusiasts from around Europe, are jostling to get their events on the cemetery’s calendar.

The crush is even more severe in Normandy, a large region of northern France where tens of thousands of Allied troops landed on five widely spread beaches on June 6, 1944, to establish the foothold that would lead to Germany’s defeat. Accommodations at local hotels have long been booked solid for the days of parades, fireworks, re-enactments and visits by world leaders that will commemorate the largest amphibious assault in history.

But there are scores — if not hundreds — of other events around the Continent over the next year, leading up to the 70th anniversary on May 8, 2015, of the Allied Victory in Europe. Many are organized by local groups and not much publicized. Others draw huge crowds and celebrities.

On April 28, a group dedicated to preserving the history of Exercise Tiger — a large-scale rehearsal for the D-Day invasion of Normandy — will hold a memorial service in honor of the 946 American servicemen who died at Slapton Sands in Devon, England.

On May 18, Britain’s Prince Harry goes to Italy to commemorate four major battles between January and May 1944 in which nearly a quarter-million Allied troops from Britain, the United States, Poland, India, France and New Zealand took part. Referred to by some as the Stalingrad of the Italian front, the fourth battle ended with the liberation of Monte Cassino and opened a passage for the Allies to advance on Rome.

Celebrations across France will dominate much of the late spring and early summer, starting with the Normandy invasion in June and continuing with the liberation of Cherbourg June 26, Caen on July 9, and scores of other lesser-known places along the route to Paris, which was retaken by friendly forces on Aug. 25, 1944.

In Belgium, where Fouleng held a memorial ceremony Sunday, the real celebration kicks off in September to mark the country’s liberation. From Sept. 5-7, the city of Mons will host “Tanks in Town,” featuring a large collection of vintage armor to commemorate its liberation by forces from the U.S. 3rd Armored Division.

The Netherlands American Cemetery and Memorial will be host to two concerts and a film from Sept. 12-14 to commemorate the country’s liberation.

Also starting Sept. 14, the Belgians and Dutch launch a week of celebrations marking Operation Market Garden, the Allies’ unsuccessful attempt to bring the war to an early end depicted in the classic war film “A Bridge Too Far.” Though the schedule isn’t set, it’s expected to include convoys of some 600 vintage military vehicles that will drive from Leopoldsburg, Belgium, to Veghel, Netherlands, Sept. 14, and from Veghel to Nijmegen, Netherlands, Sept. 20.

After that, the winter is peppered with events in remembrance of the Battle of the Bulge, the German counteroffensive that left some 19,000 Americans dead and many more wounded or captured. Thousands of people, many in vintage uniforms, are expected to take part in road marches and re-enactments with special attention placed on the feats of the American 101st and 82nd Airborne Divisions.

All of these events are expected to be bigger than usual because, for re-enactors and other World War II enthusiasts, “if [the year] ends in a five or a zero, they’re going to want to be part of it,” Arsenault said.