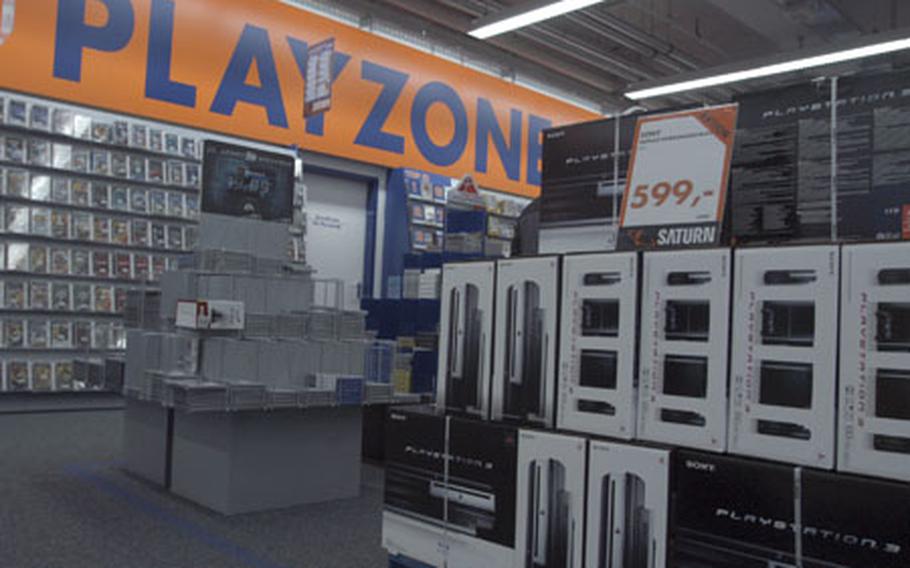 A stack of new Sony PlayStation 3 game consoles sits Friday on the sales floor of the Saturn electronics store in Darmstadt, Germany. Sony launched the PS3 on Friday in Europe. Shortages of the systems, and of Nintendo&#39;s Wii console, at Army and Air Force Exchange Service stores in Europe are attributed to supply shortages of U.S. versions of both. (Matt Millham / S&S)

Brawls, gunshots and price-gouging marked the introduction of Sony&#8217;s newest game console to the U.S. in November, but no such shenanigans marred the release Friday of the PlayStation 3 in Europe.

The system&#8217;s launch was so sober, in fact, that Sony tried to stoke a frenzy at its midnight debut in London by offering free 46-inch HD televisions to everyone who bought a console at the flagship Virgin Megastore on Oxford Street. Even with that incentive &#8212; the televisions cost about 2,500 British pounds (about $5,000) apiece &#8212; the store sold just a little more than 100 systems, according to the British Broadcasting Corp.

In Germany, the launch was even more sedate. The Saturn electronics store in Darmstadt opened as usual at 10 a.m. to a crowd of about 15 people, according to Frank Hausherr, a sales manager at the store.

The timing of the launch here also likely had something to do with gamers&#8217; tepid response, Hausherr said. &#8220;The hype in November and December, it&#8217;s much higher&#8221; because of the holidays.

More than two dozen PS3 consoles were stacked on the sales floor at his store, and he had more in the back, he said.

But less than two miles away at the U.S. Army&#8217;s Cambrai-Fritsch Kaserne, the Army and Air Force Exchange Service had no PS3 consoles. The shortage of the systems &#8212; and of Nintendo&#8217;s Wii game system, which launched in November in the U.S. and in December in Europe &#8212; at exchanges across Europe has not gone unnoticed.

&#8220;AAFES, like other retailers, has received consistent allocations since the launch of both products, however the units are sold immediately and we are then out of stock until the next allocation,&#8221; Lt. Col. David A. Konop, an AAFES spokesman, wrote in an e-mail response to Stars and Stripes. &#8220;Other retailers are experiencing the same.&#8221;

Since November, AAFES has gotten about 4,000 Wii and 2,500 PS3 systems in Europe. AAFES&#8217; latest shipment of Wii consoles arrived in Europe on March 5, but those were mainly for distribution to downrange stores, Konop wrote. The exchange&#8217;s latest shipment of PS3 consoles shipped March 19 from Atlanta, and is en route to the exchange&#8217;s European stores.

However, don&#8217;t bother camping outside your local PowerZone to be first in line to get one. Sales of both systems are still being handled by a lottery system. &#8220;There are no waiting lists, and this guidance is applied worldwide,&#8221; Konop wrote.

&#8220;Demand worldwide and in every retail market exceeds supply on Wii&#8221; consoles, according to Konop. Indeed, the systems are hard to find even in Germany. But &#8220;PS3, while still very tightly allocated and largely unavailable from Sony, has severely lost demand in 2007,&#8221; he wrote.

There&#8217;s no telling when the console drought at AAFES will end either.

&#8220;All retailers will start to get more consoles in the coming months,&#8221; Konop wrote. However, &#8220;Neither Nintendo nor Sony has committed to time frames for unlimited availability.&#8221;