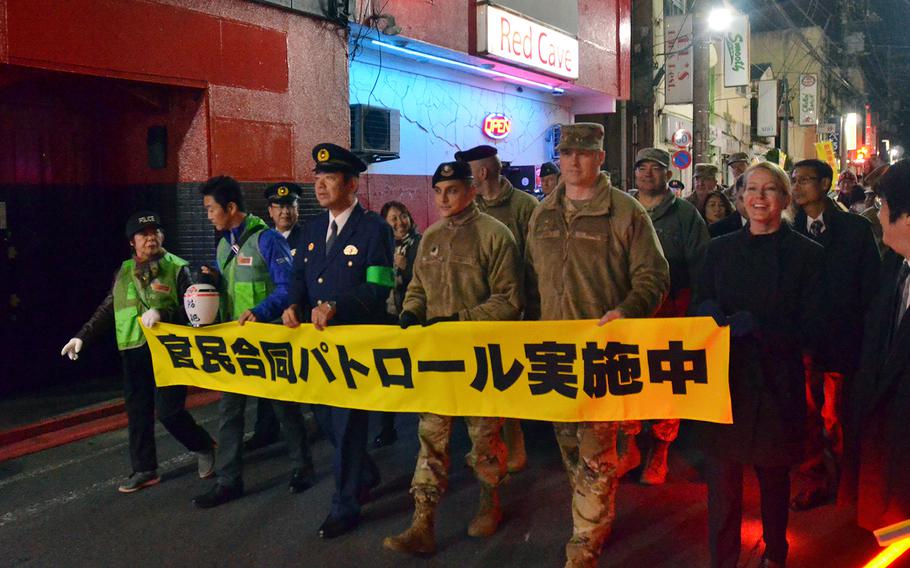 U.S. military personnel join Japanese police on a patrol through an entertainment district near Yokota Air Base, Japan, known as Bar Row on Wednesday, Nov. 20, 2019. (Seth Robson/Stars and Stripes)

YOKOTA AIR BASE, Japan — Air Force security forces teamed up with Japanese police Wednesday to patrol a nightlife area popular with service members at the home of U.S. Forces Japan in western Tokyo.

Police all over Tokyo are conducting similar patrols of entertainment districts as they prepare for crowds of holiday revelers.

Wednesday’s event was the third joint patrol since 2017 of an area between Yokota’s main gate and Fussa Station. It includes Fussa city’s Bar Row, which has a history of prostitution and other illegal activities.

In the past, establishments in and near the district have been placed off-limits to U.S. personnel due to fights or unlawful sales of unspecified controlled substances.

“We are all one team,” the commander of Yokota’s security forces, Lt. Col. Jonathon Murray, told the group of several dozen police and other officials before they marched through the area carrying a yellow banner announcing the patrol.

There have been few high-profile incidents involving U.S. service members there in recent years, possibly due to a 1-5 a.m. curfew for some enlisted troops. The curfew dates to October 2012, when restrictions were imposed following the gang rape of a woman on Okinawa by two U.S. sailors.

However, Bar Row retains a reputation for vice. Late last year, the 70-year-old manager of a hostess club was arrested for hiring women to work as prostitutes, according to Japan Today. There are 20 similar establishments near Fussa Station, the report said.

Murray, 39, of San Diego, said Fussa police and Yokota security forces support each other upon request. Security forces will also pass on reports of crimes involving Japanese citizens to Japanese police, he said.

Most incidents involving U.S. personnel in Fussa are “entertainment related,” he said.

Maj. Heather Beatty, commander of the Air Force Office of Special Investigations at Yokota, told the joint patrol that her office teamed up with Fussa police to solve several recent crimes. Japanese police declined to provide details of those incidents.

The most serious recent crime involving a Yokota airman happened on the other side of the base.

Master Sgt. Nicholas Vollweiler, 35, was stabbed to death at his home in Tachikawa, near Yokota’s east gate, on Nov. 9, 2018. Aria Saito, a Tokyo office worker who has been charged with murder in the security forces member’s death, is awaiting trial.