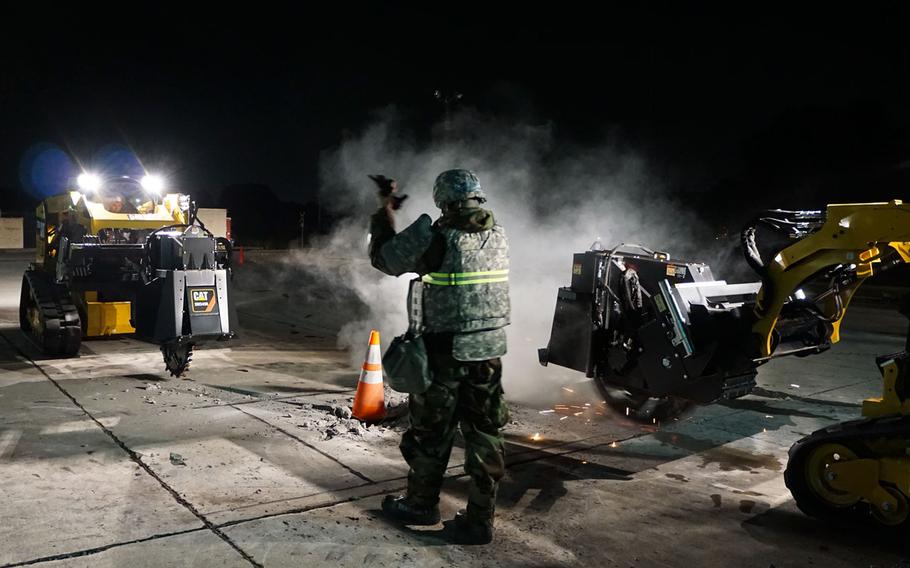 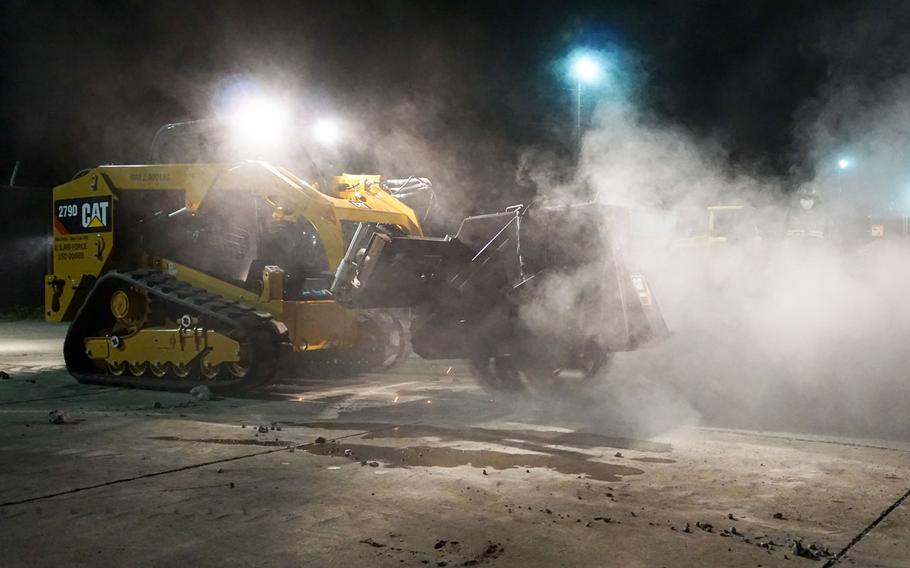 Buy Photo
Sparks and dust fly as airmen from the 374th Civil Engineer Squadron at Yokota Air Base, Japan, cut into a simulated flight line with a concrete saw during a rapid airfield damage repair exercise early Friday, Oct. 27, 2017. (Leon Cook/Stars and Stripes)

YOKOTA AIR BASE, Japan — Air Force engineers are learning a new repair method that should have runways back online within a couple of hours if enemy missiles strike U.S. bases in Japan.

Airmen from the 374th Civil Engineer Squadron practiced the new “rapid airfield damage repair” procedure early Friday just as they would do if an enemy attacked the headquarters of U.S Forces Japan and 5th Air Force in western Tokyo.

Experts believe U.S. bases are in North Korea’s crosshairs. An analysis of a missile test conducted by the North earlier this year suggests that it was designed to simulate a strike on Marine Corps Air Station Iwakuni.

North Korea isn’t the only potential threat. Google Earth images showing Chinese missile test sites on the edge of the Gobi Desert resemble ships docked at Yokosuka Naval Base and aircraft and facilities at Kadena and Misawa air bases.

There’s been a steady stream of North Korean missiles flying over and around Japan this year, and U.S. forces conduct several exercises that have drilled troops on how they should respond to such an attack.

Crews start by clearing debris using heavy equipment. Then they cut a square around damaged tarmac, remove more debris, fill the hole with concrete and top it with a rapid-set cap, he said.

Many of the Yokota airmen had never practiced the repair method or done it at night before the training.

“Tonight, we’re clearing four craters, and we should be able to do that in about two hours,” Hy said.

The new repair method was developed in 2014. An older way of fixing bomb-damaged concrete, known as rapid runway repair, dates to the 1950s. That method allows engineers to repair three large craters from 750-pound bombs in four hours, Hy said.

The old technique involved covering craters with folded fiberglass mats that degrade every time an aircraft rolls over them, he said.

“The folded fiberglass mat was more for covering a few large craters,” he said. “With today’s warfare capabilities, we’re focused on bomblets, so we have smaller craters and smaller repairs.”

The old method is still practiced and would be used for larger craters if necessary, Hy said.

The Air Force estimates that 3,000 aircraft of any size or weight can pass over repaired areas repaired using the new method without degradation.