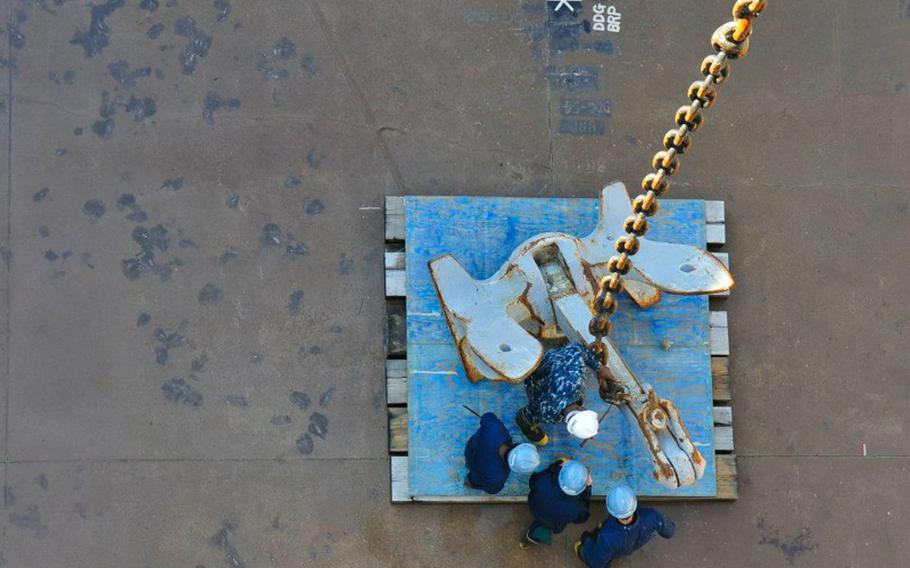 Shipyard workers remove the guided missile destroyer USS McCampbell's anchor while the ship sat in drydock at Yokosuka Naval Base, according to a photo posted Dec. 13, 2011, on ship's Facebook site. A Japanese shipyard worker died Jan. 9, 2012, as a result of an accident involving an anchor at the McCampbell's drydock. It remained unclear exactly how the death occurred. (Courtesy of the U.S. Navy)

This report was updated Jan. 10, 2012, at 3:08 a.m. ESTYOKOSUKA NAVAL BASE, Japan &ndash; The Japanese shipyard worker who died Monday at Yokosuka Naval Base was removing paint from the USS McCampbell&rsquo;s anchor when it fell over and crushed him, Japanese police said Tuesday.The victim, a 31-year-old man from Miura City in Kanagawa prefecture, died upon impact at Drydock #5 around 2:20 p.m., a spokesman for the Kanagawa prefectural police said Tuesday.The center line anchor fell on the victim after he began using a high-pressure water sprayer to remove the paint, police and Navy officials said Tuesday.Although details of the incident are still under investigation by Japanese and military officials, preliminary reports indicate that the anchor&rsquo;s fluke struck the victim and pinned him to the floor of the drydock pit.The 9,000-pound anchor was not attached to its chain at the time, officials said.The victim, a subcontractor for Sumitomo Heavy Industries, was one of two men assigned to the anchor and the first to attempt to remove its paint, police said.Other nearby workers were removing paint from the destroyer&rsquo;s hull at the time, police said.No other workers were injured during the accident, Navy spokesman Cmdr. KC Marshall said Monday night.Both the Navy and Sumitomo officials expressed their condolences regarding the incident."We offer our sincerest prayer for him to rest in peace,&rdquo; said Sumitomo spokesman Nobuhiro Kano on Tuesday. &ldquo;Meanwhile, we take the accident seriously and will take steps to prevent the recurrence of such an accident.&rdquo;The USS McCampbell, a guided-missile destroyer, has been undergoing a major overhaul since November. The ship had its anchor removed on Dec. 13, according to photos posted on the ship&rsquo;s official Facebook page.The death remains under investigation by Japanese and U.S. Navy law enforcement, officials said Tuesday.Elena Sugiyama contributed to this report.slavine@pstripes.osd.milsumidac@pstripes.osd.mil