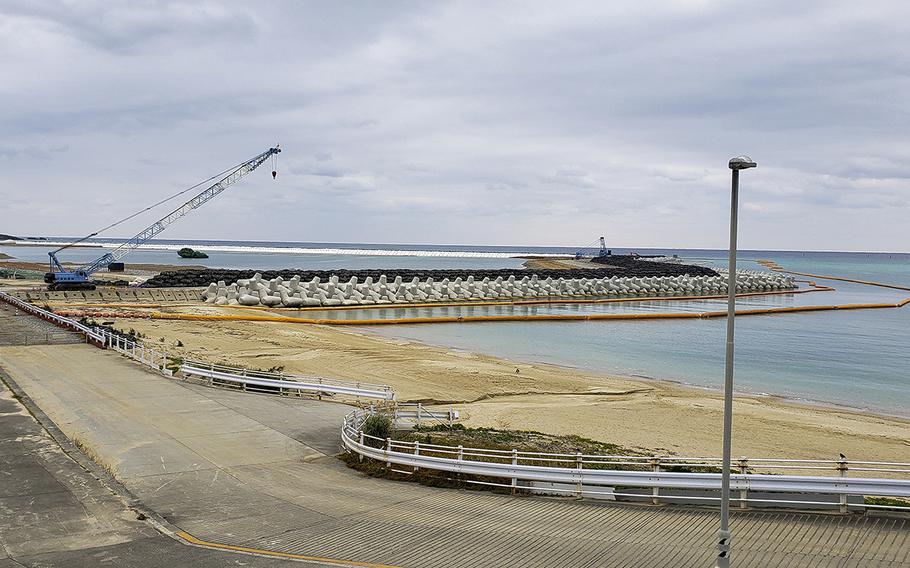 Buy Photo
Landfill work for a Marine Corps runway at Camp Schwab, Okinawa, is seen on Jan. 19, 2019. (Stars and Stripes)

CAMP FOSTER, Okinawa — The Japanese government has restarted construction on the coastal airfield in northerneastern Okinawa that will one day facilitate the relocation of Marine Corps Air Station Futenma.

Work resumed Friday on “area 2-1” and “area 2” at the Marine base Camp Schwab in Henoko, said a spokesman for the Okinawa Defense Bureau, which represents Japan’s Defense Ministry on the island.

Construction was suspended April 17 when a civilian security guard tested positive for the coronavirus.

“We have asked all the contracting companies to apply the best coronavirus mitigation measures: use of alcohol sprays, wearing masks, no big meetings and such,” the bureau spokesman said.

Between 1,000 and 2,000 workers enter Schwab for construction work daily.

The resumption of construction angered prefectural officials who are still trying to fight the relocation within Okinawa in the courts.

That “shows that the majority of Okinawa’s people are against the new base,” he said.

Japan’s Supreme Court in March rejected a lawsuit brought by the prefectural government to block the relocation project. Another lawsuit in a local court is pending, a prefectural spokesman said Friday. No hearing date has been scheduled due to the coronavirus.

“Currently, we cannot stop the construction by law,” the prefectural spokesman said.

Resuming work at the site comes after the Japanese government in May acknowledged that project completion has been pushed to at least 2030 and the overall cost has jumped to $8.7 billion. The project had been set for completion in 2014 by bilateral agreement at a cost of $2.2 billion.

Defense Bureau officials on April 21 asked the prefectural government to approve changes to the project. Tamaki has up to 223 days to respond. Should he deny the request, the case will be headed back to the courts, meaning potentially more delays and cost overruns.

Defense Bureau officials said they plan to move on to the Oura Bay side of the project and begin work there, once the prefecture agrees on the proposed changes to construction methods to reinforce the soft floor of the bay. They do not plan to wait for completion of the current phases.