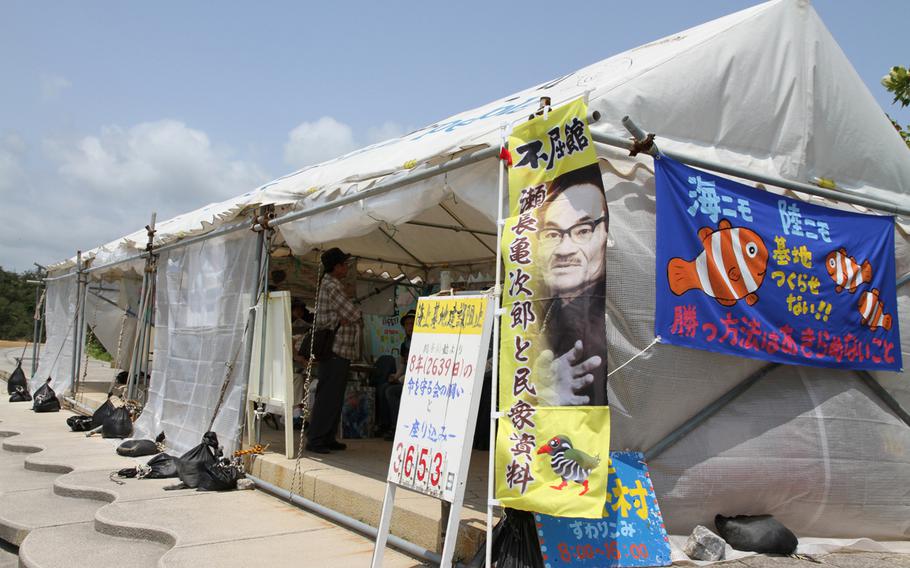 Buy Photo
The protest tent at Henoko has been manned every day for 10 years, as the Japanese seek to block landfill and construction of a runway into Oura Bay that would replace flight operations at Marine Corps Air Station Futenma. (Matthew M. Burke/Stars and Stripes)

CAMP FOSTER, Okinawa — Workers began installing buoys and floats in the waters off Camp Schwab on Thursday, marking the start of construction that will one day facilitate the move of Marine Corps Air Station Futenma to the northern part of the island, as well as the relocation of thousands of U.S. Marines to Guam as part of the Pacific realignment.

Small-scale protests occurred in front of the Marine Corps base and at the nearby Henoko fishing port as workers set up the boundary to the planned reclamation project in Oura Bay.

A site survey is the first step in the project, which will eventually result in the building of a V-shaped airfield that will extend into the bay to facilitate takeoffs and landings for U.S. military aircraft now stationed at Futenma.

The landfill for the airfield has been a sore spot for locals who fear damage to the bay’s diverse marine ecosystem.

Japanese officials declined to say when the survey would commence, but Japanese media reported it could happen as soon as Monday.

“Forcibly conducting a survey for landfill work against the will of residents violates both human rights and rich biodiversity of the region,” Inamine said in a statement. “I will stand firm on my belief that we would never allow to have a new military base, neither on land nor at sea. I am resolved to continue to fight against the government’s policy.”

Maritime Self-Defense Force and coast guard ships were out in force as work began to install the buoys about 7:30 a.m. Thursday. At the same time, protesters held signs and took refuge from an unrelenting sun under a blue tarp on the sidewalk in front of Camp Schwab.

At Henoko, longtime activists against the move were subdued but vowed to continue the fight, resigned to the fact that they may have lost this particular battle.

“We may not be able to stop the landfill work, but the losers are the mainland and its government,” said Osamu Taira, 82, an Okinawa-born pastor who has been involved in protest movement for 18 years. “Construction of a new military base on Okinawa will trigger Okinawa’s departure from Japan. Independence will become an option.”

The protesters criticized Tokyo for the burden placed upon Okinawa by hosting a disproportionate number of U.S. military forces. Of the approximate 50,000 U.S. troops based in Japan, about 30,000 are located on the small island prefecture, which is the poorest in Japan. They called the runway and planned relocation of the Marine aircraft to their part of the island undemocratic.

Marine Corps officials did not respond to a request for comment by press time.

The issues behind the protest movement on Okinawa are deeply rooted in Okinawan history.

Once an independent kingdom, the island was occupied by the Chinese, the Japanese and the U.S. Many still harbor resentment for civilian casualties at the end of World War II and the Japanese decision to abandon the island and fortify the mainland after America’s decisive victory there in 1945. Okinawa was reverted back to Japanese control in 1972.

The relocation of Marines from the densely populated center of the island was first advocated in the late 1990s over fears of aircraft crashes. But the plan really gained momentum after the 2004 crash of a CH-53D Sea Stallion into Okinawa International University.

Still, the protesters claim the majority of Okinawans are against keeping the Marine Corps air operations on Okinawa.

“Construction of a new military base is about to start by ignoring the voices of the people of Okinawa who are against it,” said protest organizer Takako Shinohara, 50, who moved to Okinawa from Gifu prefecture. “We may not be able to stop this construction, but Okinawa’s voice will certainly reach out to the rest of the world.”

The protesters said the November governor’s election would act as a referendum on the project and let their voices be known to the world. Nakaima is running against Naha Mayor Takeshi Onaga and former state minister under the Democratic Party-led government Mikio Shimoji.

Nakaima has drawn fire as of late for signing off on the project in December.

Onaga is adamantly against it, and Shimoji has called for prefectural referendum.

There is also an ongoing lawsuit in U.S. federal court over the effects the runway would have on the dugong, a large sea mammal that uses the bay as a feeding ground.