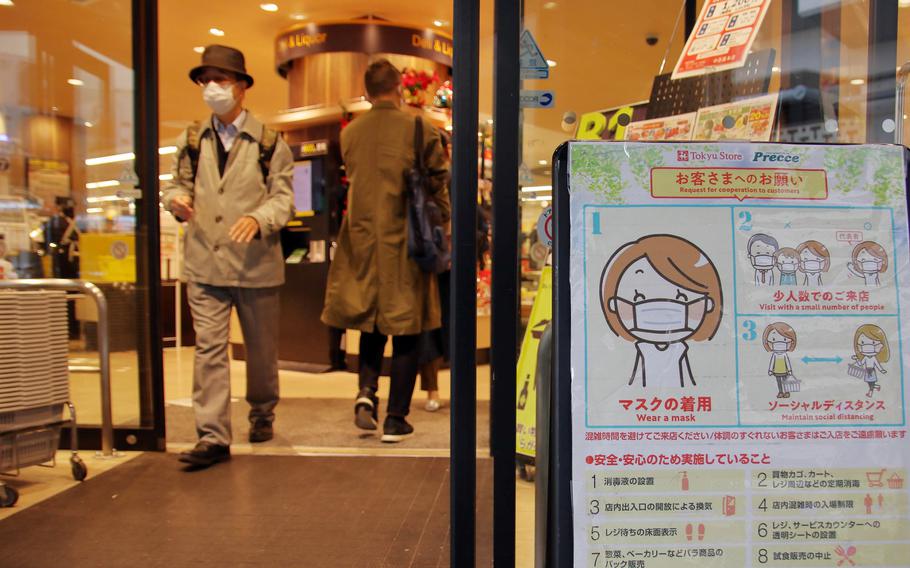 The Tokyo Metropolitan Government recorded 534 new infections, according to a report in The Japan Times, surpassing the previous peak, 493 cases, reached the previous day.

U.S. military commands in Japan and South Korea announced a combined 12 new patients Thursday, all new arrivals. Nine of those are on the Korean Peninsula.

Japanese Prime Minister Yoshihide Suga said his country is in “the most alarming status” of the pandemic, according to a video statement on his office’s website Thursday. He appealed to residents to wear masks, especially while talking and dining together, a practice that health experts say creates many coronavirus cases.

“We are having a panel meeting with prevention specialists and ministers to discuss the current situation, and we will take some measures shortly,” he said.

Tokyo Gov. Yuriko Koike on Thursday raised the metro area’s health alert to the highest of four levels, but government statements are more advice than enforceable orders. She did not impose travel restrictions or shorten business hours.

During a Tokyo coronavirus monitoring panel meeting Thursday afternoon, Koike said metro residents should also dine only in small groups for short periods in an area with good air circulation, according to a meeting video on the metro government website. The elderly, she said, should not dine in groups at all.

“The virus is spreading rapidly,” she said.

Central Tokyo is off-limits to most U.S. military personnel except for official business.

U.S. Army Japan, headquartered at Camp Zama just outside Tokyo, on Thursday banned all non-essential travel to Yokota Air Base, 26 miles away in western Tokyo, until Thanksgiving Day, according to a post on the Army Facebook page. Yokota on Wednesday reported 14 new cases on base.

Farther south at Kadena Air Base on Okinawa, two people tested positive before exiting quarantine, according to a base Facebook post. The pair had recently returned from travel outside of Japan. Contact tracers identified one person who was also quarantined, according to the base.

Okinawa prefecture, home to the majority of U.S. troops in Japan, had 54 new cases and one coronavirus death Thursday, a public health official told Stars and Stripes. The prefecture last reported more than 50 infections on one day three months ago.

Two new cases were reported at the Marines’ Camp Foster and Marine Corps Air Station Futenma, the official said. The Marines did not respond to an emailed request for further information. The service stopped announcing new cases in early November, citing security concerns.

The U.S. military in Japan typically does not specify whether its new patients are service members, civilian employees or family members.

The nine new coronavirus patients reported by U.S. Forces Korea, all service members, arrived on the peninsula between Nov. 3 and 13, according to a USFK news release Thursday.

Eight of those patients flew into Osan Air Base on the Patriot Express, a government-chartered flight from the United States on Nov. 3 and 6, according to USFK. The remaining service member arrived Nov. 13 on a commercial flight at Incheon International Airport.

One tested positive while in quarantine; the others did so on a test required to exit quarantine, according to USFK. All remain quarantined at Camp Humphreys.