Who fired the final salvo of World War II? Depends on who’s calling the shots 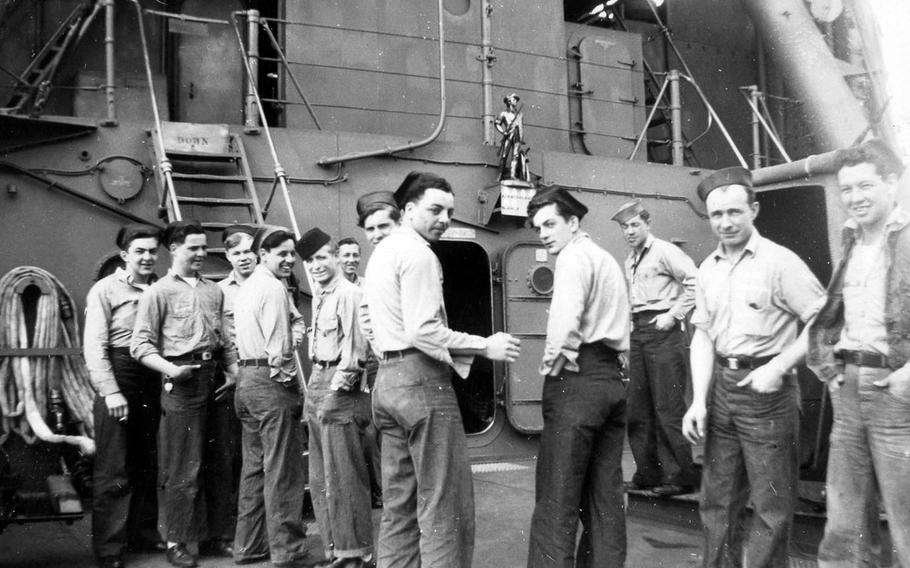 Crewmen of the USS Concord stand on the main deck below a statue of a minuteman mounted on the bulkhead, in this photo taken during the last 15 months of World War II. (Harry Roy Olson and Jenni Olson)

Crewmen of the USS Concord stand on the main deck below a statue of a minuteman mounted on the bulkhead, in this photo taken during the last 15 months of World War II. (Harry Roy Olson and Jenni Olson) 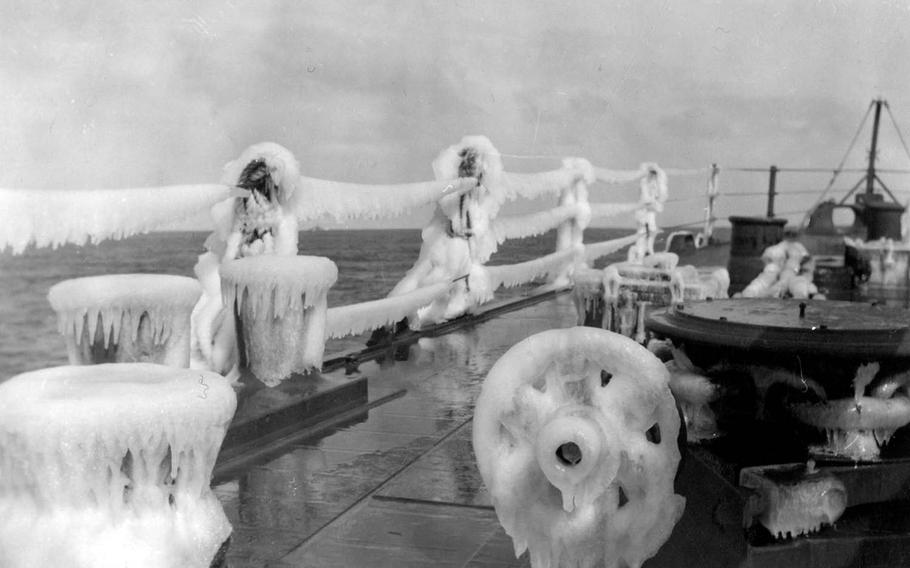 Thick ice coats the bow of the USS Concord during one of the cruiser's numerous missions in the Northern Pacific, in this photo taken sometime between March 1944 and August 1945. (Harry Roy Olson and Jenni Olson) 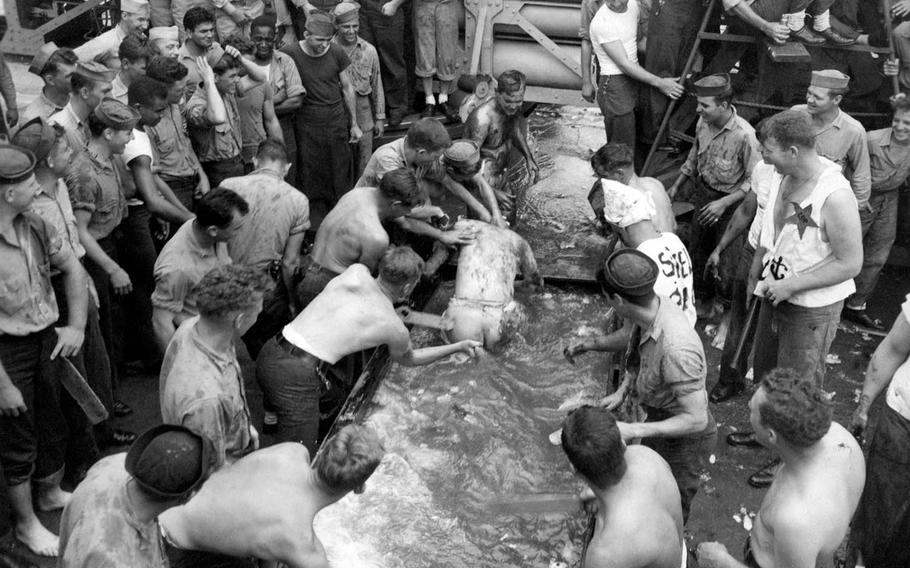 A sailor aboard the USS Concord undergoes a shellback initiation as the ship crosses over the equator in the Pacific Ocean during World War II. (Harry Roy Olson and Jenni Olson) 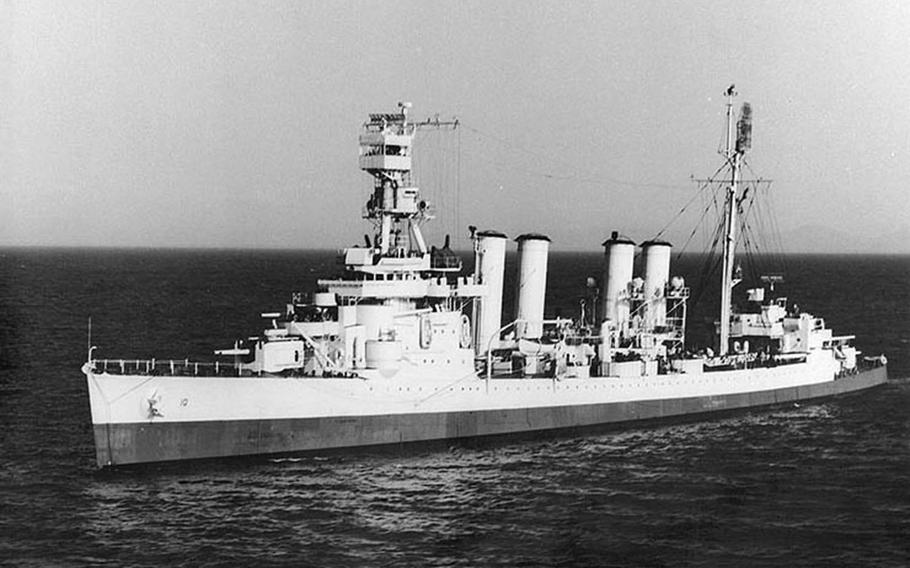 The USS Concord sits in waters off the Panama Canal Zone on March 14, 1944. (U.S. National Archives)

The United States was thrust into World War II abruptly with the Japanese surprise attack on Pearl Harbor, Hawaii, on Dec. 7, 1941.

The Pearl Harbor-based destroyer USS Ward is credited with firing America’s first shot in the war, sinking a Japanese mini-submarine as it attempted to enter the harbor shortly before the main attack began.

But the end of fighting in the Pacific war was not as definitive, with Japan still occupying territory all the way from Manchuria in the north to as far south as New Guinea as of Aug. 15, 1945, when the emperor of Japan announced the country’s surrender and ended the war.

Which U.S. Navy vessel fired the last salvo is less clear, though several ships contend for the title.

“As in almost every case of superlatives, it is often difficult to determine the first or the last for any event or action, because it would require searching and eliminating every other possibility,” Timothy Francis, senior advisory historian at the Naval History and Heritage Command, said in a written response to a Stars and Stripes query about the last Navy ship to fire in the war.

The Concord patrolThe USS Concord, an Omaha-class light cruiser, “probably did” fire the Navy’s last shot against a shore target, Francis said. The crew of the Concord certainly expressed little doubt about the ship’s place in history.

The Concord, named for the New England town famed for the minutemen and the “shot heard ‘round the world” that began the American Revolution, had for much of 1944 and 1945 prowled the northern Pacific as part of a large task force of destroyers and cruisers that fired upon Japanese ships and shoreline.

As Imperial Japan’s ability to defend itself by sea and air diminished, the task force’s assaults grew bolder on the Kuril Islands, a roughly 800-mile-long archipelago running from northern Japan to what was then the Soviet Union.

The Concord’s communication officer, who had survived the sinking of the USS Helena near the Solomon Islands in 1943, held no notions of surviving in the event of abandoning ship in the waters of the Northern Pacific.

“If we were ever to get it up here, I wouldn’t even bother to go over the side,” the officer is quoted in the ship’s official history.

The U.S. had dropped atomic bombs on Hiroshima on Aug. 6 and on Nagasaki on Aug. 9 in 1945, and many, including the crew aboard the Concord, were speculating on whether the Japanese would finally concede defeat after such an onslaught.

On Aug. 12, 1945, the larger task group was divided into three “prowling” patrols, which were to sweep the Kurils and destroy any vessels they encountered. Then, at a predesignated time in the night, the patrols were to commence simultaneous bombardment of three separate islands.

The Concord patrol, however, was delayed in reaching Suribachi Wan for the appointed time of bombardment because it encountered, pursued and sank a six-vessel Japanese trawler group.

The Concord reached that northernmost Kuril island an hour late as a result, by which time the other two patrols were already wrapping up their bombardments.

In an account published in VFW Magazine, crew member Fred A. Lumb recalled the moments after the captain of the Concord ordered the cease-fire. A few minutes later, the guns on all ships bombarding the island fell silent.

“About a minute later,” Lumb wrote, “Lt. Cmdr. Daniel Brand, the gunnery officer, high aloft in forward fire control, saw to it that one more round was fired by the Concord. Probably few who heard that shot really believed it to be a hangfire, but none doubted that it was the last round of the bombardment.”

“It was this final shore bombardment that was the basis of the CONCORD crew’s proud claim that the cruiser fired the last salvo of the war against a shore target — a claim which undoubtedly will long be the subject of mess-hall and wardroom debate,” the ship’s official history states.

Another possibilityThe USS Heermann, a Fletcher-class destroyer, may have possibly shot down the last Japanese airplane of the war on Aug. 16, 1945.

The Heermann had entered service in 1943 and became a wartime legend after it and several other U.S. destroyers took on a far superior Japanese task force during the Battle off Samar in the Philippines in October 1944.

The Heermann was the only destroyer still afloat at battle’s end. It was sailing off the southeast coast of Tokyo on Aug. 15, 1945, when the crew received word that Japan had surrendered, according to an account published by Naval History and Heritage Command.

About an hour after that news, gunners on the destroyer spotted a Yokosuka D4Y Suisei carrier bomber break through the cloud bank. The plane had no bombs or torpedoes attached to it, but it went into a shallow dive just off the Heermann’s port beam, indicating it was possibly a kamikaze suicide run.

The ship’s 5-inch guns hit the plane, which went into a spin and crashed into the sea.

“The dive-bomber may have been one of the last Japanese planes shot down in the war,” the Naval History account said.

But, as Francis notes, fighting continued in Manchuria, China and Southeast Asia for weeks after Aug. 15.