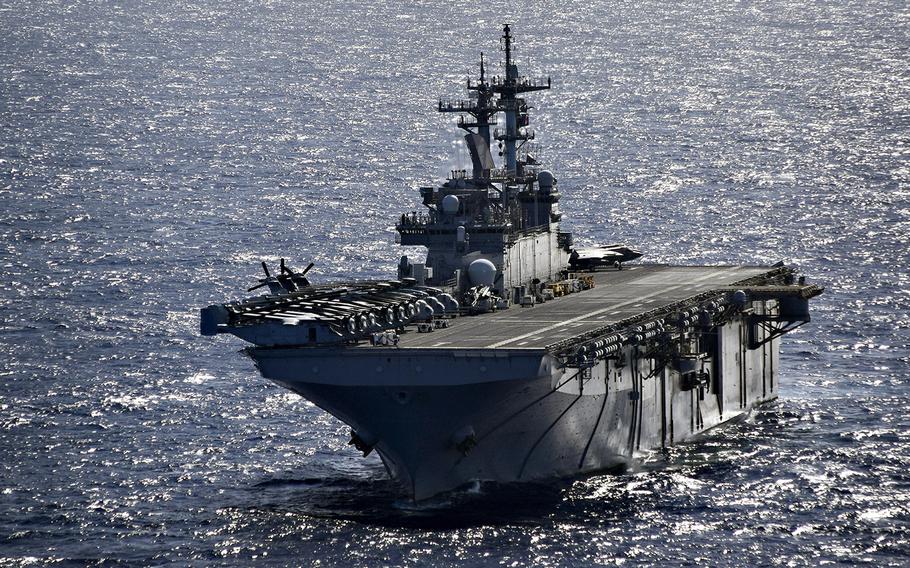 YOKOSUKA NAVAL BASE, Japan — The USS Wasp on Wednesday left the 7th Fleet — its home for more than 1½ years — as it shifts homeports from Sasebo Naval Base in Japan to Naval Station Norfolk, Va., according to a Navy statement.

During its time in the 7th Fleet, the amphibious assault ship made history as the first to deploy with the Marine Corps’ fifth-generation F-35B Lightning II stealth fighter, which is capable of short takeoffs and vertical landings.

The Wasp in January 2018 replaced the USS Bonhomme Richard, which spent six years in Sasebo before returning to the U.S. to reconfigure its flight deck to handle the new stealth fighter.

The F-35B-capable amphibious assault ship USS America, accompanied by the amphibious transport dock USS New Orleans, will replace the Wasp at Sasebo later this year, the Navy announced in April.

Though its time in Sasebo was short, the Wasp participated in major exercises, including Exercise Foal Eagle 2018 with South Korea, Balikatan 2019 with the Philippines and Talisman Sabre 2019, the U.S.- and Australia-led exercise that this year included 34,000 military personnel from the U.S., Australia, Japan, Canada, New Zealand and the United Kingdom off Australia’s east coast.

“What our Wasp Sailors have accomplished here over almost two years, given the operational tempo, and the nature of our multi-pronged mission, is overwhelming, and it’s difficult not to constantly shine with pride,” Wasp Command Master Chief Petty Officer Kevin Guy said in the statement.

Aboard the ship in July during Talisman Sabre, Capt. Jim McGovern, commodore of Amphibious Squadron 11, told reporters he thought the Wasp was “the most capable warship that we have in the United States Navy.” Aside from its warfighting capabilities, the ship also has an onboard hospital.

The Wasp was the leading ship of the squadron, which also includes the transport dock USS Green Bay and the dock landing ship USS Ashland.

“We can branch the full system of operations from humanitarian assistance to combat operations,” McGovern said. “And it’s not just the ship that’s capable of that, it’s the armed team that we have with the 31st [Marine Expeditionary Unit].”

President Donald Trump gave a speech aboard the ship during his May 28 visit to Yokosuka Naval Base.

The ship’s commanding officer, Capt. Gregory Baker, said it was a “profound honor for Wasp and her crew to serve 7th Fleet and its ancillary commands during this time,” according to the Navy statement.

“Our Sailors have embraced the experiences and opportunities available in this part of the world and are more operationally prepared to continue supporting and executing the missions we are presented with,” Baker said in the statement. “I couldn’t have asked for a more dedicated or capable crew.”

Guy said more than half of the Wasp’s crew of about 3,000 were “geo-bachelors” during their time in Japan, leaving their families stateside for the 21 months the ship operated under the 7th Fleet,” according to the Navy statement.

“When you consider that we have a large number of sailors thousands of miles away from their families and friends — their level of dedication under these circumstances truly exemplifies the Navy Core Values of Honor, Courage, and Commitment,” Guy said in the statement.

During a March 20 interview, McGovern said the ship was “well-run” thanks to its crew.

“If you want to look at toughness,” McGovern said,” look no further than this crew.”