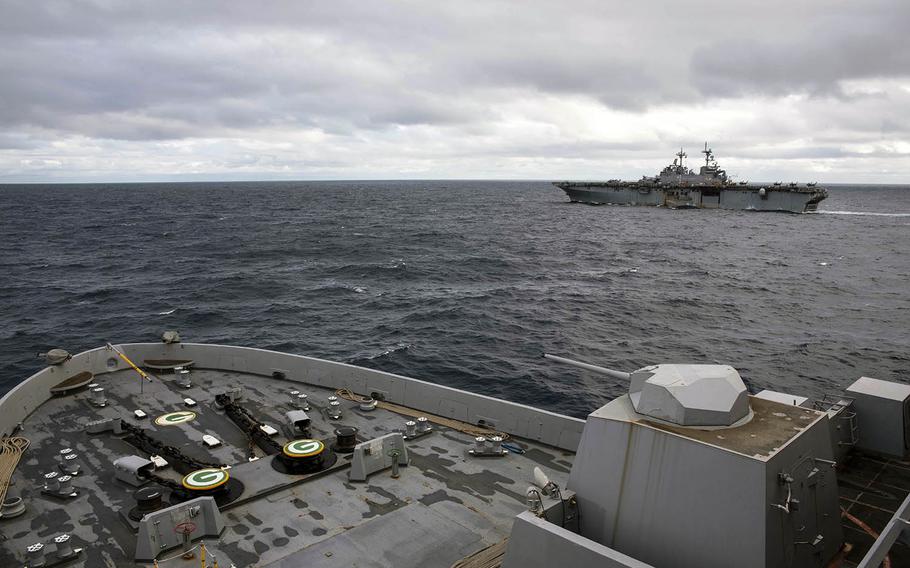 The USS Wasp recently spent two days sailing with a Japanese amphibious ship in the East China Sea to test their ability to communicate and maneuver together.

The East China Sea is home to the uninhabited Senkaku islands, which have long been a point of contention between Japan and China. The resource-rich chain between Okinawa and Taiwan are claimed by Japan, Taiwan and China, which refers to them as Diaoyu.

During the event, Capt. Jim McGovern, the squadron’s commodore, also toured the Kunisaki and met with its crew, according to the statement.

“It was a great opportunity to visit Kunisaki and see in person how well she and the ships of Wasp [Amphibious Ready Group] can operate together,” he said. “Our ability to work and train together with our JMSDF partners is a key enabler that ensures security and stability in the Indo-Pacific Region.”

The exercise follows mobilization of China’s DF-26, an anti-ship ballistic missile, after a freedom-of-navigation mission by the guided-missile destroyer USS McCampbell on Jan. 7 near the Paracel Islands in the neighboring South China Sea.

Chief of Naval Operations Adm. John Richardson visited China from Jan. 13-16 to express the importance of “professional interaction at sea” amid the growing tensions and met with Vice Adm. Shen Jinlong, commander of the People’s Liberation Army Navy, according to a Navy statement released Tuesday.

“The U.S. Navy will continue to conduct routine and lawful operations around the world, in order to protect the rights, freedoms and lawful uses of sea and airspace guaranteed to all,” Richardson said in the statement. “This will not change. Enhancing the prosperity of all is the direct result of a secure and orderly maritime domain.”