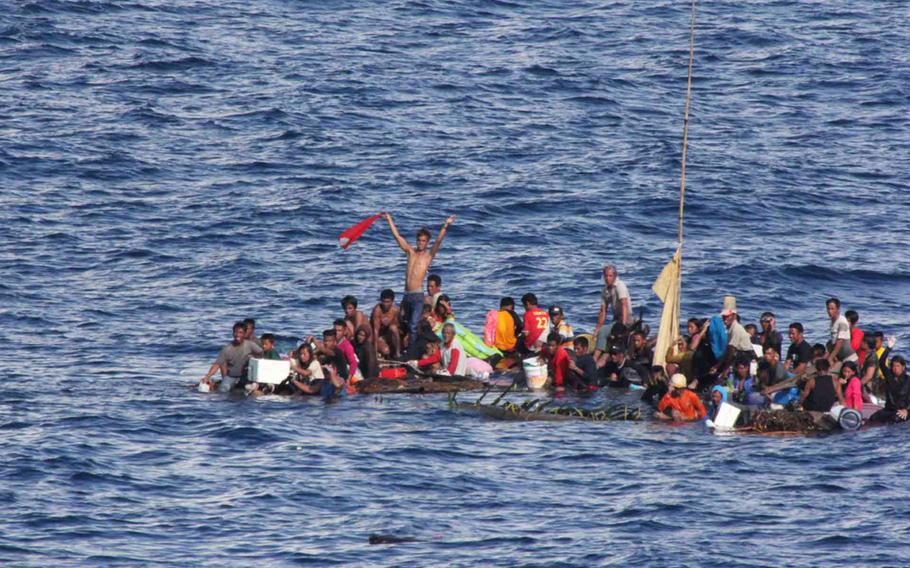 A group of 65 people floats on a bamboo raft in the Makassar Strait, off Indonesia, while crewmembers aboard the amphibious dock landing ship USS Rushmore prepare a rescue on June 10, 2015. (Emmanuel Ramos/U.S. Marine Corps)

A group of 65 people floats on a bamboo raft in the Makassar Strait, off Indonesia, while crewmembers aboard the amphibious dock landing ship USS Rushmore prepare a rescue on June 10, 2015. (Emmanuel Ramos/U.S. Marine Corps) 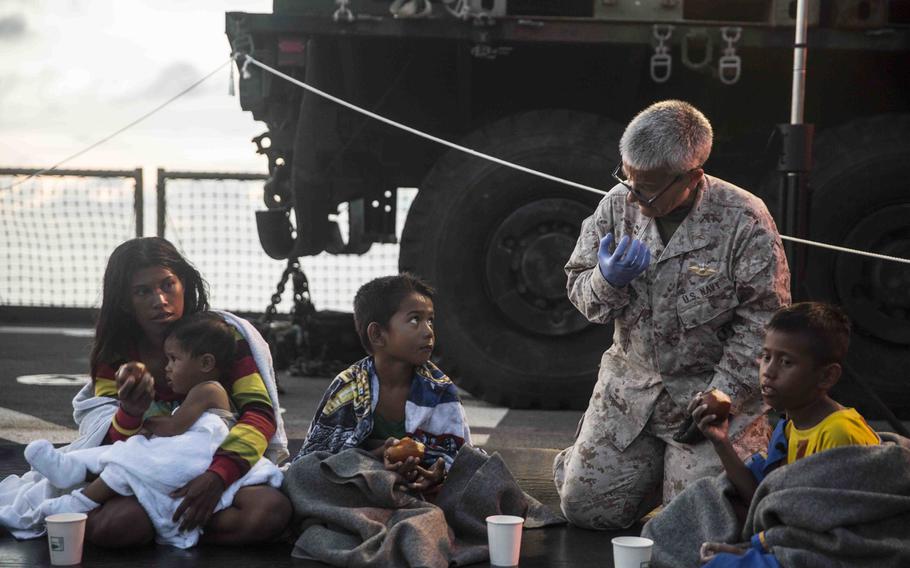 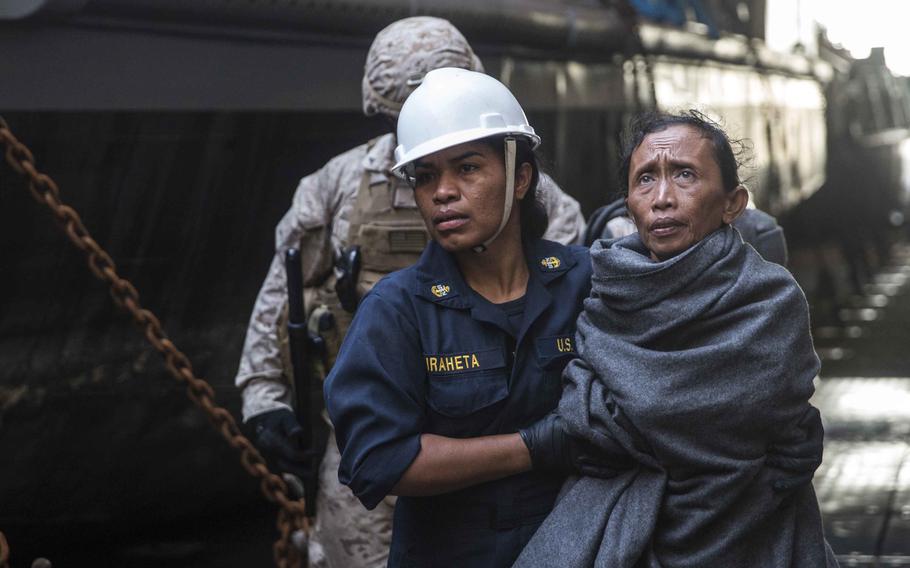 A sailor takes a woman to get medical care aboard the amphibious dock landing ship USS Rushmore on June 10, 2015. (Emmanuel Ramos/U.S. Marine Corps) Cpl. Jennifer Ko gives an apple to a child aboard the amphibious dock landing ship USS Rushmore on June 11, 2015, after the child was rescued a day earlier from a bamboo raft adrift in the Makassar Strait, off Indonesia. (Emmanuel Ramos/U.S. Marine Corps)

YOKOHAMA, Japan — The 65 people adrift on a barely floating raft were out of food, out of water and 70 miles from the Indonesian coast when crewmembers aboard the amphibious dock landing ship USS Rushmore spotted and rescued them Wednesday, officials aboard the ship said.

The San Diego-based Rushmore had just pulled out of an Indonesian port and was sailing through the Makassar Strait, between Borneo and Sulawesi, on a typically hot morning, Navy and Marine officials said from aboard Rushmore and USS Essex on Friday.

Distress calls aren’t routine but aren’t uncommon in such places, but they typically come over the radio from boats.

The makeshift raft had no radio, no propulsion and no signal flares. All the people on the raft could do was wave their shirts. From about 5 miles away, a Rushmore crewman saw them.

“It was good, old-fashioned Navy watch-standing,” said Capt. Clint Carroll, commander of Amphibious Squadron 3. “They had their eyes and ears open; they were looking out and spotted them.”

The crew alerted Rushmore commanding officer Cmdr. Thomas Stephens, who ordered the ship in for a closer look.

As the ship closed in, Stephens contacted Carroll aboard Essex, which had just gotten underway in Hong Kong. With Carroll and higher headquarters in Japan listening in, Stephens described the scene.

“There was a lot of trash and junk breaking off on this raft, and in the end we realized the raft was 80 percent underwater,” Stephens said.

Some of the people were hanging off the raft and one appeared in danger of drowning.

Stephens ordered two rigid-hulled inflatable boats to the scene. While one might have done the job, Stephens wanted to avoid panic from anyone worried that the boat wouldn’t come back for them.

The sailors and embarked Marines brought them all aboard, completed security checks and then concentrated on medical care. The rescued group included 12 children and four pregnant women. Most of the group suffered from dehydration and minor wounds, but nothing life-threatening.

The next major task was learning how the survivors ended up there in the first place.

Human smuggling operations involving people fleeing for economic and political reasons are common in the region. Recently, thousands of Rohingya, a minority group living in Myanmar but not recognized by the government, have attempted to escape persecution on unstable boats.

Fortunately, a crewmember aboard Rushmore was able to communicate with the group through a related Indonesian dialect and a lot of hand gesturing.

The 65 people were Indonesian citizens who had boarded a ferry from Borneo to Sulawesi, they said. The ferry capsized and survivors lashed together whatever they found that floated, according to their account.

Col. Vance Cryer, commander of the 15th Marine Expeditionary Unit, is on his 6th MEU deployment with the Navy and said that each of them included helping someone in distress.

“But this was exceptional, to have this many people in this dire a situation on the high seas,” Cryer said.

Once the survivors were aboard, the crew did their best to make them comfortable. Some gave away shoes and shirts to adults; children received teddy bears and soccer balls, among other things.

“Many aboard weren’t directly involved but became involved,” Stephens said. “It helped many sailors and Marines appreciate what they have.”

The next day, the survivors were turned over to the Indonesian coast guard. Rushmore and Essex have resumed course toward the Arabian Sea.