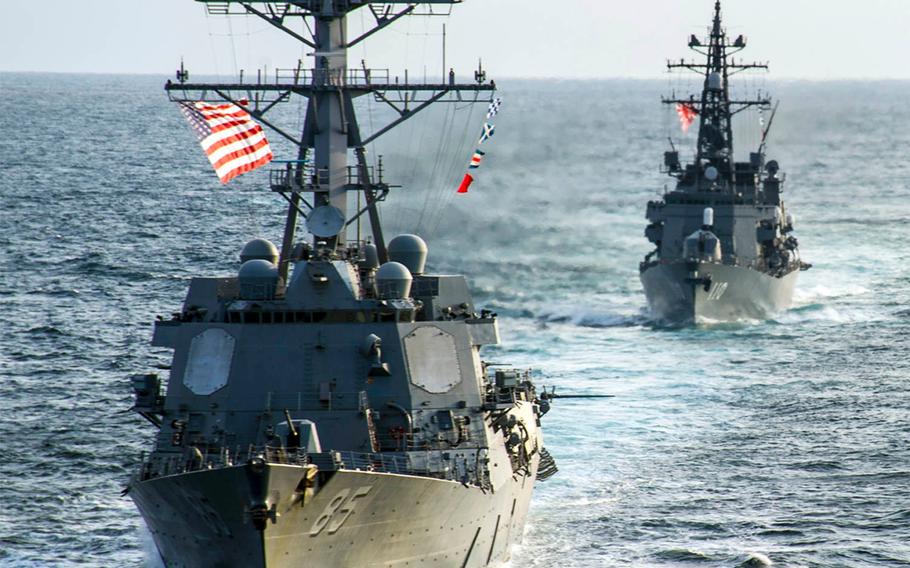 The guided-missile destroyer USS McCampbell, left, and the JMSDF destroyer Takanami sail together in the Pacific Ocean on March 9, 2014. (Chris Cavagnaro/U.S. Navy)

The 7th Fleet's guided-missile destroyer USS McCampbell is returning to the United States and a new homeport after 13 years at Yokosuka Naval Base, Japan, the Navy announced Saturday.

“McCampbell has been a workhorse for the theater commanders ensuring a free and open Indo-Pacific,” the Navy quoted Capt. Steven DeMoss, commander of Destroyer Squadron 15, as saying. “In particular, this last year the crew spent more days at sea than any other ship in theater.”

The McCampbell left Yokosuka, home of the 7th Fleet, 20 years to the day it was christened, according to the Navy. It’s bound for Portland, Ore., and a midlife modernization, including maintenance and upgrades. Afterwards, the McCampbell is expected to steam for Naval Station Everett, Wash., where it will join the 3rd Fleet, according to the Navy.

“It has been an honor and privilege for the McCampbell crew to serve alongside the advanced warfighters in the most challenging operational environment,” the Navy quoted the McCampbell’s commanding officer, Cmdr. Patrick Sullivan, as saying. “We are very appreciative for all of the support for McCampbell and our families during the last 13 years.”

The warship marked an eventful stay in the Western Pacific, a global arena where the U.S. sends the Navy to display its intention to keep sea lanes open as China asserts its naval muscle.

The McCampbell steamed several times past the Paracel Islands, an archipelago in the South China Sea with overlapping claims by several neighboring countries, including China. The destroyer likewise steamed through the Taiwan Strait, most recently in May, an exercise by U.S. ships that typically draws a rebuke from China.

The McCampbell also took part in disaster relief efforts in the wake of a 2008 earthquake and tsunami off the coast of Sulawesi, Indonesia, and in 2011 in Operation Tomodachi, the humanitarian relief following a devastating earthquake and tsunami in northeastern Japan. In 2012, the ship rescued five Filipino fishermen whose boat capsized off the Philippine coast, according to the Navy.

During its stay in Japan, the McCampbell and its crew were part of Destroyer Squadron 15, the 7th Fleet’s “principal surface force,” the Navy stated. The vessel arrived at Yokosuka in July 2007 as part of the strike group attached to the aircraft carrier USS Kitty Hawk.