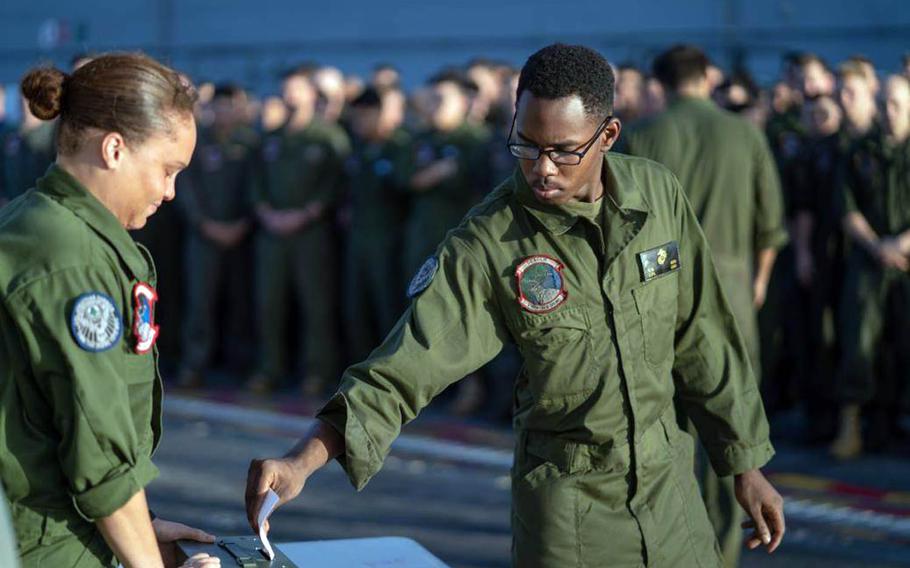 In a photo posted to Facebook on Tuesday, Feb. 12, 2019, a Marine aboard the USS Essex places a message into an ammunition box for Cpl. Jonathan Currier, who was lost in the Sulu Sea in August. (U.S. Marine Corps photo)

As the USS Essex sailed recently through the Sulu Sea, Marines and sailors on board solemnly paid tribute to one of their own who went overboard in the same body of water in August, the 13th Marine Expeditionary Unit said in a Facebook post Tuesday.

Cpl. Jonathan Currier, 21, of New Hampshire, went missing near the Philippines the morning of Aug. 9, prompting a “Marine overboard” call on the amphibious assault ship, a 13th MEU statement said at the time.

The Marines, Navy, Coast Guard and Philippine vessels then looked for Currier through more than 13,000 square nautical miles and more than 300 flight hours before the search ended Aug. 13, according to the statement. He was declared dead Aug. 17.

Marines at the onboard memorial ceremony this week placed personal notes to Currier into an ammunition box that was later dropped into the sea, according to the Facebook post. Photos from the service show sailors and Marines standing side by side, their heads bowed in reverence for the missing corporal.

Currier was a CH-53E Super Stallion helicopter crew chief who enlisted in 2015, the 13th MEU said in August. At the time of his disappearance, he was deployed with Marine Medium Tiltrotor Squadron 166 Reinforced with the 13th MEU on the Essex.

A Super Stallion served as the backdrop to the memorial service on the deck of the Essex, according to photos from the event.

Marine Medium Tiltrotor Squadron 166 commander Lt. Col. Charles Bodwell thanked Marines and sailors at the ceremony for their exemplary work done in Currier’s honor, according to the 13th MEU post.

“Cpl. Currier was a quiet professional who loved being part of our team and always accomplished the mission at hand,” Bodwell said, according to 13th MEU. “I challenged you to finish this deployment in his image, and you did.”

Currier attended boot camp at Marine Corps Recruit Depot Parris Island, later graduating from the School of Infantry at Camp Lejeune, N.C.; the Aviation and A&C School in Pensacola, Fla.; and the Center for Naval Aviation Training in Jacksonville, N.C.

Currier was later assigned to Marine Heavy Helicopter Squadron 361 at Marine Corps Air Station Miramar, Calif., the statement said. His awards include the National Defense Service Medal and Global War on Terrorism Service Medal, according to the statement.

At the time of Currier’s disappearance, Col. Chandler Nelms, 13th Marine Expeditionary Force commander, said in a statement that the corporal’s “loss is felt by our entire [Amphibious Ready Group/MEU] family.”

“He will not be forgotten,” Nelms said in the statement.