USS Dewey sails near Mischief Reef in challenge to China 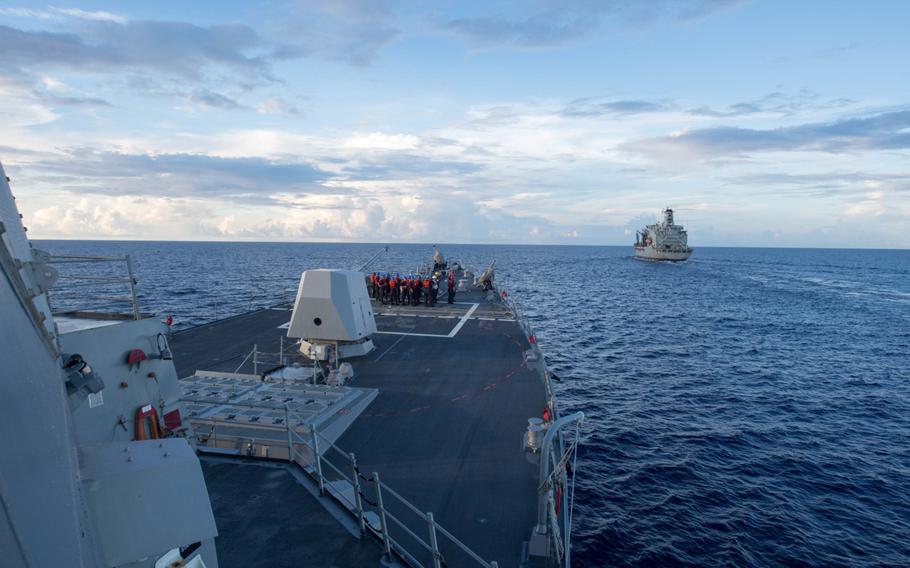 The destroyer USS Dewey shown here during a supply replenishment on May 19 in the South China Sea, sailed within 12 nautical miles of Mischief Reef, a China-occupied territory, as part of the first freedom-of-navigation operation undertaken under the Trump administration. (Kryzentia Weiermann/U.S. Navy photo)

The USS Dewey conducted a freedom-of-navigation operation on Wednesday within 12 nautical miles of Mischief Reef, which is part of the Spratly Island chain, according to a CNN report that cited an unnamed U.S. official.

The ship has been patrolling the South China Sea since at least May 5, according to photos posted on the Navy’s official website.

China asserts a territorial claim around Mischief Reef and all of the Spratly Islands, despite competing claims from several neighboring countries.

Although islands generate a 12-nautical mile territorial water zone, most international maritime law experts consider Mischief Reef a low-tide elevation with artificial construction, which would generate at most a 500-meter safety zone.

Pentagon spokesman Maj. Jamie Davis declined to confirm the operation, saying in a written statement that operational summaries will be released publicly in an annual report “and not sooner.”

“We are continuing regular [freedom-of-navigation operations], as we have routinely done in the past and will continue to do in the future,” Davis wrote. “We have a comprehensive Freedom of Navigation Operations program that seeks to challenge excessive maritime claims in order to preserve the rights, freedoms and uses of the sea and airspace guaranteed to all nations under international law.”

The last freedom-of-navigation operation in the South China Sea took place in October, when the destroyer USS Decatur sailed near the disputed Paracel Islands.

Some China watchers had wondered if the Trump administration had decided to curtail freedom-of-navigation operations near islands claimed by China. Trump had talked of taking a tougher stance with China during the presidential campaign, but since taking office has seemed more interested in finding common ground for making a trade deal than rattling sabers over the South China Sea.

Earlier this month, Adm. Scott Swift, U.S. Pacific Fleet commander, told reporters in Singapore that the South China Sea issue was not a lower priority for the new administration.

“We just went through a change in administration,” he said. “I am not surprised that process has continued in a dialogue as the new administration gets its feet on the ground and determines where would be appropriate to take advantage of these opportunities and where we may want to wait.”

The U.S. asserts no claim over any South China Sea island, but it did support the Philippines when in 2013 it sought a ruling by the Permanent Court of Arbitration in The Hague.

Last year, the tribunal announced that China’s claim of historical rights to the disputed islands was without merit.

China said it would not abide by the decision.