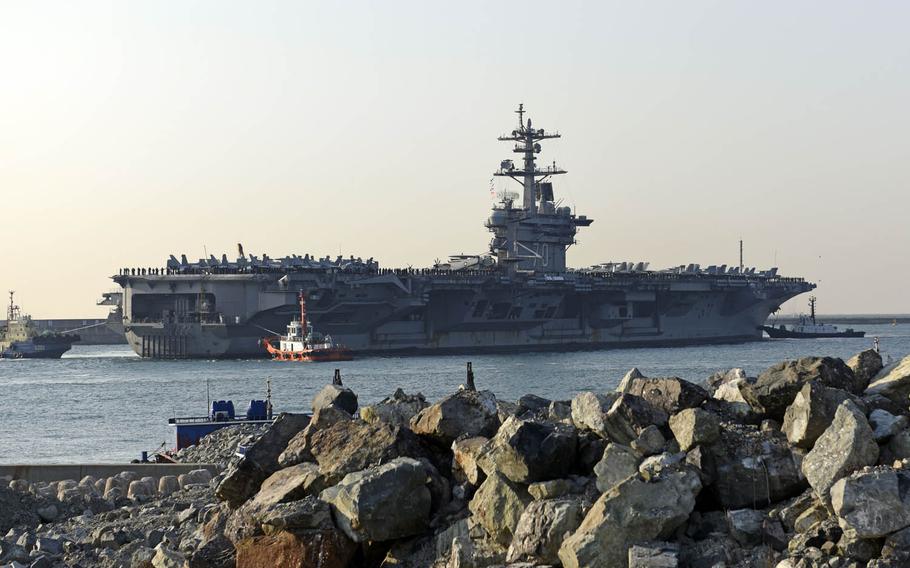 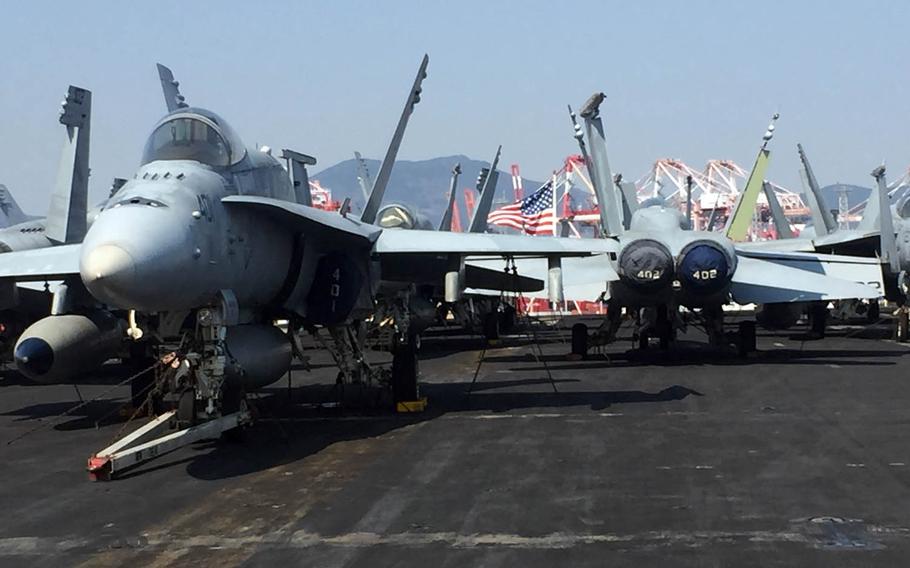 Buy Photo
An American flag flutters behind an F/A-18 Hornet on the flight deck of the USS Carl Vinson, Wednesday, March 15, 2017. The nuclear-powered aircraft carrier made a port call to Busan, South Korea. (Kim Gamel/Stars and Stripes)

BUSAN, South Korea — The aircraft carrier USS Carl Vinson made a port call in South Korea on Wednesday, while allied military leaders warned the North may stage a provocation during the allies’ joint war games.

The chairman of the U.S. Joint Chiefs of Staff, Gen. Joseph Dunford, also offered reassurances of Washington’s commitment to the alliance amid concerns about a political crisis over the ouster of South Korea’s president. The caretaker government announced Wednesday that new elections will be held on May 9, as required by the constitution.

“The [South Korea]-U.S. Alliance is ironclad, and the combined defense posture is firm regardless of the political situation in Korea,” Dunford said in a statement after discussing the situation with his South Korean counterpart, Gen. Lee Sun-jin, Wednesday in a phone call.

The military chiefs also “recognized the possibility that North Korea could conduct provocative actions during the Key Resolve/Foal Eagle exercise, or in connection with North Korean major political events in April,” the statement said.

As usual, North Korea has strongly denounced the annual military drills, which it considers a rehearsal for an invasion. It also criticized the Carl Vinson’s participation, warning it would stage “merciless ultra-precision strikes” if the aircraft carrier violates its sovereignty.

But its belligerent rhetoric has taken on added significance after more than a year of stepped-up North Korean missile tests and two underground nuclear explosions. The North fired four ballistic missiles into the sea off Japan on March 6, days after Foal Eagle began.

The Nimitz-class carrier, with about 5,500 crewmembers, has been operating in waters off the divided peninsula as part of Foal Eagle. The guided-missile destroyer USS Wayne E. Meyer also pulled into Busan on Wednesday.

The carrier strike group’s commander, Rear Adm. James Kilby, told reporters in Busan that the U.S. understands the threat to South Korea “is increasing with every act of aggression” from the North and stressed the ship’s presence “is a clear signal of our commitment to the Republic of Korea.”

The Carl Vinson Carrier Strike Group was recently forward deployed as part of the Navy’s plan to shift 3rd Fleet forces to the Western Pacific. The group left San Diego on Jan. 5 and arrived in the South China Sea last month.

The ship, which was launched in 1980, has assisted with military and humanitarian operations around the world. But it is perhaps most famous for transporting the remains of slain terror leader Osama bin Laden for a burial at sea.

The carrier is named for the late congressman Carl Vinson, who spearheaded the landmark Vinson-Trammel Act that provided authority for the eventual construction of 92 major warships.

The U.S. has about 28,500 servicemembers stationed in South Korea and sends more from off the peninsula to participate in the annual exercises.

The two Koreas, which are separated by the world’s most fortified border, remain technically at war after the 1950-53 conflict ended in an armistice instead of a peace treaty.