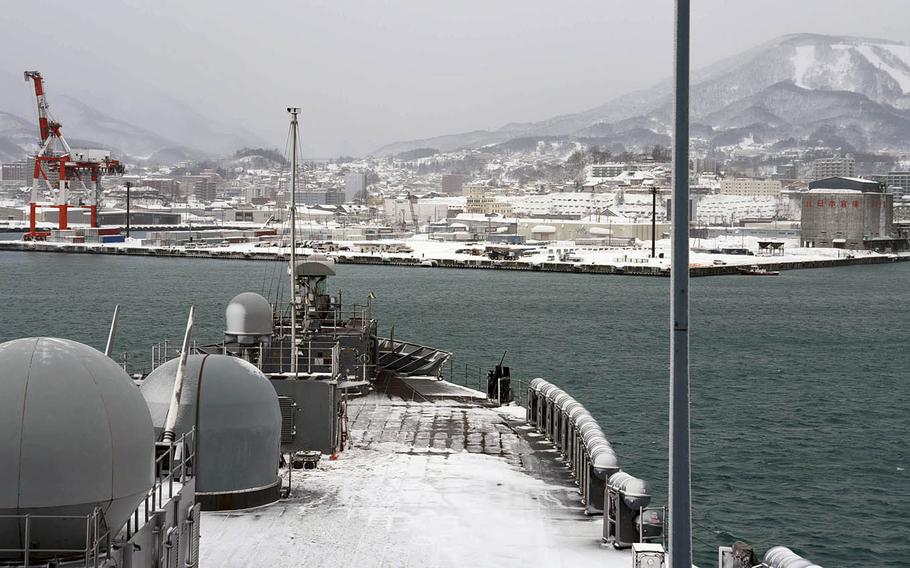 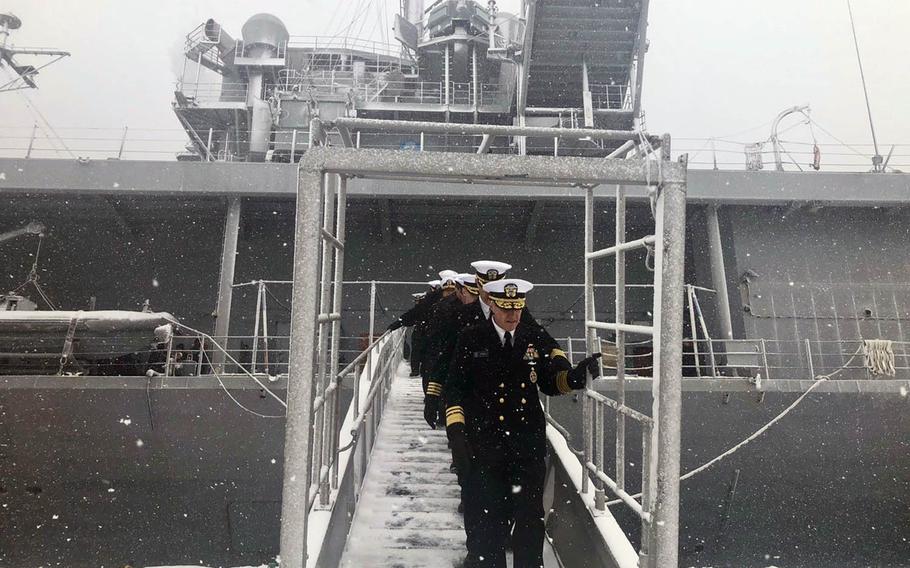 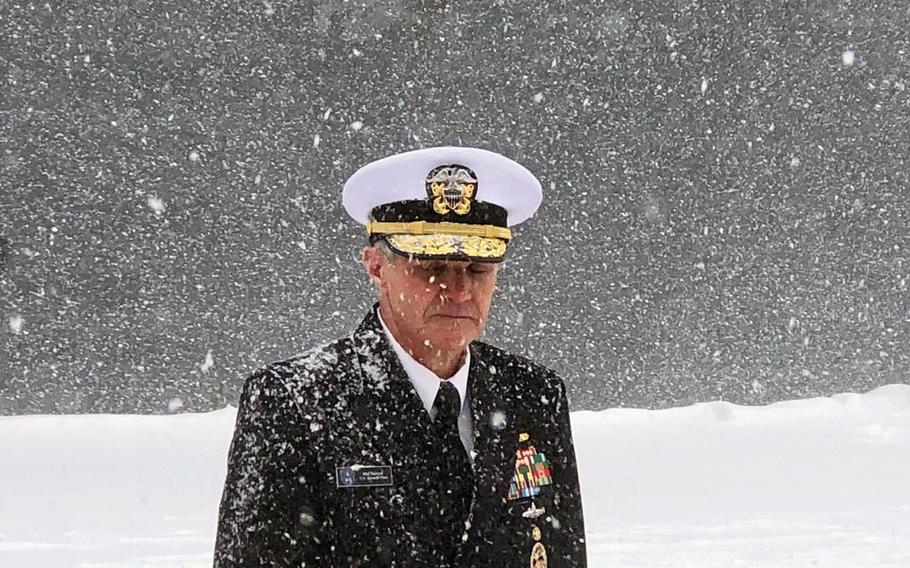 Vice Adm. Phil Sawyer, commander of the U.S. 7th Fleet, stands during a welcoming ceremony for the USS Blue Ridge during a port visit at Otaru, Japan, on Friday, Feb. 8, 2019. (Caitlin Doornbos/Stars and Stripes) 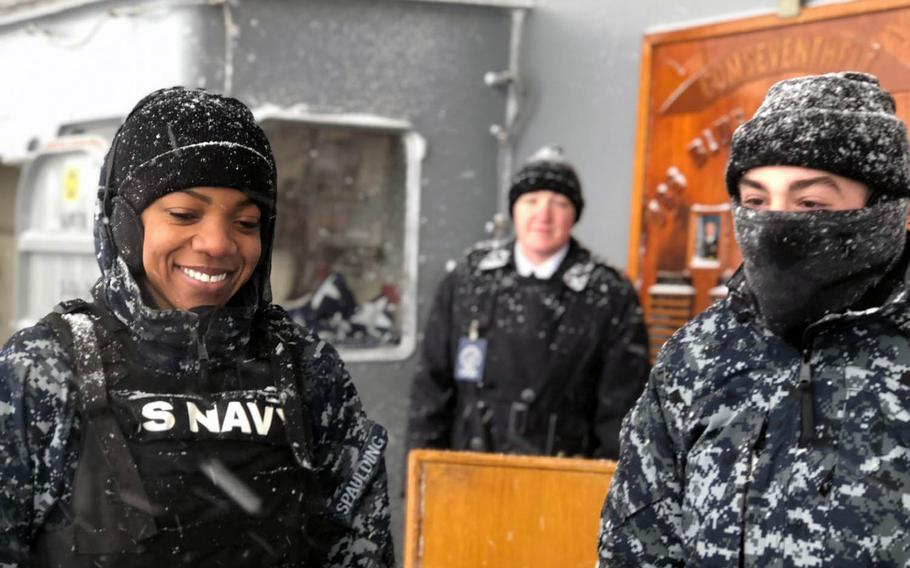 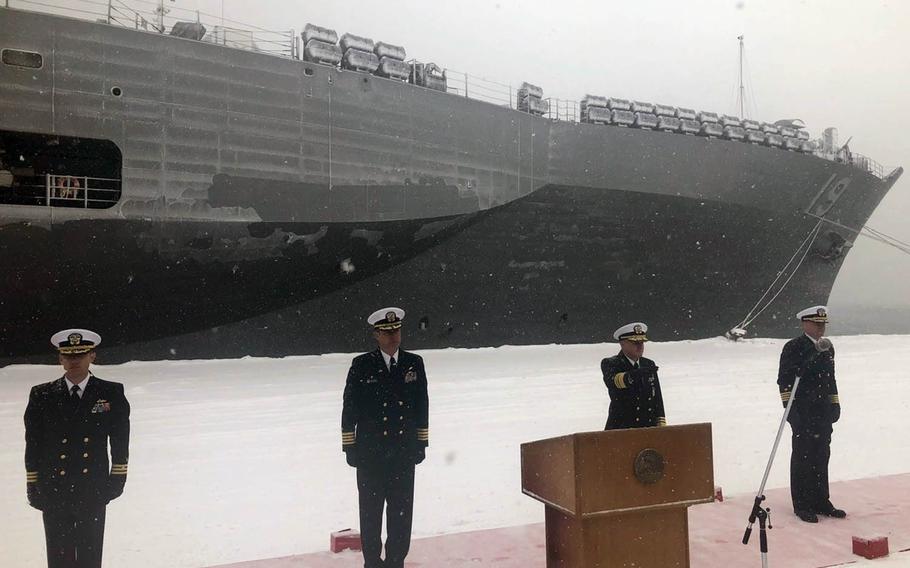 Officers of the U.S. 7th Fleet and USS Blue Ridge line up for a welcoming ceremony during a port call in Otaru, Japan, on Friday, Feb. 8, 2019. (Caitlin Doornbos/Stars and Stripes) 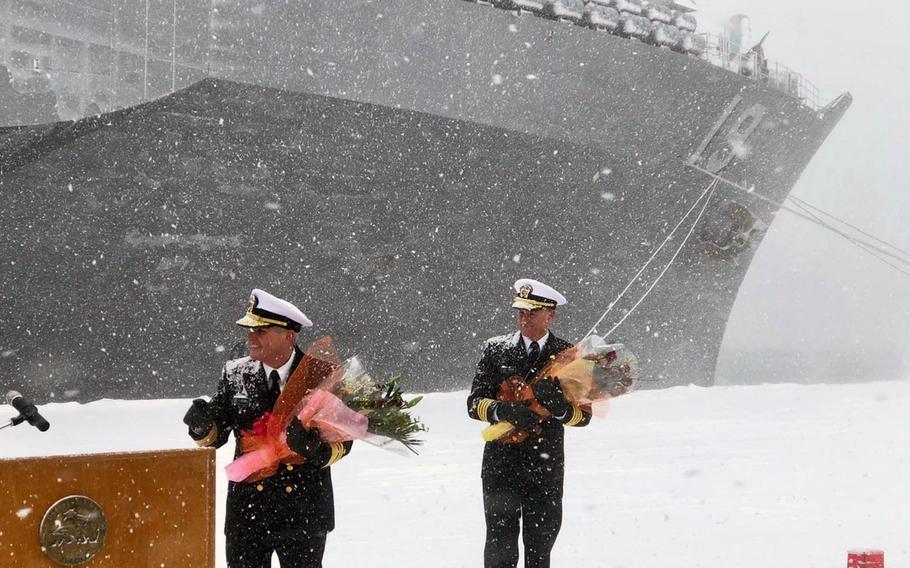 ABOARD THE USS BLUE RIDGE in Otaru, Japan — Quarter-sized snowflakes pummeled the USS Blue Ridge on Friday as the Navy’s oldest operational ship pulled into this city for its first time in nearly five years.

Snow piled on the shoulders of the ship’s leadership during a morning ceremony. The hulking, gray flagship of the U.S. 7th Fleet behind them stuck out against the blizzard-white sky and snow-packed pier.

Hokkaido businessman Yoshiro Ito of the Japan Defense Cooperative Association welcomed 7th Fleet commander Vice Adm. Phil Sawyer and his staff to Otaru during an outdoor welcoming ceremony on the snowy pier Friday morning. A crowd of about 75 shivering onlookers gath-ered to hear his short speech.

“It is very unusual to have the 7th Fleet admiral visit Hokkaido,” Ito said. “I’m so happy to show you winter.”

The Navy regularly sends sailors to Hokkaido, the northernmost of the four main islands of Japan, to participate in winter festivals.

On Sunday, the USS Antietam stopped in nearby Ishikari for the 70th annual Sapporo Snow Festival, according to a Navy statement. And last week, a team of 11 sailors from Misawa Naval Air Facility created a snow carving in Sapporo for the festival.

The Blue Ridge, a nearly 19,000-ton warship, was commissioned in 1970 as a central planning vessel for fleet leaders, according to the Navy. The 6th Fleet uses the Blue Ridge’s sister ship USS Mount Whitney in a similar fashion.

“Our biggest upgrade is what’s called CANES — the Consolidated Afloat Network Enterprise,” Anduze said. “It’s a computer system that provides the commander with a much more modern electronic communications suite and computer suite.”

Anduze said some mechanical upgrades were also made, noting that “it’s a 1970 ship … a lot of things needed to be updated and reworked.”

“We have boiler technicians and we have network operators all still on the same ship fulfilling one mission, which is supporting 7th Fleet staff and the commander in doing his job,” Anduze said. “So, it’s the old and the new all working together to make sure that we provide the capabili-ties necessary.”

The port visit affords the crew of about 1,000 a chance to relax, interact with the local community and attend several events taking place this week in the region, including the Sapporo Snow Festival and Otaru Snow Light Path Festival.

“We’ve been looking forward to coming up here for several months now, and it didn’t disappoint,” Anduze said. “Snowboarding, the festivals, the food — everybody’s very excited about this area in the northern part of Japan.”

At the welcoming ceremony, Sawyer told an audience of Japanese leaders, Japan Self-Defense Force servicemembers and media that the stop in Otaru was special for the Blue Ridge and 7th Fleet staffs.

“While we call Yokosuka home and work with the [Japan Maritime Self-Defense Force] throughout the year, opportunities to visit this part of Japan are rare and we truly appreciate Ota-ru’s hospitality,” Sawyer said.

Not everyone in Otaru was welcoming. Anduze said he heard some Hokkaido residents protest-ing the Blue Ridge’s arrival Friday morning. A Japanese journalist told Anduze during an on-board press conference that some citizens were concerned the Blue Ridge was carrying nuclear weapons, to which Anduze replied that the ship is not.

During their remaining time in Otaru, Blue Ridge sailors will participate in several community engagement events, playing basketball with Otaru high school students and volunteering at the snow light path festival, according to a Navy statement.

The Navy said in its statement that such events “build on the longstanding friendship between American and Japanese citizens.”

It is unclear how long the ship will remain in Otaru, as the Navy does not discuss future move-ments.