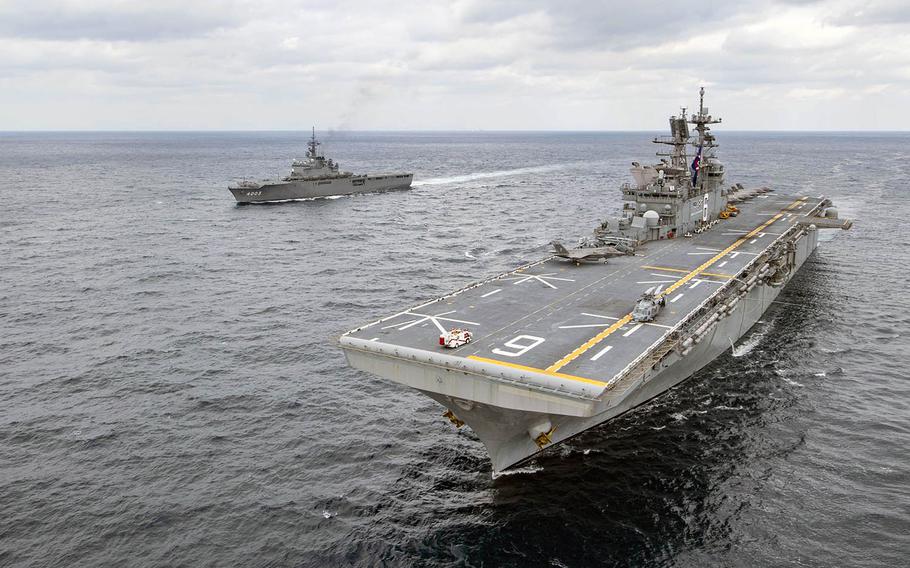 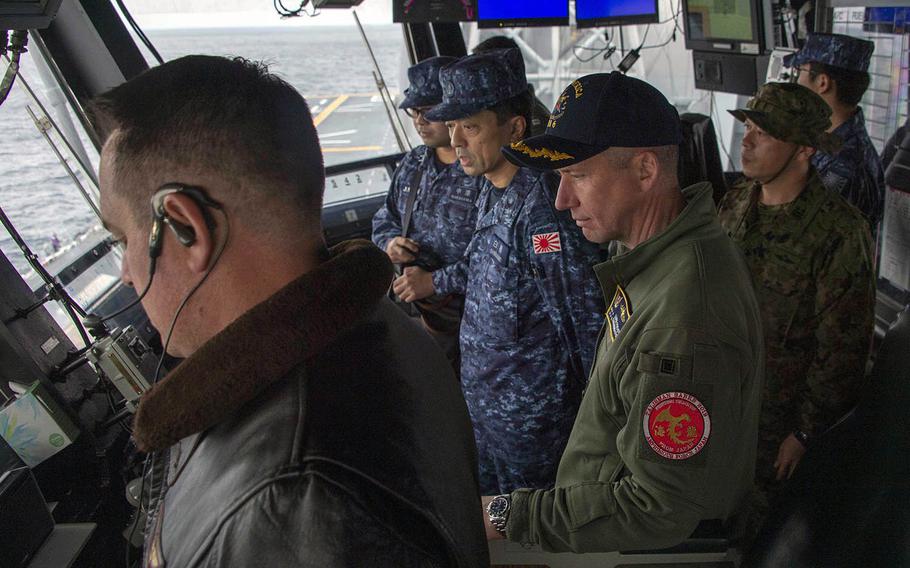 Still a relative newcomer to its homeport in Japan, the amphibious assault ship USS America joined up in the East China Sea with the Japan Maritime Self-Defense Force for training exercises Monday, according to the U.S. Navy.

The 844-foot America, home-ported at Sasebo Naval Base, and the amphibious transport dock ship JS Kunisaki, home-ported at Kure Naval Base in Hiroshima, exchanged personnel, maneuvered together and held communication drills and flight demonstrations, according to a Navy news release. The daylong exercise was the first for the America, the flagship of an expeditionary strike group, since it arrived Dec. 6 at Sasebo.

“We are extremely pleased with this first opportunity for USS America to operate side-by-side with our JMSDF allies,” Rear Adm. Fred Kacher, commander of Expeditionary Strike Group 7, said in a Navy statement. “This exercise allows us to build on our already strong relationship and helps to underscore our commitment to this incredibly important partnership and region.”

The western Pacific has become an arena for global competition as China seeks to control the seas that border its shores. The U.S. has partnered with its regional allies in similar exercises to demonstrate their resolve to resist Chinese expansion.

The East China Sea, encompassed by China, Taiwan, Japan and South Korea, is one setting for those demonstrations. Japan and China, for example, have competing claims to a barren group of small islands, the Senkakus, called the Diaoyu by China, that lie over potential gas and oil deposits.

During the exercise, JMSDF Rear Adm. Shirane Tsutomu, commander of the Mine Warfare Force, came aboard the America to meet the strike group leaders and acquaint himself with the ship’s capabilities, according to the Navy.

“There is no better partner than the Japan Maritime Self-Defense Force. Our sailors and Marines enjoyed the opportunity to work with this first-rate team of professionals,” Capt. Luke Frost, USS America’s commanding officer, said in the statement. “We are proud to be part of Forward Deployed Naval Forces and inherit the legacy of this critical alliance for the peace and prosperity of the Indo-Pacific.”

The America’s new design expands the Navy’s aviation capabilities in the Indo-Pacific region. Commissioned in 2014, the warship comes with a larger hangar bay instead of a well deck, which means it’s able to maximize the capabilities of the F-35B stealth fighter. With its near 1,000 core crew and ability to embark 1,700 Marines, the America also has 30% more storage space, allowing the ship to carry 250% more aviation fuel than the traditional flat-deck ship.

Aside from the F-35Bs and the MV-22 Osprey tilt-rotor aircraft, the ship also carries several helicopters: AH-1Z Viper attack helicopters, a CH-53K Super Stallion and the MH-60S Knighthawk.

A sister ship to the America, the future USS Tripoli, is expected to come into service in May as the Navy’s second helicopter assault platform. Its original commissioning date in 2019 was delayed by shipbuilder Huntington Ingalls Industries.