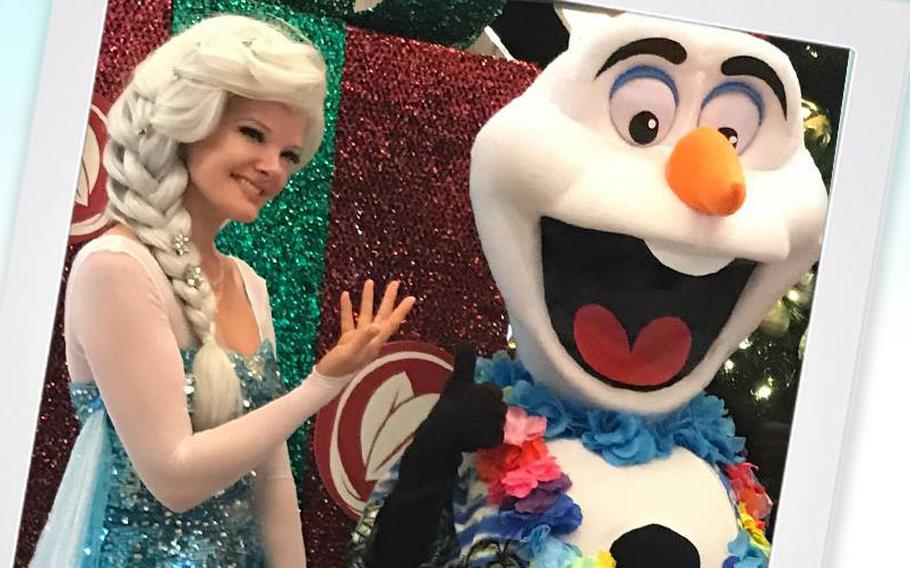 Among USO Hawaii's Holidays for Heroes offerings in December is a breakfast featuring characters from Disney's "Frozen." (Courtesy of USO Hawaii)

FORT SHAFTER, Hawaii — USO Hawaii will host events on Oahu throughout December to bring a bit of extra cheer to servicemembers separated from friends and family during the holiday season.

Holidays for Heroes is intended to bring “a touch of home” to soldiers, Marines, airmen and sailors serving in Hawaii, the most far-flung of the 50 states, said Alesha Burkeen, a USO Hawaii spokeswoman.

“We know how hard it can be for our servicemembers stationed overseas to be separated from family during the holidays," she said. "And we’ve made it our mission to bring as much holiday joy as we can to them with events, food and gifts to those not going home this year."

This is the first time USO Hawaii has participated in the annual Holidays for Heroes program, which began as an effort to deliver gifts to servicemembers downrange at remote locations throughout the Middle East.

Among the scheduled free events are a water park excursion, breakfast with Disney characters, contests, organized sports games and a Christmas Day dinner.

All active-duty, retired and reserve military and their dependents are invited for a free day at the park, which will be closed to the public for the event. Valid military ID must be presented for all guests ages 11 and older.

Parking is $8 per car, and no outside food or beverages, except for water, are allowed. Snacks and meals are available for purchase at the park.

Nonmilitary, nondependent guests may attend if sponsored by military personnel and are required to pay an admission fee of $29.99.

For families with young children, a special pancake breakfast attended by characters from Disney's "Frozen" will be served Dec. 15 at USO Schofield Barracks. Kid-friendly activities, including crafts, will also be offered during the event.

On Dec. 18, the Kris Kringle Kickball Klash will be held at Marine Corps Base Hawaii. The free event — which boasts food, prizes, entertainment and, of course, kickball — is open to all single and unaccompanied Marines and sailors stationed at the base. Tournament registration begins at 10 a.m.

Dr. Seuss’ “How the Grinch Stole Christmas” will be screened at 7 p.m. Dec. 21 at Joint Base Pearl Harbor-Hickam at the AMC Terminal Lawn. The free showing will include refreshments and is open to active-duty military and their families.

Throughout the month, attendees at all USO Hawaii Holidays for Heroes events have the opportunity to receive a voucher good for up to four free tickets to the National Collegiate Athletic Association's Hawaii Bowl, which takes place Dec. 22 at Aloha Stadium in Honolulu. The first 2,000 vouchers will be available at the Wet‘n’Wild event.

On Dec. 25, a free Christmas dinner will be offered at USO Schofield Barracks for single and unaccompanied soldiers, while supplies last. For those who can't make it to the in-person events, an online "12 Days of Christmas" contest is being held Dec. 10-21 in cooperation with USO Joint Base Pearl Harbor-Hickam. The contest requires participants to submit stories and photos to Facebook, with prizes awarded daily.

Information about all events is available online at USO Hawaii’s Facebook page. The event schedule and offerings are subject to change.