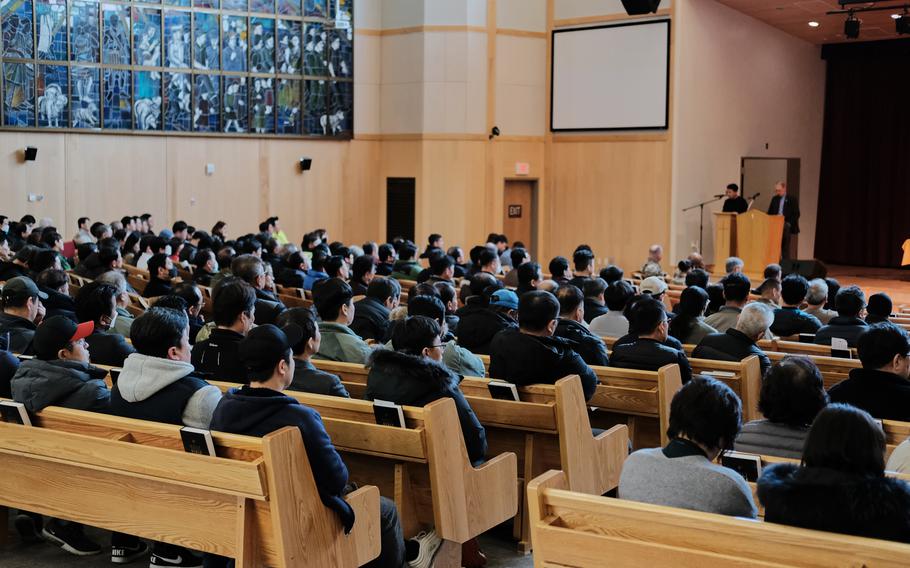 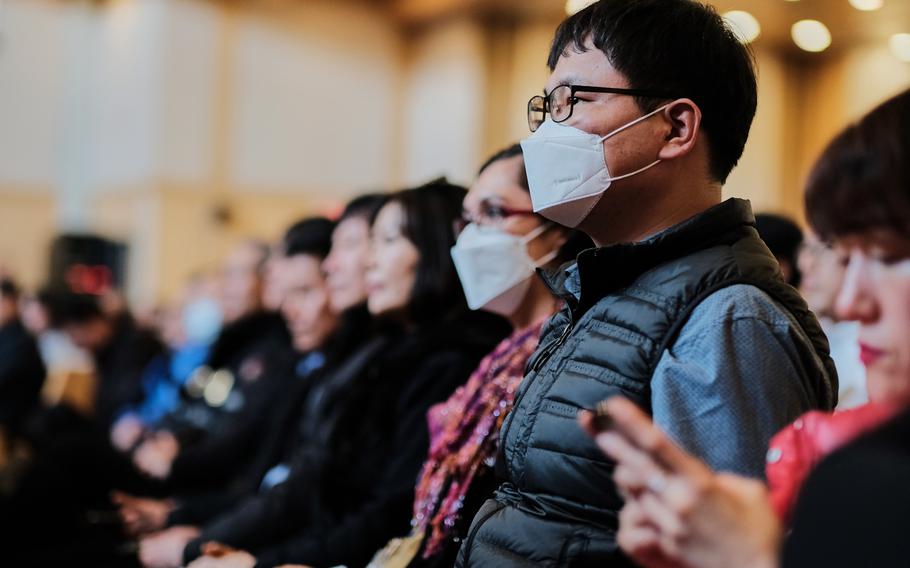 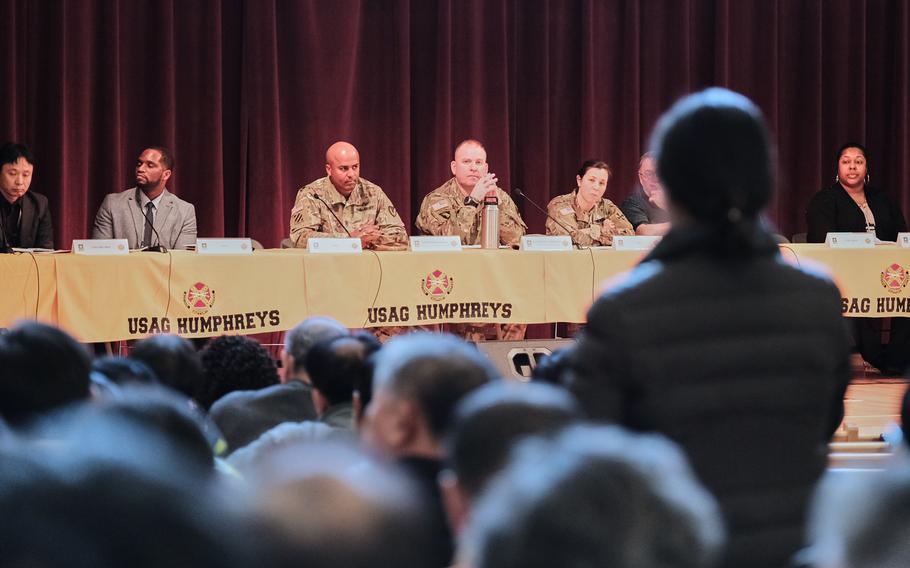 A woman asks a question during a town hall meeting about a possible furlough for South Korean workers at Camp Humphreys, South Korea, Wednesday, Jan. 29, 2020. (Matthew Keeler/Stars and Stripes)

CAMP HUMPHREYS, South Korea — Facing dwindling funds, the United States warned South Korean employees Wednesday that they may be placed on unpaid leave in April if Seoul and Washington are unable to reach a new defense cost-sharing deal.

The 60-day notice being sent to nearly 9,000 employees upped the ante as the allies remain deadlocked over U.S. demands for a sharp increase in South Korea’s contribution nearly a month after the previous contract known as the Special Measures Agreement expired.

U.S. Forces Korea said the notice was required by law and would be sent to all employees by Friday.

“United States Forces Korea began providing Korean National employees today with a 60-day notice of a potential administrative furlough that could occur on April 1, 2020, absent an agreed upon SMA,” USFK said in a statement.

‘Unprecedented situation’The dispute has become a major irritant in the decades-old alliance between the two countries as they face a growing nuclear threat from North Korea.

“The way we’ve organized ourselves requires us to have this interoperability – and beyond interoperability – to be able to fight together,” John Rood, the Pentagon’s policy chief, said Tuesday during a House Armed Services Committee hearing in Washington.

“Burden-sharing doesn’t come just down to dollars and cents obviously,” he said, noting South Korea’s large defense budget. “This is part of our message to our State Department colleagues that as you’re approaching these negotiations – and everyone wants equitable burden-sharing – some consideration just needs to be given about maintaining the health of that alliance, as we go forward.”

Many South Koreans expressed anger and frustration during a packed town hall-style meeting to discuss the furlough notice at a chapel on Camp Humphreys, the largest U.S. overseas base and home to USFK headquarters.

“The only people who will be hurt are Korean National employees,” Goldbat Hwang, a 59-year-old vehicle maintenance worker, said in an interview. He's worried people may be fired, although officials insisted that employees would return to work as soon as possible.

“Nobody knows what will happen after we are furloughed,” he said. “I feel that we are hostages. I have no idea how much the U.S. government is trying to get from Seoul, but I don’t think the South Korean government will accept it.”

Dwindling fundsCamp Humphreys officials told the audience that the remaining U.S. funds budgeted for South Korean employees would run out at the end of March, forcing the need for a furlough to begin April 1 if a new deal for South Korean funding isn’t reached.

“USFK cannot meet its Korean employee payroll with the lapse of the SMA,” said Paul Stuart, a deputy to the garrison commander, adding that a final decision was expected by the end of next month.

“Nothing we talk about today is a value judgment on you or your work as an employee,” he added. “We are all facing an unprecedented situation and endeavor to minimize impacts wherever we can. Today we want to ensure transparency and bring clarity to the situation that we are facing.”

Affected employees would be placed on a “nonpaid and nonduty” status and would not receive back pay, he said, adding that they won’t be eligible for unemployment benefits.

USFK already has implemented “austerity measures” including a freeze on local hiring and overtime pay.

Officials warned residents that they will likely face delays in non-emergency services with reduced hours at the post office and after-hours maintenance work.

Six rounds of talks since last year have failed to reach a consensus, although negotiators from both sides say they have narrowed their differences and the United States has softened its initial demand for nearly $5 billion per year, a fivefold increase.

Washington also is reportedly seeking to broaden the scope of the agreement beyond logistical and salary support to include money for American rotational troops and other off-peninsula costs.

Some South Korean employees criticized the steep U.S. demands. One man drew applause when he asked if Korean National employees would get a fivefold raise if the South Koreans agree to pay four or five times more.

Consequences on the groundGarrison officials said they couldn’t discuss the SMA talks, which are being held at a higher level.

“We don’t affect that down here. We deal with the consequences of it,” Stuart said.

South Korea has helped support U.S. troops under the agreement since 1991, with most of the funds used for administrative and logistical support as well as construction projects and the bulk of South Korean salaries.

USFK sent a notice in October to the Korean Employees Union, saying it may need to place local workers on unpaid leave beginning in April if an agreement isn’t reached.

The two sides also missed the deadline last year but eventually reached a retroactive deal for South Korea to pay some $920 million for 2019.

But that was a stopgap measure because it lasted for only one year. Previous deals had lasted five years.

Negotiators have gone public this year with their demands and complaints while anti-American activists held several rallies, including a group that briefly broke into the ambassador’s residence.

South Korea will hold parliamentary elections in April, adding a political complication to the negotiations, since the National Assembly must ultimately ratify the special measures agreement.

Some 28,500 American service members are stationed on the divided peninsula to defend South Korea, which remains technically at war with the North after their 1950-53 conflict ended in an armistice instead of a peace treaty.

South Korean Defense Minister Jeong Kyeong-doo stressed the importance of an “ironclad combined defense posture” during a separate meeting with Army Secretary Ryan McCarthy and Army Pacific Commander Gen. Paul LaCamera on Wednesday in Seoul, according to the ministry.