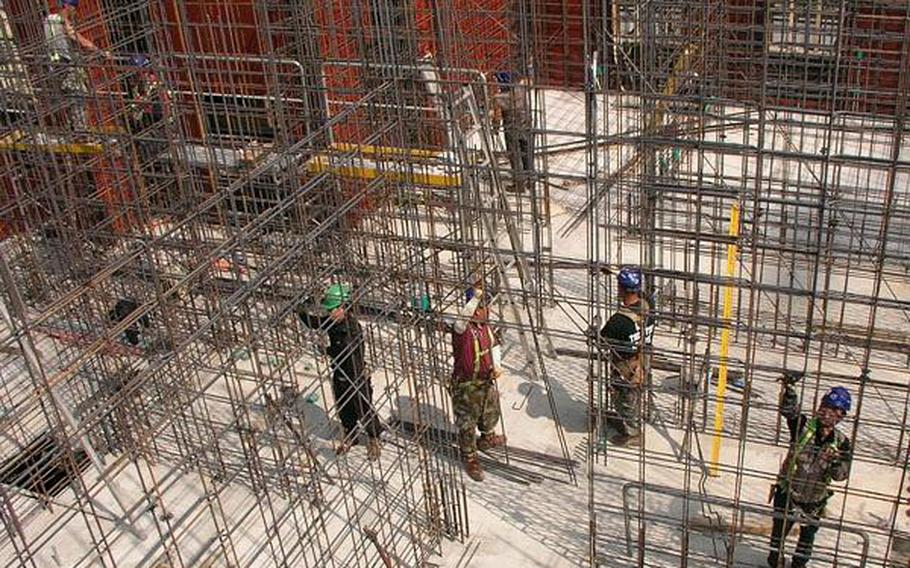 Buy Photo
Builders work on the construction of six eight-story barracks on land acquired for Camp Humphreys' expansion in this photo from April 2009. (Stars and Stripes)

Buy Photo
Builders work on the construction of six eight-story barracks on land acquired for Camp Humphreys' expansion in this photo from April 2009. (Stars and Stripes) 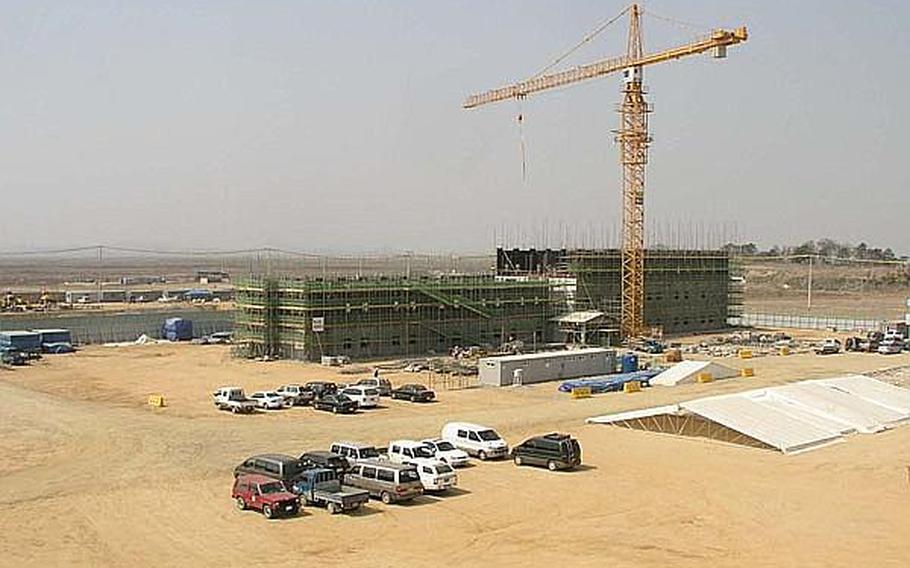 Buy Photo
Work moves forward on construction of six eight-story barracks on land acquired for Camp Humphreys' expansion in this photo from April 2009. (Stars and Stripes)

SEOUL &mdash; U.S. military officials say they remain committed to the planned consolidation of American troops in South Korea in areas south of Seoul despite a growing movement in the Senate to derail the effort.

&ldquo;Relocation of U.S. forces is a win-win situation for both the (Republic of South Korea) and U.S.,&rdquo; he said. &ldquo;It returns valuable land to (South Korea) while better positioning U.S. forces to support future operations.&rdquo;

On Tuesday, the Senate Armed Services Subcommittee on Readiness and Management Support unveiled its additions to the Senate&rsquo;s proposed defense budget for the coming year, which would deny funding for projects that would allow more servicemembers to bring their families with them when stationed in South Korea. The move also could affect U.S. military plans to move Marines off Okinawa.

Under current DOD plans, about one-half of the 28,500 U.S. troops stationed in South Korea would eventually be able to bring their families as part of a plan to relocate most of the American military here by 2016, from bases in and north of Seoul to regional hubs in Daegu and the Pyeongtaek/Osan area &ndash; both of which are south of the country&rsquo;s largest city.

Plans have been in motion for the consolidation of troops south of Seoul for more than a decade, and construction on a number of facilities needed for the move have either been completed or are underway. Once the move is made, more than half of the 100-plus U.S. military installations here would be turned over to South Korea. About 4,600 troops here are now allowed to be accompanied by their families.

&ldquo;Current agreements and policies have been carefully developed over many years in close consultation and coordination with our allies and within the U.S. government, including with the military services and with Congress,&ldquo; Department of Defense spokeswoman Navy Cmdr. Leslie Hull-Ryde said. &ldquo;This &hellip; does not change our commitment to our current approach.&rdquo;

Bruce Klingner, a senior research fellow for Northeast Asia in the Asian Studies Center at The Heritage Foundation, said in a paper posted on foundation&rsquo;s website that the plans now in motion support &ldquo;a growing South Korean desire for greater sovereignty over their own defense. To halt the realignment process would affirm the perception of some in South Korea that the U.S. is an &lsquo;occupying army&rsquo; and risk politicizing it into a campaign issue&rdquo; here.

But subcommittee Chairman Sen. Claire McCaskill, D-Mo., said the Department of Defense will have to provide a more detailed cost analysis of the base realignment and expanded tour normalization plan &ndash; complete with an analysis of other alternatives &ndash; before any more money is put toward construction projects related to the move.

A subsequent Government Accountability Office report said the military had not appropriately considered alternatives to its plans in the Pacific, and that its cost estimates were off. The projects now on the drawing board could actually cost close to $46 billion over the next decade, the report said.

Under questioning from Levin at his confirmation hearing last week before the Armed Services Committee, Secretary of Defense nominee Leon Panetta said he looked forward to working with the three senators and others &ldquo;to try to determine what the best and most cost-effective approach would be&rdquo; to maintaining a U.S. military presence in the Pacific region.

In their joint statement, the senators called for a &ldquo;stringent review&rdquo; to determine whether any missions in South Korea were redundant, and whether others might be carried out by South Korean troops. They also strongly criticized the idea of putting more military families potentially in harm&rsquo;s way.

&ldquo;There is an inherent contradiction in planning to increase the number of U.S. military family members in South Korea, when there is the real potential that a destabilizing security situation in North Korea could unfold rapidly and unpredictably,&rdquo; said a statement posted on Webb&rsquo;s website.

&ldquo;We appreciate the perspectives of the senators, but their report does not change our commitment to current plans to maintain a forward presence in the region that is geographically distributed, operationally resilient and politically sustainable,&rdquo; said Hull-Ryde. &ldquo;The department&rsquo;s long-term goal is to phase out all unaccompanied tours in Korea.&rdquo;

U.S. Forces Korea commander Gen. Walter Sharp has been a strong supporter of increasing the number of command-sponsored tours here, saying that the chances of a large-scale attack from the North are remote.

&ldquo;It also reinforces the long-term alliance relationship and decreases stress on servicemembers and their families,&rdquo; he said. &ldquo;We remain confident (the consolidation of troops south of Seoul) &hellip; will be accomplished as planned.&rdquo;

A spokesman for the South Korea Ministry of National Defense said Thursday the country is safe for U.S. military families thanks to the combined efforts of the U.S. and South Korean militaries.

&ldquo;Not only are there many foreigners living in South Korea at the present time,&rdquo; the spokesman said, &ldquo;but the number of visitors to South Korea goes up every year.&rdquo;

The defense ministry is also confident the U.S. troop realignment will ultimately proceed as planned, he said.

&ldquo;The realignment of U.S. troops in South Korea is a project which the U.S. and Republic of Korea have been carrying forward for a long time, after extensive discussions,&rdquo; the spokesman said. &ldquo;The two countries continue to work together closely.&rdquo;

Bruce Bechtol Jr. &ndash; who has written extensively about Korean security issues and once served as the senior analyst for Northeast Asia in the Intelligence Directorate on the Joint Staff in the Pentagon &ndash; told Stars and Stripes that &ldquo;there&rsquo;s surprisingly little meat in anything these (senators) have said.

&ldquo;All they&rsquo;ve said is that this is really expensive and it needs to be put on hold,&rdquo; he said. &ldquo;Yes, it is more expensive to bring families for three-year tours &hellip; but completely to change that plan in midstream &hellip; could actually be more expensive than not changing it.&rdquo;

Klingner said in his posting that allowing more families to accompany servicemembers not only improves &ldquo;the military quality of life,&rdquo; but also, &ldquo;reassures South Korea of Washington&rsquo;s continued commitment to defend its ally.&rdquo;