USFK commander weighs in on dispute over intel-sharing pact between Japan, South Korea 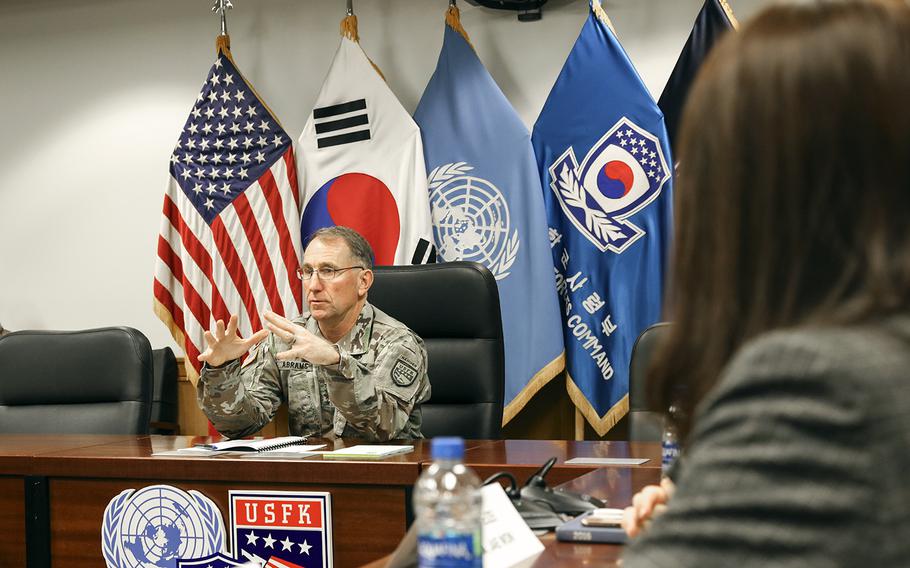 SEOUL, South Korea — South Korea’s decision to end a military intelligence sharing pact with Japan risks sending the wrong message on security in the region, the top American commander on the peninsula said 11 days before the agreement is due to expire.

Gen. Robert Abrams, who commands U.S. Forces Korea, made the comments ahead of a visit to South Korea later this week by Defense Secretary Mark Esper.

South Korea gave notice in August that it planned to terminate the U.S.-backed General Security of Military Information Agreement, or GSOMIA, due to a spat with Japan over trade and historical enmities.

The U.S. administration, which considers the pact vital to trilateral cooperation against threats from North Korea and China, has been pressing Seoul to change its mind ahead of the Nov. 23 expiration date.

“The fundamental principle of the information-sharing agreement was a clear message to the region that [South Korea] and Japan put aside perhaps historical differences,” Abrams told reporters Tuesday at Camp Humphreys, where USFK is headquartered.

“Together, we are much stronger for providing for a stable and secure Northeast Asia. And without that, there is a risk of sending the wrong message that perhaps we’re not as strong,” he said.

The agreement, which was signed in 2016, streamlined the intelligence-sharing process by enabling Tokyo and Seoul to communicate directly instead of having to go through Washington.

The three countries have other information-exchange mechanisms, but experts say canceling the agreement will likely slow the process at a pivotal time as North Korea has recently resumed missile launches.

South Korea has insisted it would reconsider the decision only if Japan agrees to lift export curbs.

Seoul, which is seeking further compensation for Japan’s 1910-45 occupation of South Korea, believes Tokyo imposed the curbs as a form of economic retaliation.

The dispute over intelligence sharing along with contentious defense cost-sharing talks between South Korea and the United States have raised concerns about the future of the alliance between the two nations that fought together in the 1950-53 Korean War.

Washington wants South Korea to sharply increase its contribution to offset the cost of stationing some 28,500 U.S. troops on the peninsula, with some reports saying the U.S. is demanding nearly $5 billion a year.

The current contract, known as the Special Measures Agreement, expires at the end of the year.

Abrams noted that the State Department, which is leading the negotiations, has said the South Korean government “can and should pay more.”

“I agree with that,” he said. “And I’ll remain optimistic we find some common ground between our two governments.”

The four-star general assumed command of USFK as well as the United Nations Command and the Combined Forces Command last November as diplomatic efforts to persuade North Korea to abandon its nuclear weapons were at a high point.

Talks have since stalled as Washington and Pyongyang failed to agree on the extent of denuclearization and sanctions relief despite a series of summits and working-level talks.

The North has agreed to suspend long-range missile and nuclear tests but has warned it may lift that moratorium if the U.S. doesn’t offer a more flexible approach by the end of the year.

It recently launched a series of short-range missiles and rockets, but President Donald Trump played down concerns about the weapons testing, saying he maintains a good relationship with North Korean leader Kim Jong Un.

Abrams said the U.S. and South Korean militaries were studying the launches closely. “We take every one of those very seriously to determine capabilities, limitations and intent.”

“I think these missile tests that we have seen in 2019 are not contributing to a continued air of détente on the Korean peninsula,” Abrams said. “I don’t think they are helpful to foster an environment for the very important work of our diplomats to continue.”