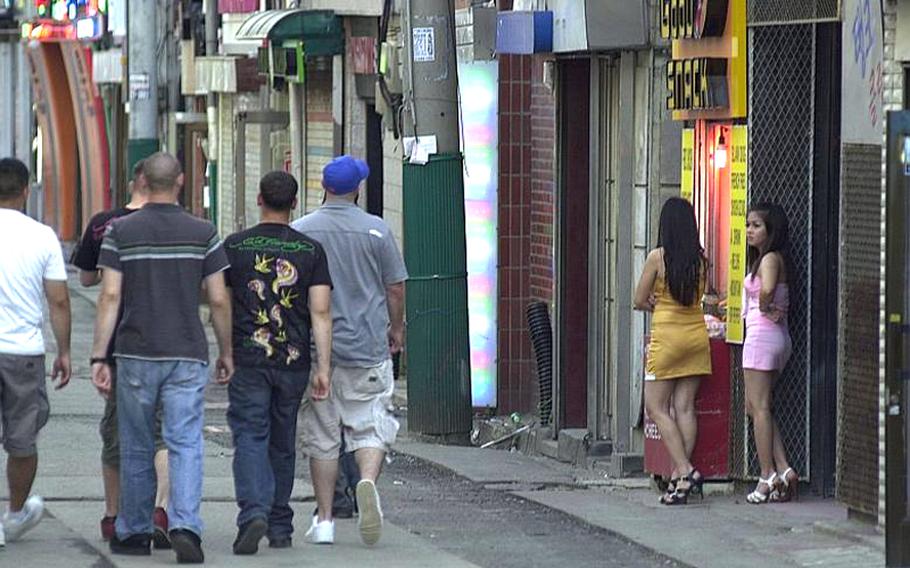 SEOUL, South Korea — U.S. Forces Korea has banned servicemembers from buying drinks for workers in “juicy bars,” which have long been suspected of involvement in prostitution and human trafficking.

While the military has maintained a zero-tolerance policy toward prostitution, buying drinks in exchange for female company was not strictly prohibited by USFK. That changed with a new policy letter released to troops on Oct. 15.

“Paying for companionship directly supports human trafficking and is a precursor to prostitution,” USFK commander Gen. Curtis Scaparrotti wrote in announcing the change. “This practice encourages the objectification of women, reinforces sexist attitudes, and is demeaning to all human beings.”

Juicy bars are typically staffed by scantily clad women, usually brought in from the Philippines on entertainer visas, who sell pricey nonalcoholic drinks to servicemembers in exchange for their company. Patrons also can buy out the remainder of the employee’s workday and take them outside the club in a practice known as “bar-fining” or “buying a day off.”

“There are establishments outside our installations that support human trafficking, usually of young women, many of whom are brought into the country under false pretenses as entertainers and forced to work in bars or other establishments in violation of their visas,” Scaparroti wrote. “They are subjected to debt bondage and made to sell themselves as companions, or forced into prostitution.”

The U.S., South Korea and the Philippines have acknowledged links between juicy bars and prostitution and human trafficking.

The updated policy bans providing money or anything of value in exchange for a bar worker’s company inside or outside their place of employment, including fees to play darts or pool, or buying drinks or souvenirs. Violators are subject to UCMJ punishment, administrative action and punishment.

The policy applies to all military personnel in South Korea, including those on temporary or rotational duty, and to USFK-supported organizations. Department of Defense civilians, contractors, family members and visiting guests are encouraged to abide by the order.

The command said in an email that the policy update “was issued as part of the continuing efforts of USFK to combat prostitution and human trafficking.”

While USFK has long condemned prostitution and human trafficking, it has allowed troops to patronize juicy bars unless they were caught blatantly taking part in those practices.

In 2010, then-USFK commander Gen. Walter Sharp said all juicy bars should not be punished for the actions of a few.

“The bottom line is that juicy bars … have women that are there to talk to soldiers and sailors and airmen and Marines,” he said. “You can’t presume that things go beyond that, which is what you would have to do if you want to put them [all] off-limits.

“We, I think, investigate very clearly any allegation … if you’re in an establishment where it does go beyond that,” he added. “Then, if we investigate it and find that true, then we do put them off-limits. I think that we work very hard on that, and we’ve got a good system in place for it.”

Military officials have long complained of the difficulty in drawing direct links between the seemingly innocuous selling of “juice” and prostitution and human trafficking.

“We knew certain things were going on, but we didn’t have the proof necessarily,” Col. Michael Strunk, 51st Fighter Wing Mission Support Group commander at Osan Air Base, said earlier this year. The 7th Air Force says its crackdown on juicy bars has led to the closure of dozens of the establishments in the popular Songtan area in the past year and a half.

The South Korean government announced last year that it was increasing its oversight of businesses that hire foreigner entertainers, including a number that were near U.S. bases, in an effort to cut down on human rights violations.