USFK adds 4 launchers to THAAD as protesters clash with police 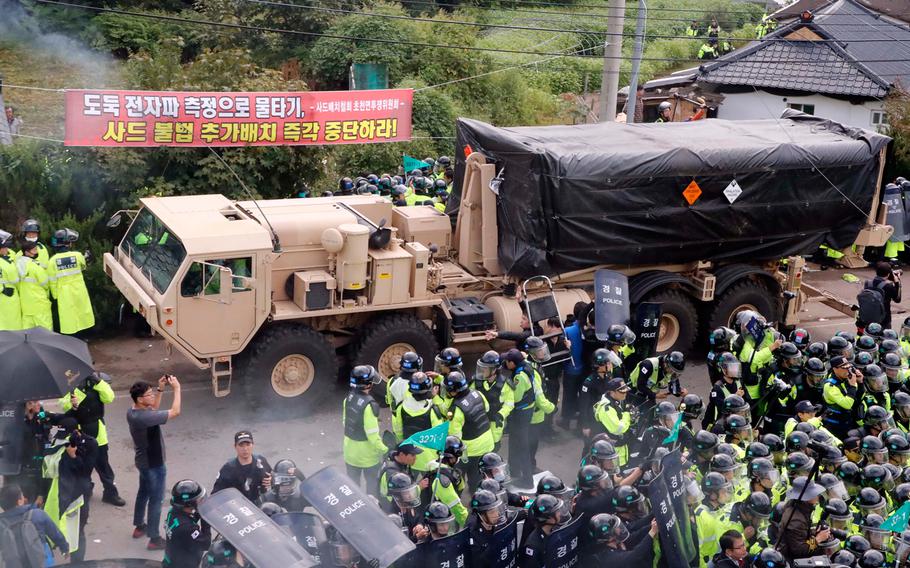 China also offered support for calls for tightening U.N. Security Council sanctions against the North, although it stressed the goal should be dialogue leading to a peaceful resolution.

“We believe that sanctions and pressure are only half of the key to resolving the nuclear issue. The other half is dialogue and negotiation,” Foreign Minister Wang Yi was quoted as saying. “Only when the two are put together can it unlock the nuclear issue of the Korean Peninsula.”

Beijing also reiterated its opposition to the Terminal High Altitude Defense system, with a foreign ministry spokesman saying a complaint over the issue was lodged with Washington and Seoul.

China fears the system’s powerful radar could be used against it despite U.S. insistence that it’s only aimed at countering the growing threat from the North.

Seoul and Washington agreed in July 2016 to station THAAD in the melon farming region of Seongju, about 190 miles southeast of Seoul.

Military officials have stressed the urgency of getting THAAD operational as Pyongyang has stepped up its nuclear weapons program.

The North has conducted three nuclear tests since last year, the most recent on Sunday.

The communist state also test-fired two intercontinental ballistic missiles in July and is reportedly poised to possibly launch another one in connection with Saturday’s 69th anniversary of its foundation day.

But the plan has faced several hurdles, including fierce objections from residents in Seongju, about 190 miles southeast of Seoul. U.S. Forces Korea moved two launchers and the radar into place in late April.

Thousands of South Korean police were deployed near the THAAD site, which is in a remote southeastern area of the country, to clear the way for the U.S. convoy carrying the four additional launchers and other equipment on Thursday.

The defense ministry said that, despite the protests, the THAAD deployment was completed.

Officials stressed it was a “tentative” measure resulting from the urgent threat posed by North Korea and a decision on maintaining THAAD will be made after a full environmental impact assessment is completed.

"The battery will be operational as soon as the U.S. finishes its internal procedures," ministry spokesman Moon Sang-gyun told reporters. He also said China had been informed ahead of the move.

THAAD consists of six truck-mounted launchers that can fire up to 48 interceptors after missiles are detected by its X-band radar. It’s meant to be part of a layered defense system, with lower altitude Patriot missiles already in place to protect Seoul and surrounding areas.

USFK, which has tried to maintain a low profile on the issue, has stressed THAAD “is strictly a defensive system” that will improve its ability to protect the peninsula.

In a fact sheet posted Thursday on its website, the military said THAAD can intercept the short-range and intermediate-range missiles known to make up the bulk of North Korea’s massive arsenal. It singled out Scuds, Rodongs and Musudans.

China’s Foreign Ministry spokesman Geng Shuang said Beijing lodged a complaint with to Washington and Seoul about THAAD and called on them to “immediately stop the deployment process and withdraw relevant equipment,” according to The Associated Press.

During their meeting Thursday in the Russian city of Vladivostok, Moon and Abe called for stronger punishing measures against the North, including an oil embargo, according to the president’s office.

“We should not give in to emotions and push Pyongyang into a corner,” Putin said during a news conference after meeting with Moon on Wednesday in Vladivostok.