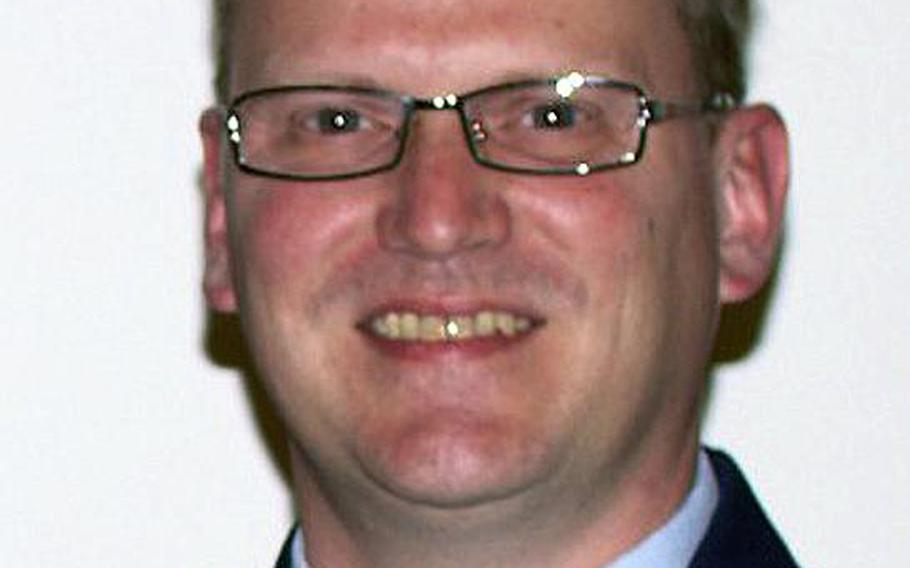 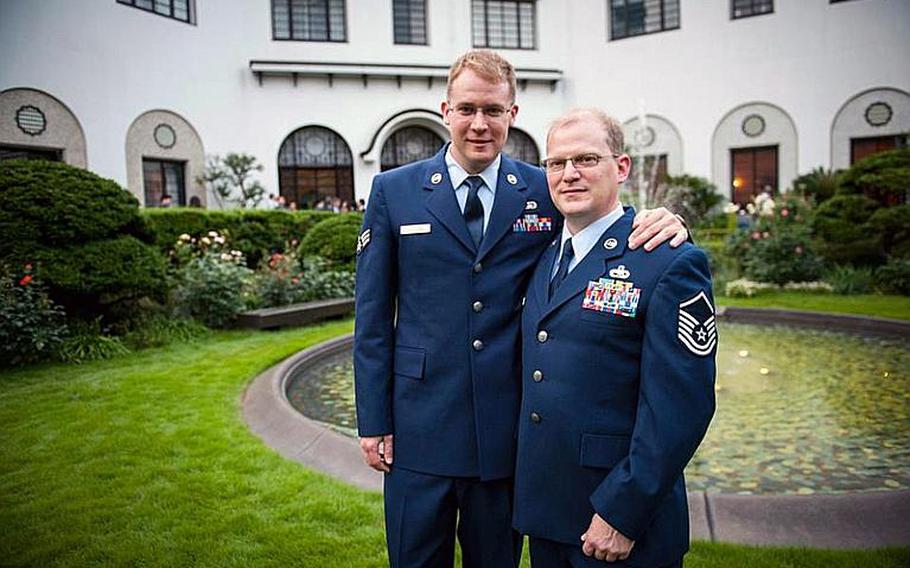 Senior Airman Luke Bullard, left, and Master Sgt. Marc Maschhoff, both from Misawa Air Base, Japan, pose for a photo June 4, 2012, at the home of U.S. Ambassador to Japan John Roos in Tokyo. The ambassador held a reception Monday evening to commemorate Lesbian, Gay, Bisexual, Transgender Pride Month, which President Barack Obama has proclaimed each June since taking office in 2009. (Courtesy Sam Morse)

TOKYO &mdash; Master Sgt. Marc Maschhoff revels in the turns his life has taken in the last year.

Last summer, Maschhoff had to keep his sexuality a secret or risk being kicked out of the Air Force.

On Monday, he was happily introducing his boyfriend to diplomats and politicians from around the world as the U.S. ambassador to Japan held a reception in honor of Lesbian, Gay, Bisexual, Transgender Pride Month.

&ldquo;I can&rsquo;t believe I&rsquo;ve been in the Air Force 23 years living in secret, hiding who I am,&rdquo; Maschhoff said before heading to the reception, which was closed to the media, &ldquo;and now I&rsquo;m invited to a reception by the emissary of the president of the United States.&rdquo;

It was an exciting and emotional night for Maschhoff and a handful of other U.S. servicemembers. Maschhoff traveled with his boyfriend &mdash; who is also an airman &mdash; from Misawa Air Base in northern Japan to Tokyo for the event. Maschhoff said he was invited by the embassy because of his affiliation with the group Outserve, a Washington, D.C.-based association for gay servicemembers with chapters worldwide.

U.S. embassies around the world are hosting events this month to honor the struggles and contributions of the LGBT community.

&ldquo;Because we understand that LGBT rights are human rights, we continue to engage with the international community in promoting and protecting the rights of LGBT persons around the world,&rdquo; President Barack Obama wrote in his June 1 proclamation for LGBT Pride Month, the fourth he&rsquo;s designated since taking office. &ldquo;LGBT Americans and allies have achieved what once seemed inconceivable.&rdquo;

U.S. Forces Japan was invited but did not send any representatives to the event. A USFJ spokesman said the commander was out of the country on business Monday.

Along with successfully ordering Congress to repeal &ldquo;don&rsquo;t ask, don&rsquo;t tell,&rdquo; Obama has fundamentally changed federal workforce policies to provide some same-sex employee benefits to some federal workers. Servicemembers remain ineligible because of the federal Defense of Marriage Act, a 1996 law prohibiting the federal government from recognizing gay marriage.

During an embassy press briefing before the ambassador&rsquo;s reception, Mark Bromley, chairman of the Council for Global Equality, a nonpartisan human rights organization based in Washington, D.C., said the marriage act is likely bound for the Supreme Court.

The inequitable allocation of federal employee benefits based on sexual orientation &ldquo;hurts both economically and psychologically,&rdquo; said Bromley, the husband of a State Department employee, &ldquo;because it&rsquo;s a reminder that we haven&rsquo;t achieved full equality.&rdquo;

In an interview before the reception, Linehan relayed a story about being a young gay foreign service officer. On his second day on the job, he was told, &ldquo;There&rsquo;s no room for homos in the U.S. government. If you&rsquo;re queer, you&rsquo;re out.&rdquo;

After the reception, Maschhoff said the evening&rsquo;s events, and particularly the consul general&rsquo;s story, made him more emotional than he expected.

&ldquo;I remembered similar briefings and occurrences in the Air Force,&rdquo; said Maschhoff, a military brat who never thought the institution he grew up in would accept homosexuals. &ldquo;I got really choked up.&rdquo;

&ldquo;I&rsquo;m retiring from the Air Force this month,&rdquo; he said. &ldquo;What a way to end a career.&rdquo;