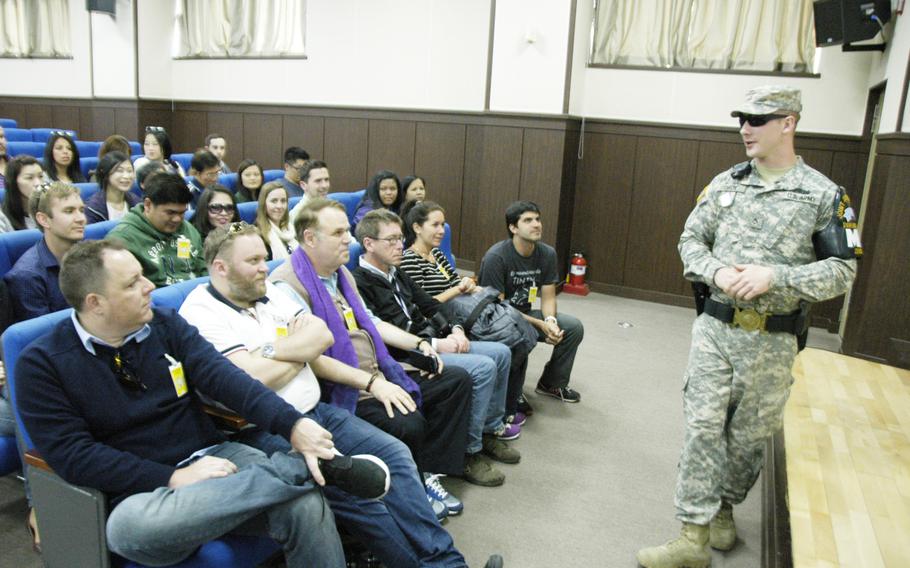 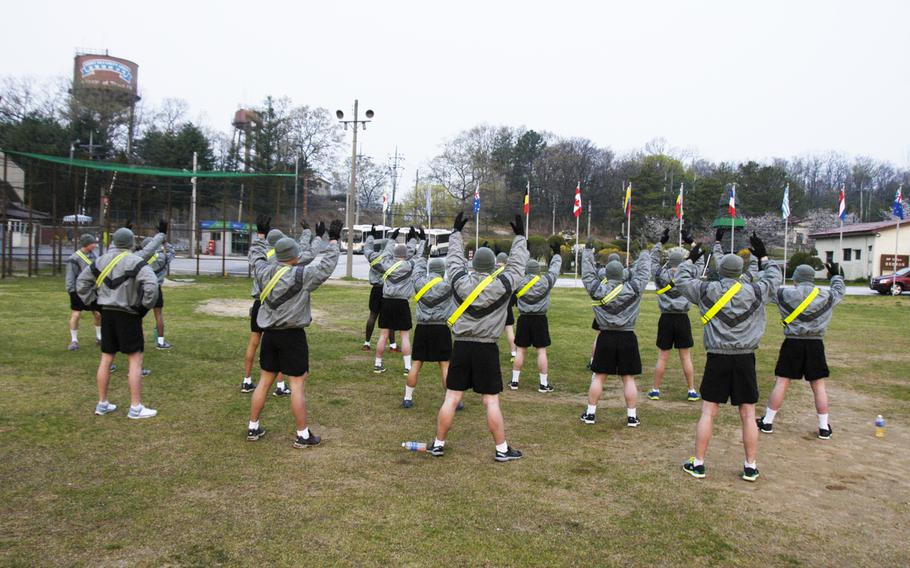 U.S. troops start the day with physical training at Camp Bonifas, South Korea, near the Demilitarized Zone, in April 2015. (Seth Robson/Stars and Stripes) 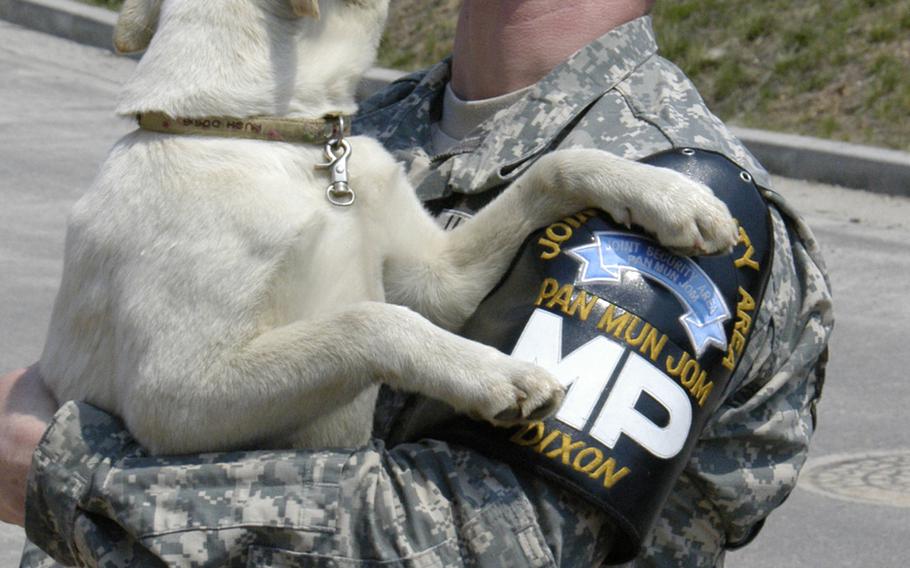 Pfc. Joshua Dixon, 23, of Brainerd, Minn., hangs out with a friend at Camp Bonifas, South Korea, in April 2015. Dixon is among U.S. troops who are assigned to the northernmost camp in South Korea, just miles from the Demilitarized Zone. (Seth Robson/Stars and Stripes) 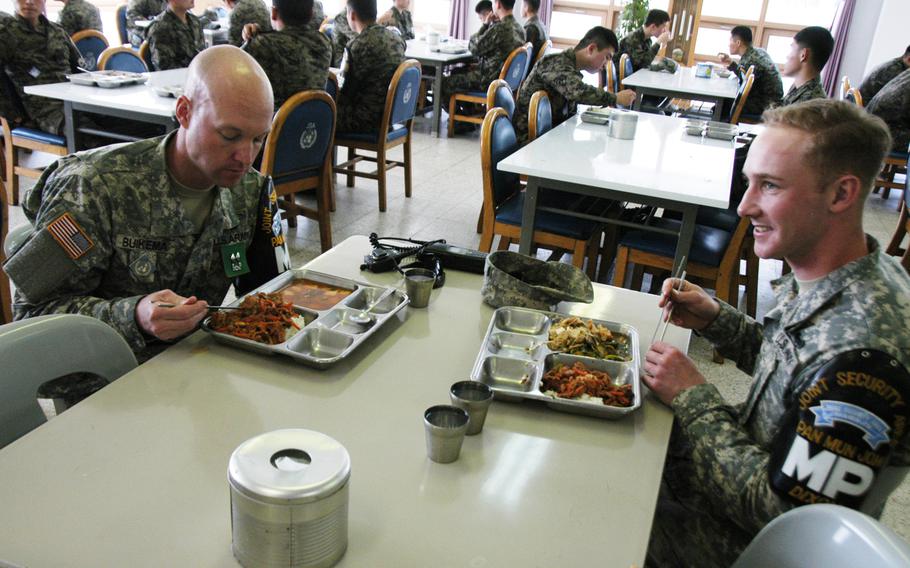 Pfc. Joshua Dixon, right, has lunch with a fellow soldier in April 2015 at the South Korean dining facility on Camp Bonifas, South Korea. The U.S. base a few minutes' drive from the Demilitarized Zone lacks its own dining facility, meaning U.S. troops there must eat traditionally spicy Korean fare or fend for themselves. (Seth Robson/Stars and Stripes) 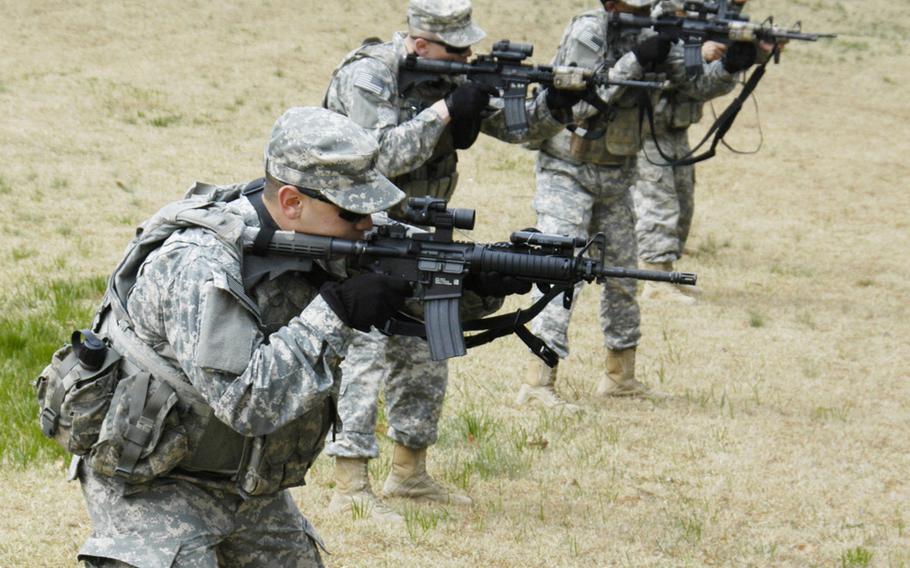 U.S. troops train at Camp Bonifas' 1-hole golf course in April 2015 to respond to incidents in the Joint Security Area. With few distractions because of the remote assignment a few minutes' drive from the Demilitarized Zone, soldiers spend a lot of training or lifting weights. (Seth Robson/Stars and Stripes) 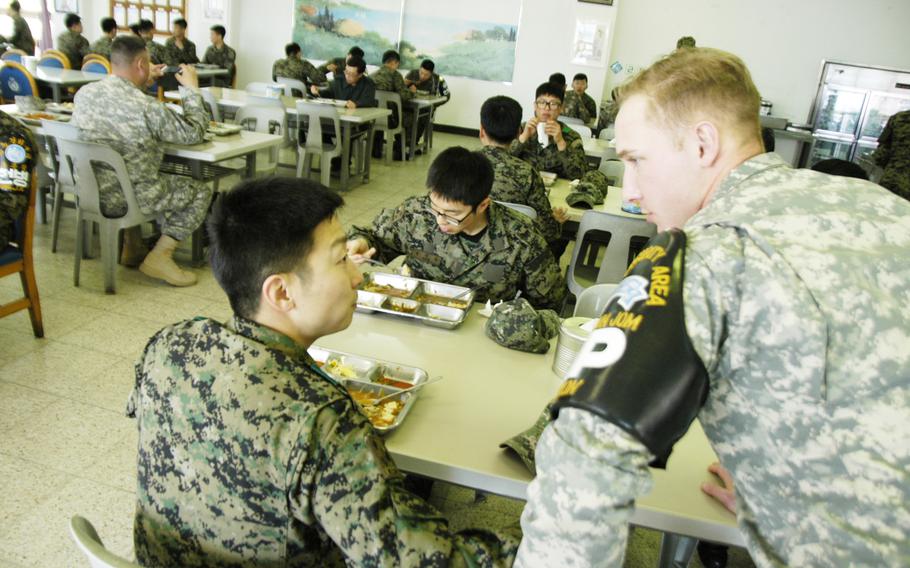 Pfc. Joshua Dixon, 23, of Brainerd, Minn., catches up with a South Korean friend during lunch at Camp Bonifas, South Korea, in April 2015. (Seth Robson/Stars and Stripes) 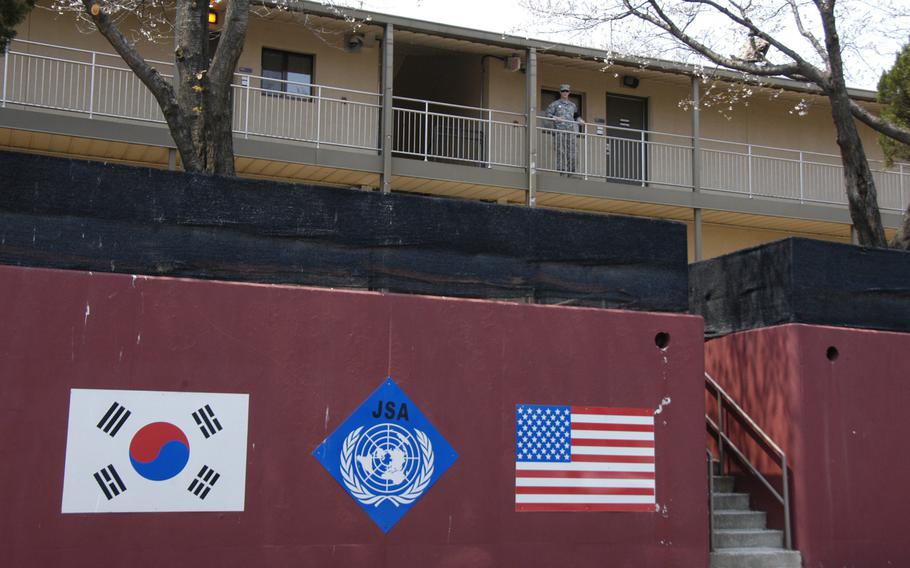 The building where U.S. troops live on Camp Bonifas, South Korea, near the Demilitarized Zone, is nothing special, but troops get their own rooms, sharing a bathroom and kitchenette with a roommate. (Seth Robson/Stars and Stripes) 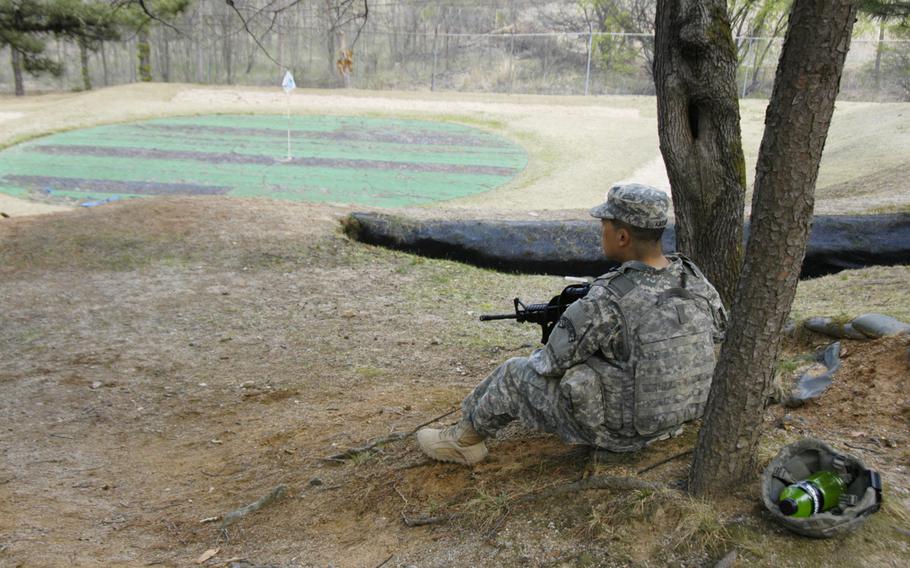 There are limited training facilities on Camp Bonifas, South Korea, a few minutes' drive from the Demilitarized Zone, so U.S. troops use the post's 1-hole golf course to practice infantry tactics. (Seth Robson/Stars and Stripes) 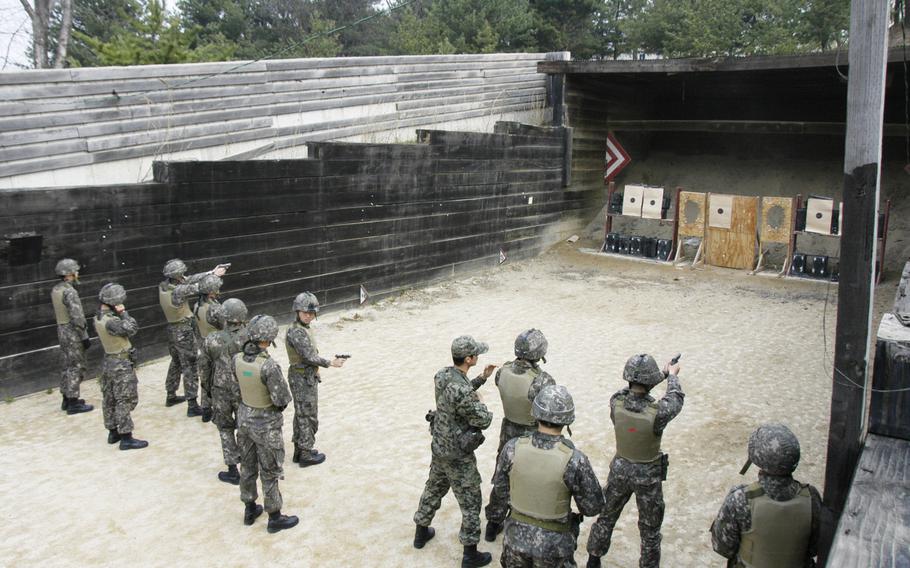 South Korean troops train on a pistol range at Camp Bonifas, South Korea, near the Demilitarized Zone, in April 2015. (Seth Robson/Stars and Stripes) Pfc. Joshua Dixon cooks breakfast in his room at Camp Bonifas, South Korea, near the Demilitarized Zone, in April 2015. (Seth Robson/Stars and Stripes) 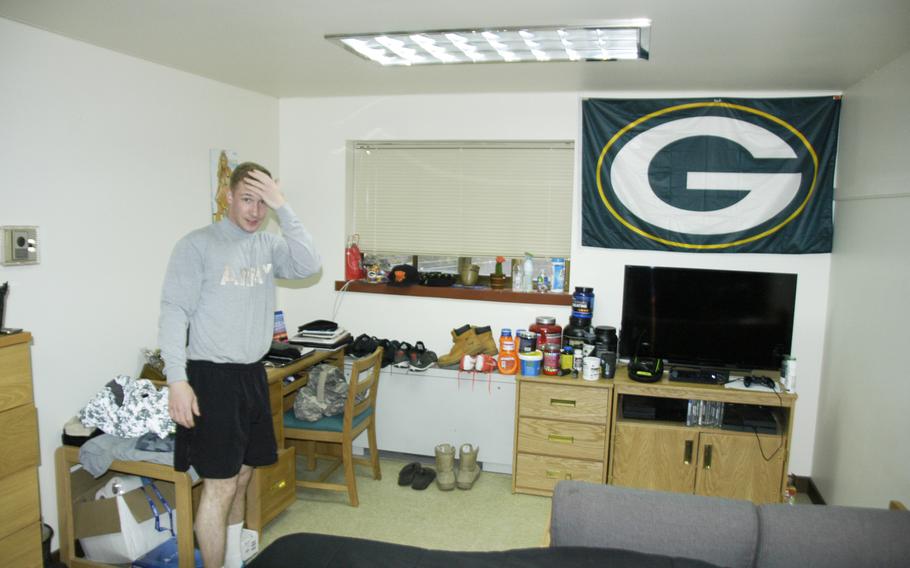 Pfc. Joshua Dixon's room at Camp Bonifas, South Korea. Accommodations are spartan, but troops at the remote base near the Demilitarized Zone get their own rooms and share a bathroom and kitchenette with a roommate. (Seth Robson/Stars and Stripes) 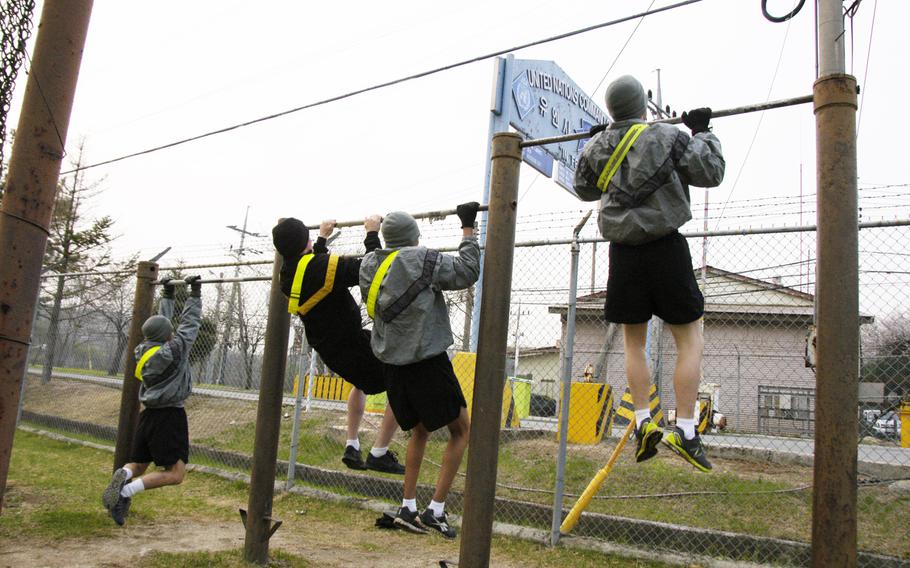 CAMP BONIFAS, South Korea — “Is anyone planning to defect?”

It’s a question that never fails to crack up visitors during tours to the Joint Security Area, where North and South Korean soldiers face off inside the Demilitarized Zone separating the rival nations.

Pfc. Joshua Dixon, 23, of Brainerd, Minn., has been asking the question of tourists for the past year as a member of the United Nations Command Security Battalion at Camp Bonifas.

“Most people laugh. But if there’s a guy who doesn’t even smile I keep my eye on him,” said Dixon, who spends about a third of his time helping run the tours, often for other servicemembers assigned to Korea.

Camp Bonifas — only a few minutes’ drive from the JSA — hosts 800 to 900 visitors each day, so escorting them is a big part of the job for the troops on the world’s most militarized border.

It’s a place where the relative calm belies the threat across the border from a belligerent country that has been developing nuclear weapons and ballistic missiles and periodically heats up tensions to a boil. The barbed-wire frontier is heavily mined and under constant scrutiny with armed foot patrols by both sides.

Like many of the U.S. soldiers at Camp Bonifas, this is Dixon’s first duty station. He enlisted in November 2013 after dropping out of an athletic studies course at the University of Minnesota Duluth.

“I was sitting in class and I checked my bank account and I was in debt,” he recalled. “I walked into the recruiting office and asked: ‘What can you do for me?’ ”

Some of the young Bonifas troops think it’s tough duty — the conditions are relatively spartan, and no families are allowed, unlike at bases further south. However, talking with noncommissioned officers and officers who have served in Iraq and Afghanistan puts things in perspective, Dixon said.

“Soldiers who haven’t been deployed think this is pretty bad, but you have to realize that it could always be worse,” he said.

Before they can run the tours, U.S. troops must memorize a 13-page-history of the Korean War along with details about what goes on at the JSA. They also some of their time on standby, ready to respond to incidents in the JSA.

There have been some high-profile incidents over the years. In 1976, North Korean troops used an ax to murder two U.S. officers, including Camp Bonifas’ namesake, Capt. Arthur Bonifas. In 1984, a firefight broke out after a Soviet defector ran into South Korea.

When the Americans are on standby, they spend their time training. Camp Bonifas has its own shoot-house, where soldiers can practice fighting, and a pistol range, but the soldiers also train at ranges outside the post including one that has a mock-up of the JSA.

“We mostly train infantry tactics but we do some personal security detail training to make sure we can bring anyone we bring into the DMZ safely back to Camp Bonifas,” Dixon said.

Initially a Special Forces recruit, Dixon ended up a military policeman due to color blindness and an ear problem. However, recruiters for the security battalion saw something special in him when he joined at the 2nd Infantry Division in Korea and called him in for an interview.

“They were looking for guys with good PT (physical training) scores and clean military and civilian backgrounds,” he said. “They tell you it is a little harder up here and you’re under a little more restrictions, but it’s a real-world mission.”

That was enough for Dixon, who has come to love life at Camp Bonifas, even though the isolation means troops there don’t get to see much of South Korea; they must be able to get back within two hours if there’s an emergency.

Dixon’s day, like that of the other troops up north, starts with a formation on an indoor basketball court followed by physical training. As the sun came up on a recent chilly morning, he and two dozen others ran and did pull-ups and calisthenics on a baseball field to get their blood pumping.

Afterward, Dixon headed back to his barracks — it’s nothing special, but troops get their own rooms, sharing a bathroom and kitchenette with a roommate.

The dining facility is being renovated so the troops cook most meals in their rooms. The Army sent a nutritionist and a finance specialist to the base last year to teach them about cooking and shopping for healthy food, Dixon said as he fried eggs and potatoes on an electric range.

For now, the troops make runs to the commissary on Yongsan Garrison in Seoul every two weeks to stock up on groceries, although they can buy snacks from an Army and Air Force Exchange Service trailer on Camp Bonifas several days a week.

After breakfast, Dixon swapped his T-shirt and shorts for a camouflage uniform and a Joint Security Area armband, and it was off to work.

At midday, Dixon stopped at the South Korean troops’ dining facility for lunch that was typical Korean fare: pork, rice and spicy cabbage kimchi. He bumped into several South Korean soldiers with whom he has become friends.

The U.S. troops also interact with soldiers from several other nations, including New Zealand, Canada, Switzerland, Sweden and Poland, who work with the United Nations Command Military Armistice Commission.

The unarmed U.N. troops are charged with investigating armistice violations. There is a direct telephone link to North Korea, although the communists haven’t answered it for 2 ½ years. When troops want to communicate with the North Koreans — usually to talk about repatriation of Korean War remains — they use a loud hailer, Dixon said.

On those trips north, the American troops sometimes find themselves nose-to-nose with the North Koreans, Dixon said.

“They will stare at you for a good minute and try to test you,” he said. “I had a North Korean soldier unholster his pistol, bring it up a few inches and look at me. He was about a foot away.”

Dixon said he just stood his ground until the North Korean walked away.

“You don’t want to be up there starting World War III,” he said. “If I put my hand on my holster they would have used the image for propaganda saying that America is threatening North Korea.”

The North Koreans are always interested in people who visit the DMZ. They’ve taken Dixon’s photograph more times than he can count but sometimes they get a little carried away, he said.

“One guy thought he was taking lots of pictures of me but he still had the lens cap on,” he said. “It took every ounce of energy not to laugh.”

After work, the troops at Camp Bonifas usually hit the gym.

“We are big on after-hours PT,” Dixon said.

The ancient Quonset hut where the troops lift weights is busy every evening. On weekends, the Americans play rugby and football among themselves and baseball and soccer with their South Korean counterparts.

In the evening, many of the young soldiers play video games or watch U.S. TV or movies online. Dixon has a PlayStation 4, a big-screen TV and a big pile of game discs in his room along with enough body-building protein powders and supplements to feed a small army.

He’s also got more memorabilia from celebrity visitors than most troops acquire in a lifetime. His military coin collection includes keepsakes from some of the highest-ranking officers in the Department of Defense. In one corner of his room sits a football signed by Indianapolis Colts quarterback Andrew Luck and a baseball signed by Major League Baseball pitcher Randy Johnson. During his year in Korea, Dixon has met Colts coach Chuck Pagano and watched pro golfer Paula Creamer play the camp’s one-hole course.

When he visits Camp Casey, where most of the other 2nd ID soldiers are based, he runs into troops who complain about the hardship of serving in Korea. Dixon finds that amusing, since the massive camp has many more facilities than Bonifas: a nine-hole golf course, fast-food outlets and a movie theater. And it’s surrounded by off-post bars and restaurants.

“I see people at Camp Casey who put #DMZ (in online posts) and shake my head,” he said, but added that “we have it a little harder than the rest of the Korean peninsula, but we are proud to be here.”