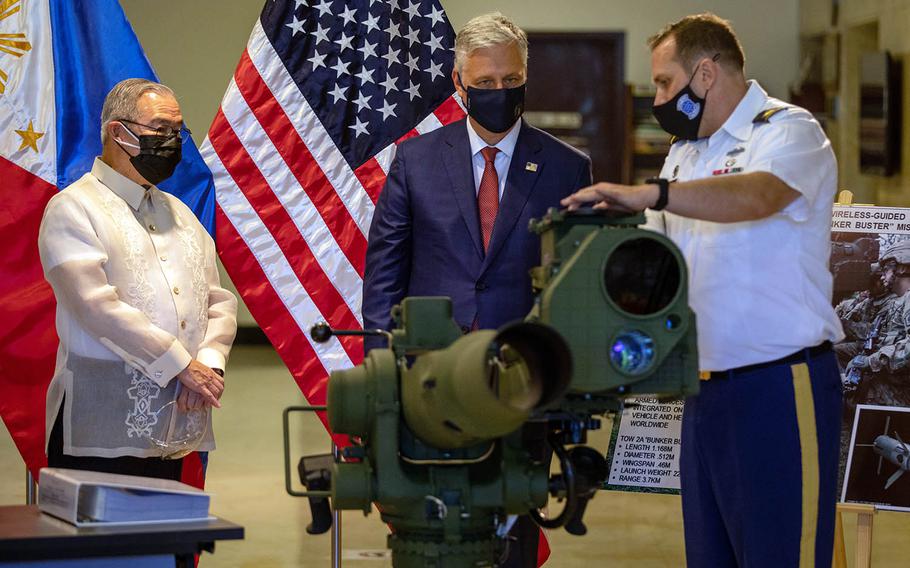 A catalog’s worth of armaments worth nearly $33 million, including 100 wire-guided missiles, 12 thermal imaging systems, two dozen 500-pound bombs and a reconnaissance drone, were delivered to the Philippines by U.S. officials this week, according to the State Department.

A $14.79 million ScanEagle drone was transferred to the Philippine navy on Wednesday to increase its maritime surveillance and border security capabilities, according to a statement posted by the U.S. Embassy in Manila that day.

The drone will operate out of Naval Station Leovigildo Gantioqui, the statement said.

The base is near Subic Bay, a former U.S. Navy base on the Philippines’ main island of Luzon that’s a regular port of call for U.S. warships.

“This new asset will complement the same kind being operated by the 300th Air Intelligence and Security Wing at the Antonio Bautista Air Base in Palawan, which is very close to the disputed areas in the West Philippine Sea that need our consistent attention,” Armed Forces of the Philippines deputy chief of staff Vice Admiral Erick Kagaoan said of the drone, according to the embassy statement.

The drone handover followed a transfer of missiles and bombs on Monday.

“I am pleased to transfer (a) package of precision-guided missiles, munitions, including 100 TOW-2A missiles, 12 ITAS, and 24 MK-82s to the Armed Forces of the Philippines,” national security adviser Robert O'Brien said during a visit to the Philippines, according to a transcript of his remarks provided by the State Department.

President Donald Trump had pledged to provide $18 million worth of missiles during a phone conversation with Philippine President Rodrigo Duterte in April.

“This assistance will support the Armed Forces of the Philippines’ efforts to defeat [the Islamic State – East Asia] in the Southern Philippines,” the State Department said in a statement Monday.

TOW — tube-launched, optically tracked, wire-guided — antitank missiles fired from an Apache attack helicopter were used by U.S. forces in Iraq during the July 23, 2003, assault that killed Iraqi dictator Saddam Hussein’s sons Uday and Qusay in the city of Mosul.

The ITAS — Improved Target Acquisition System — which also saw action in Iraq, is an antitank thermal imaging system allows gunners to see differences in temperatures between men, machinery and the environment.

“This transfer underscores our strong and enduring commitment to our critical alliance,” O’Brien said, noting the allies’ battle against Islamic extremists and concerns over territorial disputes in the South China Sea.

The arms transfer signals continuity in the U.S.-Philippines defense relationship despite the ups and downs of recent years, Ian Chong, an associate professor of political science at the National University of Singapore, told Stars and Stripes in an email Wednesday.

“The same can be said of the military assistance,” he said.

China has used “gray zone” tactics — actions short of armed conflict such as occupying disputed territory and harassing fishermen — to advance its claims to virtually all the South China Sea over neighboring countries, including the Philippines.

The new weapons’ impact in the South China Sea would depend on the scenario and the political will in Manila, Chong said, but added: “Using such capabilities against gray zone activities risk unwanted and difficult to control escalation.”

Much will come down to the appetite for risk in Manila at moments of crisis, he said.

Critics in the United States have objected to arms sales to the Philippines, where thousands of extrajudicial killings have occurred during Duterte’s war on illegal drugs.

The extrajudicial killings mean the U.S. shouldn’t provide arms to the Philippines, William Hartung, director of the Arms and Security Project at the Center for International Policy, wrote in a 28 May opinion article for The Hill.

“People are being gunned down in the streets without benefit of a trial or formal charges,” he wrote.

However, people concerned about human rights abuses shouldn’t worry about the latest transfers, Ralph Cossa, president emeritus of the Pacific Forum think tank on Hawaii said in an email the same day, noting the difference between small arms used in the drug war and the recently transferred bombs and missiles.

The Philippines remains a U.S. ally, at least on paper, so arms transfers are not unusual or inappropriate, he said.

Since 2015, the United States has delivered more than $650 million worth of planes, ships, armored vehicles, small arms, and other military equipment to the Philippines, while training side-by-side with our Filipino allies, the embassy said in its statement.