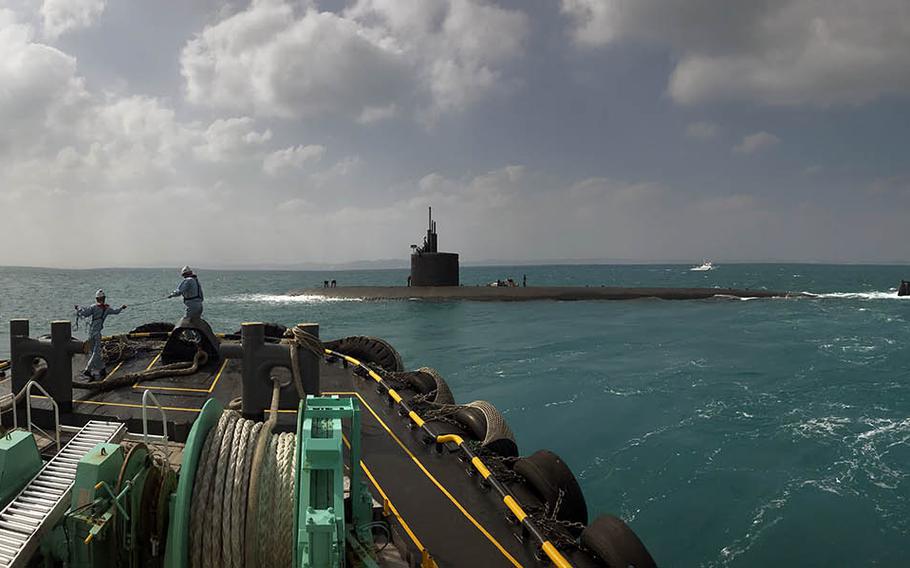 A Los Angeles-class submarine, like the one shown here Oct. 27, 2018, is taking part this week in the Japan Maritime Self-Defense Force Submarine Competition. (Robert Gulini/U.S. Navy)

YOKOSUKA NAVAL BASE, Japan – The U.S. Navy has sent a Los Angeles-class attack submarine to waters south of Japan to partake in the Japan Maritime Self-Defense Force Submarine Competition that began Wednesday.

Aside from the U.S. submarine, the weeklong competition this year will feature five JMSDF ships, to include the Hyuga-class helicopter destroyer JS Ise, four JMSDF aircraft wings, several JMSDF submarines and an aircraft squadron, according to a Navy statement released Tuesday.

The competition stands as a test for all crews across numerous platforms to gauge proficiency in anti-submarine warfare.

The Navy did not identify the U.S. submarine taking part in the competition.

While the primary purpose of the competition is to assess the ability of Japanese crews in a multitude of anti-submarine warfare scenarios, including a U.S. submarine provides the opportunity for “valuable bilateral cooperation” between the two allied forces, Capt. John Stafford, Submarine Group 7 deputy chief of staff for operations, said in the statement.

“This is the kind of anti-submarine exercise our crews train for at home and practice at sea,” he said. “We’re pleased that our boat will have the opportunity to put their training to good use and we look forward to the opportunity to showcase our skills while working with our Japanese counterparts in a forward-deployed environment.”

While the exercise is underway, a U.S. Navy sonar technician with the U.S. Pacific Fleet Navy Data Center will operate alongside the crew of a JMSDF submarine, according to the statement.

“We are very pleased to have a U.S. Navy submarine play a role in this year’s submarine competition,” said JMSDF Capt. Toshiaki Hoshina, deputy chief of staff for operations, Commander, Fleet Submarine Force. “Their participation will significantly improve our interoperability and strengthen the partnership among our forces.”

The crew with the top performance throughout the exercise will be presented with the Japanese Battle Efficiency Award.