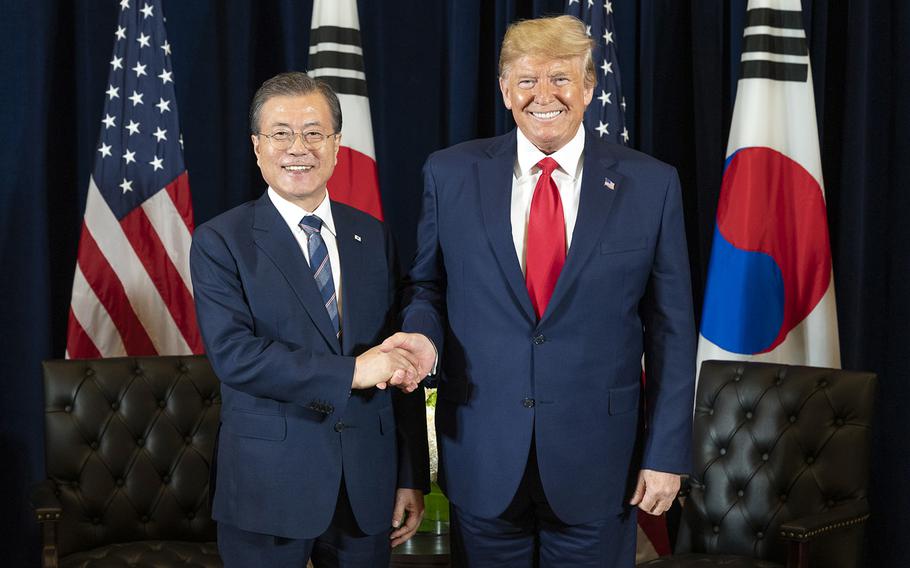 SEOUL, South Korea — With a Dec. 31 deadline looming, the United States and South Korea agreed to work toward a “reasonable and fair” military cost-sharing deal as negotiators wrapped up the first round of talks on Wednesday, the foreign ministry said.

U.S. demands that Seoul pay more for stationing some 28,500 American troops on the divided peninsula have raised pressure on the longtime alliance as the two sides are trying to get nuclear talks with North Korea back on track.

“South Korea and the United States agreed to continue the negotiations for sharing the cost at a reasonable and fair level based on mutual respect and trust as allies in a dynamic and new negotiating environment,” the foreign ministry said. “Both sides shared the view that the [South Korean]-U.S. alliance is stronger than ever.”

The next round of talks is to be held next month in the United States.

The two sides missed last year’s deadline after months of fraught bargaining but agreed in February on a stopgap measure that required South Korea to pay 1.04 trillion won ($920 million at the time) for 2018.

That was an 8.2% increase from the previous year. However, the contract was for only one year, instead of the usual five years, and is due to expire at the end of this year.

South Korean media have reported that the Trump administration has sought a fivefold increase to about $5 billion a year by including payment for the deployment of bombers and other strategic assets in addition to the traditional labor costs.

Negotiations over the agreement, which have taken place since 1991, have always been difficult. But the current discussions come as the allies face new challenges after the South Koreans ended a U.S.-backed military intelligence sharing agreement with rival Japan.

North Korea also has stepped up criticism of the alliance, which it considers an existential threat, as it seeks security guarantees as well as sanctions relief in exchange for possible concessions over its nuclear weapons program.

Trump has consistently called for South Korea to increase its contribution, in line with his general position that U.S. allies should pay more for their own defense. He and South Korean President Moon Jae-in also discussed the issue during a summit Monday on the sidelines of the United Nations General Assembly in New York.

“We are also revitalizing our alliances by making it very clear that all of our partners are expected to pay their fair share of the tremendous defense burden which the United States has borne in the past,” Trump reiterated during his speech Tuesday at the General Assembly.

In August, he tweeted that South Korea was “a very wealthy nation” and had “agreed to pay substantially more money to the United States in order to defend itself from North Korea.” South Korean officials stressed at the time that negotiations had not yet begun.

South Korea insists that it has paid nearly half of the $2 billion cost for stationing U.S. troops in South Korea annually as well as funding the nearly $11 billion expansion of Camp Humphreys, the new U.S. military headquarters base south of Seoul.