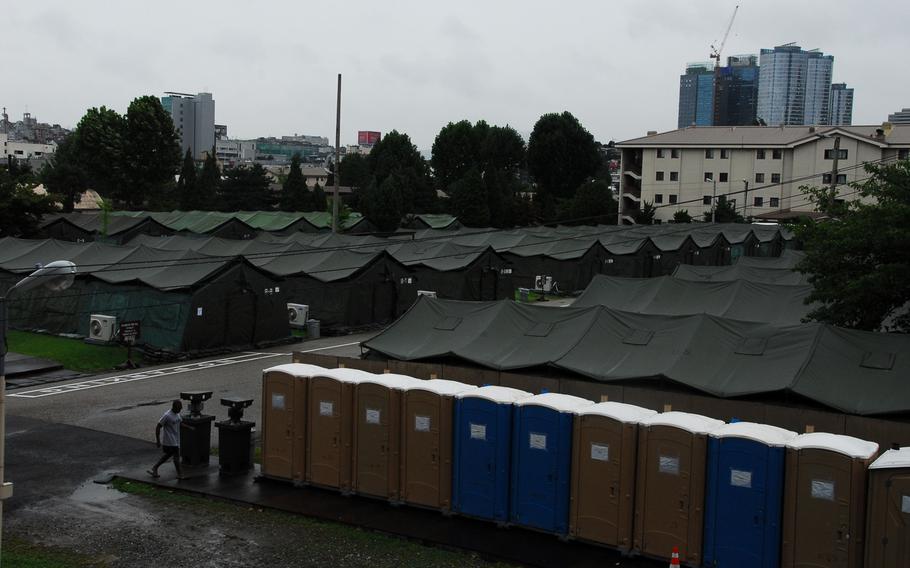 A soldier walks to a toilet at a tent city at U.S. Army Garrison Yongsan's Camp Coiner on Monday, the first day of the annual U.S.-South Korean Ulchi Freedom Guardian exercise. Approximately 50,000 South Korean troops and 30,000 U.S. troops are taking part in the computer-simulation exercise, including 3,000 U.S. servicemembers stationed on the mainland U.S. or in other overseas locations outside South Korea. About 28,500 U.S. troops are regularly stationed to the peninsula. (Ashley Rowland/Stars and Stripes)

SEOUL, South Korea — The U.S. and South Korea kicked off their annual summer war games on Monday following a weekend of increased bluster from North Korea.

Approximately 50,000 South Korean troops and 30,000 U.S. troops are taking part in this year's computer-simulation Ulchi Freedom Guardian exercise, according to South Korea's Ministry of National Defense and Joint Chiefs of Staff. Of the American participants, some 3,000 are from the mainland U.S. and other overseas locations.

The exercise will end on Aug. 29, according to U.S. Forces Korea.

While exercises are often announced in advance, the first official mention of the drill from the U.S. side came late Monday afternoon in the form of a press release.

"UFG is routine and defense-oriented, designed to enhance readiness, protect the region and maintain stability on the Korean peninsula. UFG is planned months in advance and it is not connected to any current world events."

North Korea has been notified of the UFG dates and the "routine, defensive nature of the exercise," according to the press release.

North Korea started firing off rockets on Thursday – the same day Pope Francis arrived in Seoul for a five-day visit to the peninsula.

While USFK typically highlights the routine nature of the yearly exercise, Pyongyang views UFG as preparation for invasion and usually responds with threats and warnings. However, North Korea later claimed the launches commemorated the 69th anniversary of Korean independence from Japan, according to The Associated Press.

On Sunday, the North's official Korean Central News Agency denounced the exercise and threatened a "merciless preemptive strike" that would turn U.S. and South Korean bases into "a sea in flames and ashes."

The MND responded with a vow to counteract any provocation, and said the nation was stepping up its monitoring capabilities and defensive posture during the war games.

Along with the war exercise, the South Korean government on Monday kicked off a four-day emergency drill involving public agencies across the country, the JCS said. The drill is intended to test the government's ability to respond to provocations from the North and terrorist attacks.