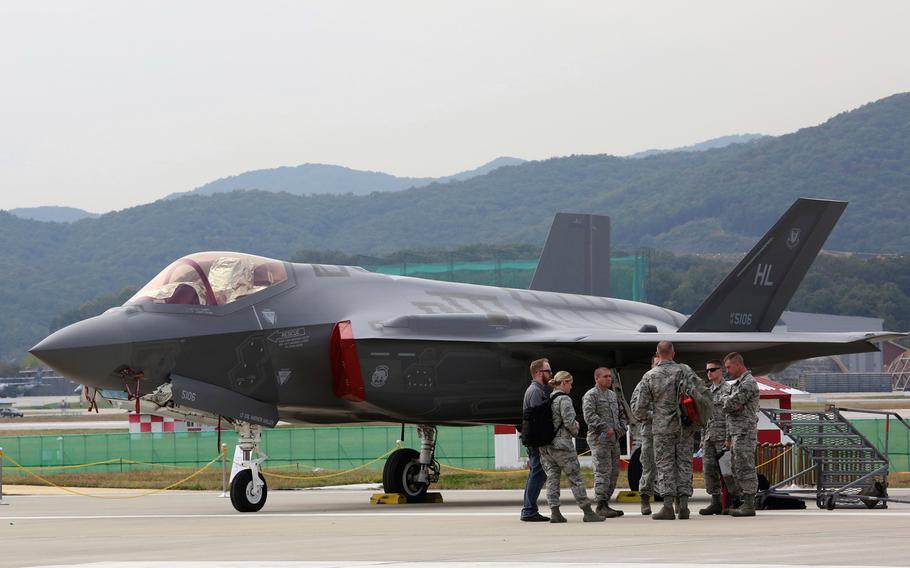 A U.S. F-35 stealth fighter is seen during the press day of the 2017 Seoul International Aerospace and Defense Exhibition at Seoul Airport in Seongnam, South Korea, Monday, Oct. 16, 2017. (Ahn Young-joon/AP)

SEOUL, South Korea — The United States and South Korea postponed joint military exercises that had been slated to start next week due to the coronavirus crisis, the allies said Thursday.

The U.S. military also reported that a South Korean employee had tested positive for COVID-19 in the southeastern city of Daegu — its third confirmed case.

Only one American soldier has been infected so far. The widow of a military retiree who had base access also contracted the pneumonia-like illness, U.S. Forces Korea said earlier this week.

Meanwhile, the State Department urged Americans to reconsider travel to South Korea, and the Indo-Pacific military command barred all nonessential service members and Defense Department-affiliated civilians from traveling to South Korea as officials struggled to contain the respiratory virus.

South Korea raised its alert level to severe as the number of confirmed cases nationwide jumped to 1,766 on Thursday, with 13 deaths. Most of the infections – including the first American service member to test positive – have been in Daegu and surrounding areas.

The Daegu Army garrison released details on Thursday after analyzing the on-post locations recently visited by the 23-year-old infected soldier, who was stationed at Camp Carroll. He was taken to Camp Humphreys by ambulance and placed in an isolation unit after he was confirmed as positive on Wednesday.

He was at the Materiel Support Command-Korea headquarters on Camp Carroll on Feb. 18, 20, 22 and 24. The soldier, who lived with his family off-post, also was in the parking lot of the Army clinic on Camp Walker on Feb. 24.

Finally, he used the bathroom at the gym on Camp Carroll and went to the Troop Medical Clinic on Camp Walker on Feb. 25.

The garrison did a similar breakdown of base facilities visited by the widow of a military retiree who tested positive for the virus earlier this week.

“We have contacted those people who are at risk of exposure, and they have been quarantined,” the garrison said on its Facebook page, reassuring the 9,000-strong local military community that affected facilities had been cleaned before reopening.

The South Korean employee who tested positive worked at Camp Carroll but had not had any contact with the military community since Feb. 20, U.S. Forces Korea spokesman Col. Lee Peters said.

South Korean health authorities determined that no trace history was required because the man had been self-quarantined at home since his wife had tested positive, Peters said.

“We have had our third case that is a USFK-affiliated member,” he said in a live update on Facebook. “So, Daegu and the team are conducting their battle drills that we’ve developed … to mitigate all potential risk down there.”

The announcement about the computer-simulated exercise had been expected after Defense Secretary Mark Esper said earlier this week that the allies were considering scaling them back.

The two countries already have reduced the scope of the exercises, a linchpin of the decades-old alliance, as part of diplomatic efforts to persuade North Korea to give up its nuclear weapons.

The allies “made the decision to postpone the combined command post training … until further notice,” according to a statement released by the U.S.-led Combined Forces Command.

It stressed the need to prioritize the safety of U.S. and South Korean service members. The U.S. military has implemented restrictions on movements and base access in a bid to contain the pneumonia-like illness.

“The decision to postpone the combined training was not taken lightly,” the statement said. “The [South Korean]-U.S. alliance remains committed to providing a credible military deterrence and maintaining a robust combined defense posture to protect [South Korea] against any threat.”

South Korea Gen. Park Han-ki, chairman of the joint chiefs of staff, initially raised the idea, and USFK commander Gen. Robert Abrams agreed “based on the severity of the present COVID-19 situation within South Korea,” according to the statement.

Most of the infections have been in the southeastern part of the country as the outbreak is believed to have begun with an infected woman who attended services at a church run by a secretive religious movement.

The U.S. Indo-Pacific Command’s announcement limiting nonessential travel said it was based on a Centers for Disease Control and Prevention travel health notice and applies to all military, civilians, and contractors under its authority.

Col. Michael Tremblay, the garrison commander for Camp Humphreys, said Thursday that military authorities were still working on what that would mean for people preparing for an assignment on the divided peninsula.

Families who had already arrived for an assignment at Army garrison Daegu, which is at the epicenter of the outbreak, were being housed at Camp Humphreys for the time-being, he said in response to questions from the community.