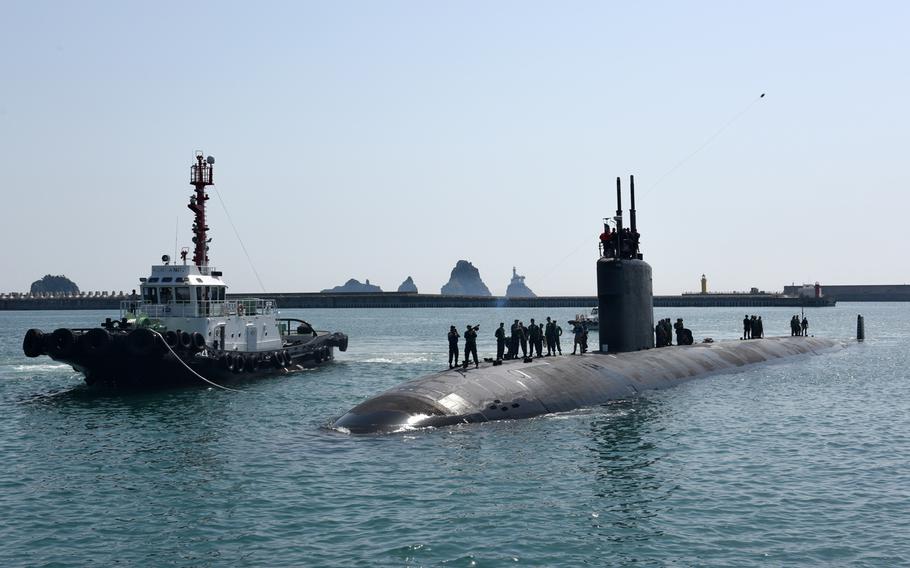 The Los Angeles-class fast-attack submarine USS Pasadena pulls into Busan for a scheduled port visit on May 1, 2015. (Abraham Essenmacher/U.S. Navy)

SEOUL, South Korea — South Korea’s news agency reported Monday that the U.S. and Seoul were discussing the deployment of B-52 bombers or nuclear-powered submarines to the peninsula as three days of marathon talks have not eased the latest crisis between the rival Koreas.

“South Korea and the U.S. are reviewing the timing of the deployment of strategic U.S. military assets,” Defense Ministry spokesman Kim Min-seok told a news briefing Monday. He did not specify what assets the U.S. might send but said Seoul is emphasizing deterrence against North Korean aggression.

A Pentagon spokesman later Monday confirmed the two nations had discussed the “next steps” the countries might take in response to North Korea’s increased hostilities, but he declined to provide specifics.

“We’re closely monitoring the situation in North Korea, we’re in close contact with our Republic of Korea allies, and we remain committed to their defense,” Navy Capt. Jeff Davis said.

Shows of force are not uncommon when relations between the two countries worsen. In 2013, the U.S. sent two B-2 stealth bombers on a training mission to South Korea and positioned a guided-missile destroyer off the peninsula’s southwest coast after a series of bellicose statements from the North.

Tensions have been mounting since two South Korean troops were wounded three weeks ago in a land mine blast blamed on North Korea. After the incident, South Korea began blasting propaganda over the border — a move that incensed the North.

The decision to hold talks came hours ahead of a Saturday deadline set by North Korea for the South to dismantle the loudspeakers. Pyongyang had declared that its front-line troops were in full war readiness and prepared to go to battle if Seoul did not back down.

A spokesman for South Korea’s Defense Ministry said more than 50 of the North’s submarines, representing about 70 percent of its fleet, have left their bases. Their locations were not known. North Korea recently claimed it has developed the capability to launch submarine-based ballistic missiles, but U.S. officials asserted the supporting video appeared to have been faked.

Recent mobilizations of North Korean troops at sea and on land caused concern at the Pentagon, Davis said, but the North’s actions have not risen “to the level of causing us alarm.”

South Korea said that even as the North was pursuing dialogue, its troops were preparing for battle.

The U.S. and South Korea are currently in the middle of their annual Ulchi Freedom Guardian computer command-and-control exercise. About 80,000 South Korean and U.S. troops are taking part in the war games, which end Friday. The allies took the unusual step of briefly halting the drill on Thursday following the exchange of artillery fire along the Demilitarized Zone.

The North views military exercises as a threat and, as happens during virtually every exercise period, has demanded a halt to UFG.

The exercise, Davis said, will continue as planned through Aug. 28.

In a posting on its Facebook page about 10 a.m., U.S. Forces Korea said it is “observing the ongoing high level inter-Korean talks and understands (their) impact on the future of the Korean peninsula.” But that appeared to back off a more optimistic posting two hours earlier: “We remain encouraged by the ongoing high-level talks and the potential for positive inter-Korean relations.”

Stars and Stripes reporter Corey Dickstein contributed to this article.