US soldier, civilian plead guilty to robbing $65,000 from currency exchange on Okinawa 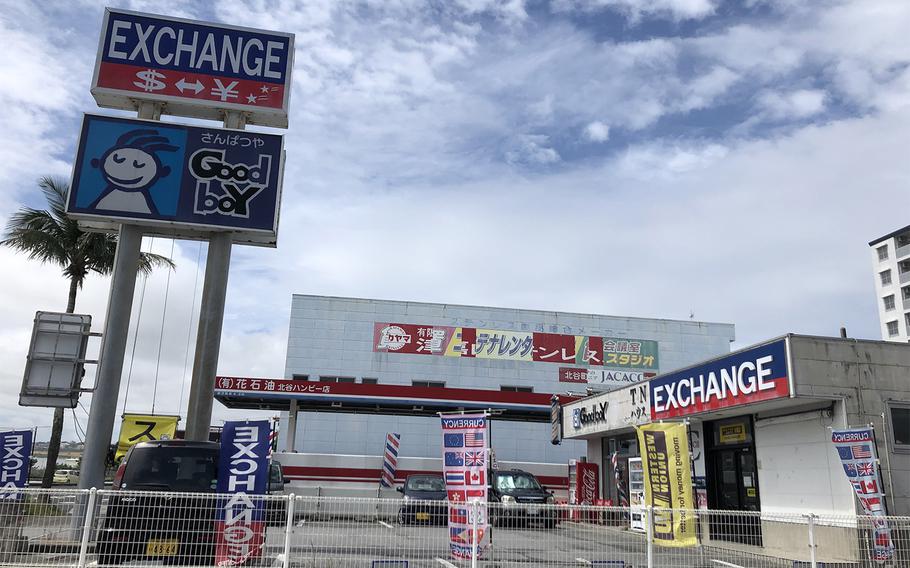 Okinawa police say this currency exchange shop near Camp Foster was robbed by two English-speaking masked men on May 12, 2020. (Aya Ichihashi/Stars and Stripes)

NAHA, Okinawa — Two men from Kadena Air Base, a soldier and a civilian cook, during their first appearance in Naha District Court pleaded guilty Monday to robbing a currency exchange on Okinawa of nearly $65,000 on May 12.

Pvt. Demetrius Moton Jr., 21, and Hassan Smith, 34, a cook for Kadena’s Child Development Center, were charged with robbery and invasion of a building. The pair, wearing masks, robbed a currency exchange near the Camp Foster front gate at knifepoint and made off with $64,700 in Japanese and U.S. currency.

Moton told a three-judge panel that he brandished the knife and demanded the money.

“First, I asked to exchange the money, then I jumped over the counter,” he said. “Inside, I told the victims to step back, but the man pushed me, so I grabbed the knife with my right hand to scare him. He stepped back so I grabbed the money.”

No one was injured in the robbery.

Moton told the panel he was getting kicked out of the Army and needed the money for his wife and children.

“I was worried that I won’t be able to provide for my family in the States, as COVID-19 pandemic and all, there are no jobs in the States and the government locked down the economy,” he said. COVID-19 is the respiratory disease caused by the coronavirus.

As a reminder of the ongoing pandemic, everyone in the courtroom was required to wear masks.

The two, both in custody, will be back in court 10 a.m. Monday for the hearing’s conclusion. Smith’s wife is scheduled to testify and both defendants are slated to read letters to the victims. The same panel is expected to sentence the pair following the conclusion of testimony.

Smith, in his testimony, said the robbery was Moton’s idea. He said Moton asked for his help; the original plan didn’t call for him to be inside the exchange.

“I was stupid, I just wanted to help him out,” Smith said, adding he didn’t need the money.

“I didn’t threaten nobody,” he said. “I didn’t see Moton’s knife. I was outside of the counter when it happened.”

Moton said they divided the money evenly. He exchanged the yen for dollars, sent some to his family and gave some to a local girlfriend identified only as “Ms. Bennet.”

Smith, who has five children under age 7, said he hid his share from his wife and then sent it to a friend in Germany. He choked up and sobbed when asked about his family.

“I regretted it the moment I came home,” he said.

Smith said he confessed immediately when Japanese police and Air Force investigators arrived at his house three days after the crime.

“I am truly sorry for the victims,” he said. “I had never done anything like this my entire life.”

“I am sorry to the victims for what I did, and I will pay back what I had sent to my family in the States and the money I gave to Ms. Bennet if I have a chance,” he said.

“I hope the victims will forgive me and the judges will give us the mercy,” he said. “I just want to go home for my wife and children.”