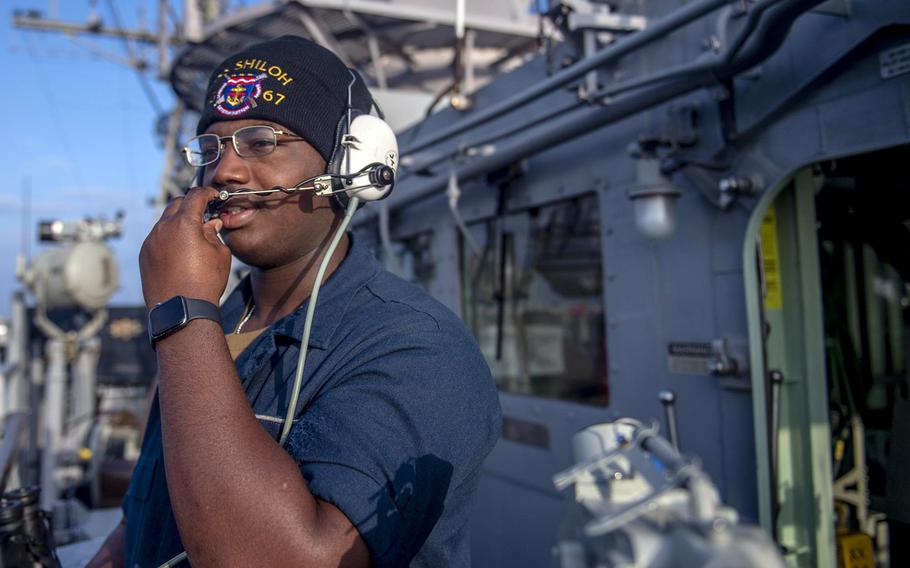 YOKOSUKA NAVAL BASE, Japan – The U.S. Navy has sent a warship through the Taiwan Strait for the first time this year, less than a week after a separatist president was reelected the island’s chief executive.

“China paid close attention to and monitored from start to end the passage of the US military vessel through the Taiwan Strait,” Geng said. “The Taiwan question is the most important and most sensitive issue in China-US relations as it bears on China's sovereignty and territorial integrity.”

The Shiloh’s passage came less than a week after Taiwan President Tsai Ing-wen – a pro-democracy, pro-separatist advocate – won a second term in an election that drew a large turnout. Her reelection was interpreted as a rebuke to China’s efforts to attract what it regards as a breakaway province.

“We must work to keep our country safe and defend our sovereignty,” Tsai was widely quoted as saying in Taipei after the election.

The U.S. considers Taiwan’s status unsettled, but adheres to the “One China” policy, acknowledging that China asserts sovereignty over the island.

In a tweet last week thanking Secretary of State Mike Pompeo for his congratulations on her reelection, Tsai said, “Taiwan is and will ever be great friends of the U.S.”

“We are grateful for the actions you’ve taken to protect free markets, democracy and freedom around the world,” Tsai said. “Taiwan stands with you & we will be that bastion of freedom in the Indo-Pacific.”

The U.S. last year sent 11 ships through the Taiwan Strait on eight separate transits, most recently with the USS Chancellorsville on Nov. 12. It was a significant increase from 2018, when the U.S. made just three passages through the strait.

Though the pace of the transits sped up last year, the number did not reach that of 2016, when the Navy sent vessels through the waterway 12 times, according to a May 3 report by the South China Morning Post.

China regularly objects to U.S. transits through the strait, which it considers its territorial waters. The U.S. considers them international waters, and thus fair for any country to sail through without requesting permission.