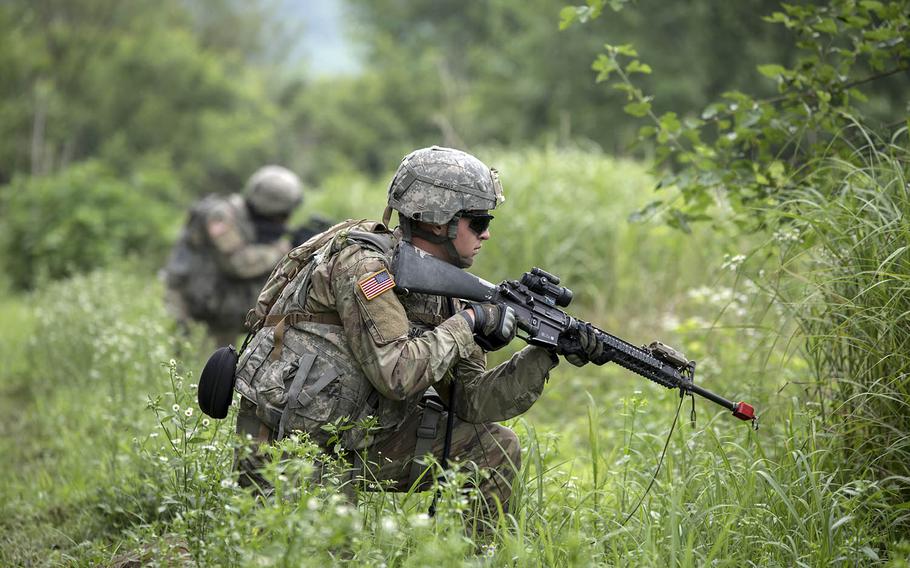 SEOUL, South Korea — The U.S. and South Korean presidents will meet before Donald Trump’s summit with the North, officials said, as the allies insisted American troops won’t be on the table in upcoming nuclear negotiations.

The White House said the May 22 summit between Trump and South Korean President Moon Jae-in in Washington “affirms the enduring strength” of the alliance between the two countries.

Trump said Friday he won’t use the linchpin of that alliance — the U.S. military presence on the divided peninsula — as a bargaining chip in his talks with the North.

“Troops are not on the table,” he told reporters Friday at Andrews Air Force Base, Md.

But he didn’t rule out the eventual removal of some troops, suggesting the issue could come up in separate cost-sharing negotiations with the South.

Trump also said the White House and Pyongyang had settled on a date and location for their first-ever summit. He didn’t reveal those details but has previously said the meeting would be held later this month or in early June.

Some 28,500 U.S. servicemembers are based in South Korea, although U.S. Forces Korea says that number can swell to 32,000 with rotational units and ongoing exercises.

The New York Times reported Thursday that Trump has ordered the Pentagon to prepare options for drawing down American troops in South Korea, citing several people briefed on the deliberations.

The officials declined to say whether Trump was seeking options for a full or partial reduction but stressed that rethinking the size and configuration of the force was overdue, according to the Times.

“The president has not asked the Pentagon to provide options for reducing American forces stationed in South Korea,” he said.

The U.S. military presence in South Korea has been a source of contention with the North and its benefactor China since the 1950-53 war on the peninsula ended in an armistice instead of a peace treaty.

Officials said Kim didn’t raise the issue in his summit last week with Moon and isn’t expected to do so with Trump.

But the rapidly evolving peace process has raised questions about whether U.S. troops would be needed if a formal treaty is signed.

Retired Lt. Col. Daniel Davis, who served as an adviser to the South Korean military in the 1990s, noted the United States has troops elsewhere in the region, including 50,000 in Japan.

“The South Korean military is very powerful and certainly capable of defending themselves against any absurd attack that the North may do,” he said.

“So we don’t lose anything strategically,” he said. “We don’t lose any ability to respond anywhere in Asia or on the seas or in the air that we have right now if we take those out of South Korea.”

Moon and Kim agreed to work toward a peace treaty by the end of the year and to seek the “complete denuclearization” of the peninsula.

Moon insisted Wednesday that U.S. forces would not be part of the deal after one of his most trusted advisers, Moon Chung-in, raised the issue in a magazine article.

“U.S. Forces Korea is a matter regarding the U.S.-South Korean alliance. It has nothing to do with signing peace treaties,” spokesman Kim Eui-kyeom quoted the president as saying.

Trump has frequently raised the possibility of removing troops from South Korea on the campaign trail and since taking office.

He argues that South Korea should shoulder more of the burden for its own defense and having U.S. troops on the peninsula has not stopped the North from developing nuclear weapons.

Under the current agreement, South Korea pays about $900 million, or half of the cost for maintaining U.S. forces. It also funded nearly the entire $10.7 billion in construction costs for the expansion of Camp Humphreys as part of the long-delayed relocation of the military headquarters from Seoul.

White House Chief of Staff John Kelly, a retired Marine general, talked the president out of ordering a total withdrawal from the peninsula in a “heated exchange” before the Feb. 9-25 Winter Olympics began in South Korea, NBC News reported earlier this week, citing two anonymous officials.

The U.S. and South Korean militaries insist their alliance is stronger than ever, but Defense Secretary Jim Mattis suggested last week that troop presence could be on the table in talks with the North.

“That’s part of the issues that we’ll be discussing in the negotiations with our allies first and, of course, with North Korea,” Mattis told reporters when asked if U.S. troops would be needed on the peninsula if a peace treaty is reached. “The diplomats are going to have to go to work now.”

The move to change the force structure on the peninsula isn’t unprecedented.

Former President Jimmy Carter tried to withdraw them after taking office in 1977 but failed after hitting a wall of opposition from his top aides.

Richard Nixon withdrew about a third of 60,000 servicemembers in 1971 despite strong opposition from the South.

George W. Bush shifted many of the troops to Iraq in the years after the U.S. invaded that nation in 2003. His father, George H. W. Bush, removed tactical nuclear weapons from South Korea in the early 1990s.

Stars and Stripes reporter Corey Dickstein contributed to this report from the Pentagon.